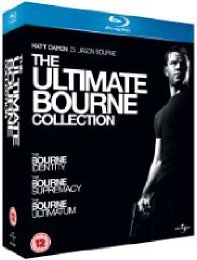 Article
The Cry of the Owl hits DVD in April

Article
Dragon Hunter - A Hero Becomes a Legend in May

Back in about 1981, aged 13, I picked up my first Robert Ludlum novel from my school library.  I can't remember if it was The Bourne Identity or The Matarese Circle, but both rather superb novels were quickly devoured in quick succession.  Ludlum was my first real favourite author with his rather complicated plots and a mix of cold war espionage with intrigue.

The Bourne Identity was a pleasing combination of fiction and real life as amnesiac hero Jason Bourne was initially sent out into the field to surpass in reputation and then flush out real-life assassin Carlos The Jackal, a mission complicated by his loss of memory and the fact that his handlers now believed he had turned and therefore decide to hunt him down.  In my head this story worked well, and then in the late 80's it all got a little ruined by the king of the TV mini-series, Richard Chamberlain.  In a rather lame and dated attempt at bringing the complexity of Bourne to the TV screen, Chamberlain and co-star Jacqlyn Smith (ex-Charlie's Angels) only succeeded in sucking the tension out of the story whilst adding perms, shoulder pads and 'smouldering' love scenes.

Then came word in the new millennium that another version of this tale was coming, this time starring wunderkind actor Matt Damon.  I wasn't convinced by this news, I felt Damon was too young looking and too soft to play the rather grizzled and chiselled featured secret agent I had in my head.  I was so wrong.  Damon was a natural and was so successful that he made two sequels.  Of course, some things had changed and not only was Carlos The Jackal ripped out of The Bourne Identity (no longer relevant in the 21st Century) but the two sequels bore no resemblance to the corresponding books from which they took their name.

Anyhow, now you can pick up all three films on Blu-ray in this handy collection.

A bullet riddled Jason Bourne (Matt Damon) is fished out of stormy waters by some French fishermen.  Treating Bourne's wounds, the ship's doctor also discovers a capsule inserted into Bourne's body that provides account details for a Swiss bank account.  Unfortunately Bourne can remember nothing as he is suffering from a bout of amnesia and once ashore decides to make his way to Switzerland to try and find out what has happened to him.

Even more unfortunately for him, US official Walker Conklin is panicking a bit when his prized asset doesn't report in from his latest mission and decides it's time to clean up and eliminate Bourne.  A minor conflagration at the US embassy leads Bourne to Marie Kreutz (Franka Potente), whom Bourne persuades to drive him to Paris for $20,000.

Once there, all hell breaks loose.

Bourne and Marie are living quite happily in Goa, but not for long.  A CIA operation to buy information is blown by assassin Kirill (Karl Urban) and Bourne is framed for the murder of the CIA operative involved, bringing the might of the US intelligence agency down on him, led by Pamela Landy (Joan Allan) under the watchful eye of Ward Abbott (Brian Cox).

The presence of Kirill in Goa leads Bourne to believe his cover is blown and he and Marie attempt to flee, an attempt that leaves Marie dead and a grieving Bourne is now out for some straight forward revenge on those he thinks are responsible…

Beginning virtually straight after the end of the previous film, with Bourne wounded and still fleeing from the CIA.  Then a newspaper column about him in The Guardian by reporter Simon Ross (Paddy Considine) and the mysterious Operation Blackbriar brings Bourne to London to try and find out more.  Unfortunately the reporter appears unaware of key word intercepts and the mentioning of Blackbriar on his cellphone to his editor trips the alarms at the CIA and assets are deployed to try and find out what Ross knows.  It turns out that Blackbriar is the successor to the ill-fated Treadstone operation that spawned Bourne and Bourne starts to regain some memories of his initiation into this black op.

CIA Deputy Direct Noah Vosen (David Strathairn) is amazed to find that Ross's contact may well be Jason Bourne and orders the death of both men, to the chagrin of Pamela Landy (Joan Allan) who has been brought into the fold as a patsy if it all goes wrong.  Whilst a Guardian reporter is relatively easy to take out in a crowded Waterloo, killing Jason Bourne is not so simple and the one-time assassin becomes the hunter…

The picture is superb, a must-have upgrade from DVD - it's much sharper and detailed, and this can especially by seen on the cityscape wide shots in particular.

There are a lot of extras here, with a nice mix across the three films of behind the scenes footage and interviews with and about author Robert Ludlum.  The bulk of the extras appears on The Bourne Identity (roughly two hours) with about an hour apiece on the other two, although it does appear as if they're running out of ideas by the third film.

There are also some Picture In Picture extras with either on-screen information or interviews.  The information captions are well done and maintain the look and feel of the films but I'm not yet convinced of the PinP extras, mainly as I can only get them working with subtitles, but also because I'd rather watch extras separately rather than within the film - and no, I wasn't a fan of following the white rabbit during The Matrix either…

Despite the films not following Ludlum's books that closely, Damon and Paul Greengrass along with Doug Liman have put together a trilogy that have influence beyond most action films, even forcing the Bond franchise to reboot (rather successfully) with Daniel Craig.  There is even talk out there that the Bourne trilogy is simply the best set of action films ever.  Not so sure about that but they are rather good…

…and quite cerebral as well for Hollywood action fodder.  Rather than have some stereotypical bad guys with a dirty great weapon, the Bourne series shows how the Intelligence community post-9/11 get so arrogant that they are willing to sacrifice anyone who gets in their way without compunction or conscience, whether civilian or one of their own.  It's also amusing to see the kind of assumptions that the CIA officials make about Jason Bourne whilst the viewer can see that despite being an automatic and rather ruthless killing machine, Bourne hasn't a clue what's going on and is changing his viewpoints due to outside influences like Marie Kreutz.

Both director's, but particularly Paul Greengrass, have a superb sense of scale and style, putting you right in the middle of the rather visceral action with both superb fight and car chase scenes.  Whilst it's blown up significantly, excuse the pun, due to the fact it's part of a blockbuster, the action feels more real than usual and part of that is due to the tightness and closeness of camera angles.  Some of the extra features that show you how they actually did it are quite fantastic, and it also helps that Matt Damon seems to be a natural at both fighting and stunt driving, performing just about everything you see on camera.  Quite an impressive performance from the main man.

I had this set on separate DVD's but it's well worth the upgrade.  It would be worth it just for the picture quality in my view, but as a combined set that you can pick up for less than £18 at the moment, it's a must-have.