Blu-ray
The Lord of the Rings: The Two Towers - Extended Edition
Related Articles

The Three Musketeers on Blu-ray 3D and DVD in February 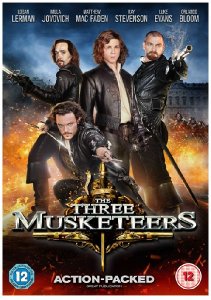 London, 14th December, 2011 - Entertainment One are delighted to announce the arrival of The Three Musketeers, which isexploding onto 3D Blu-ray, DVD, Download and On-Demand on February 27th and is available to pre-order now.

The modern take on the legendary tale is bursting with electrifying special effects, striking feats of swordsmanship, and explosive action including a mind blowing air battle. As Porthos, Athos, Aramis and D'Artagnan fight to save the very future of Europe, this is The Three Musketeers as you've never seen before.

Movie buffs will love the two-disc Blu-ray containing the spectacular 3D version of the film shown at cinemas in addition to the standard 2D feature. And both the 3D Blu-ray and DVD come in stunning 3D lenticular packaging and include revealing special features, making this one release no collector will want to miss.