DVD
The Greatest Movie Ever Sold

DVD
Billy Connolly: Journey to the Edge of the World 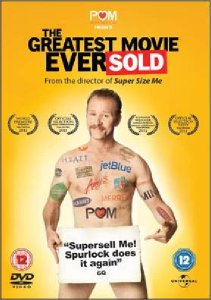 "Supersell me! Spurlock does it again" GQ

FROM THE DIRECTOR OF SUPER SIZE ME

The Greatest Movie Ever Sold

HE'S NOT SELLING OUT, HE'S BUYING IN

Boundary-pushing Oscar®-nominated filmmaker Morgan Spurlock explores the world of product placement, marketing and advertising in The Greatest Movie Ever Sold, a film that was fully financed through product placement from various brands, all of which are integrated transparently into the film.

When he gorged on McDonald's for his breakthrough feature Supersize Me in 2004, Morgan became something of a cult hero before going on to ask the question; Where in the World is Osama Bin Laden? for his next documentary that explored the fight against terrorism!

A very powerful but also irreverent brand in his own right, filmmaker Morgan Spurlock is much loved in the UK.

In The Greatest Movie Ever Sold, Spurlock exploits the film promotion phenomenon to new heights, with everything from branded pizza boxes and in-flight film promotions to branded-everything in-film.

It seems like everywhere we go someone is trying to sell us something, but have you ever wondered what goes on behind closed doors? With humor and insight The Greatest Movie Ever Soldunmasks the marketing process to bring audiences behind closed doors directly into the pitch meetings and marketing presentations which ultimately inform our everyday entertainment decisions.

The Greatest Movie Ever Sold is released by Universal Pictures on DVD with The Greatest amount of Extras you'll ever see on 27th February 2012.