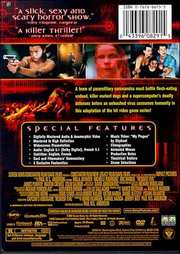 DVD
Black Hawk Down (US) 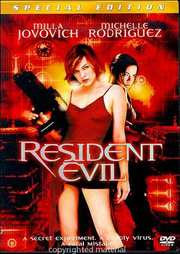 Synopsis:
A team of paramilitary commandos must battle flesh-eating undead, killer mutant dogs, and a supercomputer`s deadly defenses before an unleashed virus consumes humanity in this adaptation of the hit video game series!

Of all the stupid, plotless, tasteless movies I`ve seen recently - this one is definitely the worst.
There`s no introduction to the story and the so-called explanations are given in several flashbacks (which don`t work).
As for the story itself - well, it`s basically a "shoot whatever you can and try killing some zombies while you`re at it".
The actors are truly dreadful, but no one can blame them - it`s almost entirely the script`s fault.
The video transfer is ok. There are no compression signs and the "traditional" visual effects (makeup, puppets, etc.) are ok. However, the CG animation is really bad. It looks as if it was rendered on a PC and is totally not convincing.
The DD 5.1 soundtrack is ok. The surrounds are used effectively and will probably give you a couple of scares.
The menus are animated with sound.
The extras include a commentary by the crew, a rather extensive behind the scenes look and a dreadful music video.
Bottom line - don`t even consider it. Avoid this movie at all costs, it`s a real BOMB.
posted by Zvi Josef on 4/8/2002 02:20
7 / 10

Based on the popular games by the same name, Resident Evil is in my opinion the best Film adapted from a Videogame, which isn't very hard to do seeing as we have rancid titles such as:-

But is it any good? Well in my opinion yes, very good, but not as good as it could've been.

A paramilitary group storm into the a secret underground research facility(The Hive) and find every employ has been murdered by the Red Queen (Advanced Artificial Intelligence that runs the Hive), but soon find those same employees walking around but not the same as they where.

Not much to comment on here as the print is pretty much perfect, as it should be of a film no less than 6months old.
Presented in 1:85:1 Anamorphic Widescreen transfer with contrast and colour setting set just right.

Well we get a pretty much bog standard Dolby Digital 5.1 track, but this track has been mixed right with very good bass and rear levels, being an action film there is plenty of sound effects including gun fire, explosions and weird creatures, that go well with the DD track.

This is where it gets a little thin, with a few good extras but not a lot to please the extras junkie (like me), in fact Paul Anderson announced 2 week before this very disks release, that there will be a 2-Disk Directors cut of the film by the end of the year.

Now back to the disk in hand, extras include: -
Directors Commentary (which I've not listened to yet, will update so as I have)
5 Featurettes
Music Video (Slipknot - My Plague)

And a few text based extras.

Some body help them!, a phrase used quite alot in this ok film. The film Starts and ends in a superb way, but shame about the middle. Director Paul W.S. Anderson has no idea on what he`s doing, instead of errie music it`s bloody rock music blasting every five minutes. The zombies look crap, thats the only way to discribe them Tom Savini could do better with his eyes blind folded. The gore content is low, un like the games. In my opinion Anderson was doing an MTV film, a teenager horror movie, well he failed there. even the CGI
is rubbish.Anderson should not have directed this or wrote it. I have read the original script by George A. Romero it was way better. As for the extras, nothing that exciting. For Die Hard fans wait untill the 2 disc set comes out later this year. Going back to the extras on the commentary track Milla Jovovitch says that if this movie and the dvd sell well she`s going to have a boob job!. I say good on her!
posted by verhoeven on 29/8/2002 17:17
3 / 10

Another awful film and box office flop. Where to start? Dreadful plot, script, cast, acting, soundtrack and directing. Some of the action sequences were effective but it was too little to save this film. This is supposed to be a horror / thriller. There are no scares and no thrills. It is mildly entertaining but not enough worth a rental. AVOID. Once more, I didn`t bother with the extras.
posted by morpheus177 on 18/12/2002 16:20
8 / 10

I`ve read countless scathing reviews of this title (including some of the ones you`ll find below!), yet I honestly can`t see much wrong with it...

Ignoring the specifics of the plot, the acting and the videogame it`s based on, I think everyone should at least be able to appreciate the stellar visuals. I know the main thing I took from viewing Resident Evil for the first time was an increased level of respect for Anderson`s visual style. Yes, that`s a controversial thing to say (and some would consider it a contradiction in terms!), but the promise shown in Event Horizon is taken to the next level here IMO. I`m well aware that some readers will be guffawing and/or shaking their head in disbelief at such a comment, but I`ve found that most of the negative remarks come from people with pre-conceived notions of his work (i.e they`re prejudiced). So, casual viewers will have a more objective opinion of his latest films and the few that I`ve asked about Resident Evil (family members/work colleagues etc) all enjoyed it as throwaway entertainment. Obviously, some people will be put off by the overall tone and the trashy ideals, but if stylish B-movie fun isn`t your cup of tea, then this is a very bad choice of flick to begin with!.

So, although it`s an outlandish thing to say, I`m happy to admit that I think it`s a commendable effort which, unquestionably, looks superb (so the direction is beyond reproach in my view). Whilst the picture quality on the disc itself is technically fine aswell, I`m impressed much more by the visual frame elements (like the colours/lighting etc). I think some will be oblivious as to how far Anderson`s composition pushes the `perceived` disc quality, as although a Superbit version exists, this is just a regular disc. So, despite the encoding on the main feature being fairly bread and butter, the striking visuals make it seem like an optimum effort. I considered launching into a lengthy argument here about what exactly is so visually impressive, but (like with magic-eye pictures) if you can`t see it, then you just can`t see it and I think I`ve stuck my neck out far enough already!.

Another debatable point is the mixed soundtrack, but as I was expecting huge doses of sombre-sounding orchestra, the more electronic approach is another plus-point for me. Anderson had previously tried to get Orbital for the Event Horizon job (which got downgraded to a single track over the opening due to other commitments), so I`m glad that the idea is fully consumated here. I appreciate that some fans of the game would be disappointed by the change of style, but personally I prefer percussive adrenaline to brooding orchestrations. The more suggestive/atmospheric style of the game would have worked fine the first time around, but once I know a movie inside out, the tension and drama aren`t anything like as effective, so I`m glad that the music is more than just a tool for creating anxiety. Whatever the case, you`ve got to commend Manson`s efforts really, as it`s new ground for him and he does seem enthusiastic (by his standards) in the featurette about the score.

Basically, I liked it. I don`t think it`s brilliant or in any way intelligent, but I don`t think anyone should expect thought-provoking drama or finely-crafted dialogue from a zombie flick anyway!. I`m not just saying that as a cop-out either, as I realise that there are good and bad films in any genre, but in all seriousness, what did Anderson get wrong?. The opening is both intriguing and relevant to the story, the middle has some nice surprises regarding the characters (whether it be plot revelations or unexpected deaths) and the superb ending is probably the best thing of all...
posted by Tony Vado on 23/1/2003 23:11
8 / 10

Resident Evil isn`t that bad. Though the problem with the film is it`s director Paul W.S. Anderson, who has a problem, that problem is that he rips every thing off. Resident Evil is basically Aliens,Cube and George A. Romero`s Dead Trilogy.
In the commenatry Anderson says that he is paying homage to Cube when Colin Salmon is cut up, what the git`s trying to say is that he ripped it off. Resident Evil has it`s moments and does have a good ending.

Marco Beltrami`s score is powerful through the 5.1, the mix is very good.

The quality is also very good.

Extras:
A crap commentary from the cast and the film-makers, it does however have some insight. The 4 featurettes are interesting but not warranting a econd viewing.
posted by the_film_king on 7/8/2003 20:28