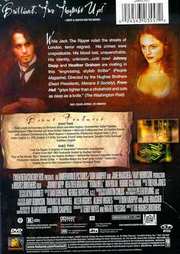 Back Cover of From Hell: Directors` Limited Edition
Related Items

DVD
Return of the Living Dead, The (US)

DVD
Last of the Mohicans (DTS) (US)
Related Articles

From Hell: Directors` Limited Edition (US) 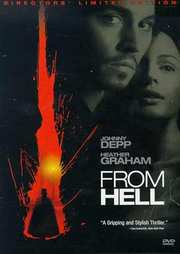 Synopsis:
While Jack the Ripper ruled the streets of London, terror reigned. His crimes were unspeakable. His blood lust, unquenchable. His identity, unknown… until now! Johnny Depp and Heather Graham are riveting in this "engrossing, stylish thriller" (People Magazine). Directed by the Hughes Brothers (Dead Presidents, Menace II Society), From Hell "grips tighter than a chokehold and cuts as deep as a knife." (The Washington Post)

A red-headed whore, brutal murders, the British monarch and the Jews. Those seemingly different ingredients are entwined in each other throughout this movie.
The mixture makes a rather appealing thriller, despite the fact that it slightly suffers from exaggerated hallucination. I`d also have preferred a better explained ending.
The video transfer is a delight (and also THX certified). While compression signs can be spotted during the extremely dark scenes, they never interfere too much. The warm colors in the palette (the reds and oranges) are highly saturated while the cold colors (greys, blues and greens) are deliberately desaturated. The contrast between those two types of color gives the movie a very unique look and contributes a lot to the movie`s somewhat hallucinated nature. The brilliant editing and clever camera angles add even more mystery to the plot.
The DTS and DD 5.1 soundtracks are both very good. The surrounds are used for various sound effects and some ambiance.
The menus are all beautifully animated with sound. However, the titles of the various menus are sometimes difficult to read since they are written in a similar color to the picture in the background.
The extras on the first disc include a commentary by the crew and 21(!!!) deleted and extended scenes (including an alternate ending, which is only slightly different from the original one).
The second disc includes an impressive array of behind the scenes featurettes. One of the featurettes is a documentary (with extremely poor visuals and out of synch audio), and combined with the rest of the featurettes it covers the various theories regarding Jack the ripper. However, after watching all those featurettes, I realized the movie only dealt with some of the theories and didn`t give enough background information about them. That actually decreases the movie`s initial impact quite a bit.
Notice Depp during the interviews - the guy`s totally stoned. His performance isn`t that great either, but hey, at least he had a semi-decent accent.
Bottom line - an intriguing story, a very stylish production that suggests a unique (and alarming) theory to the mystery surrounding Jack the ripper. Recommended.

20th Century Fox's film From Hell, directed by the Hughes brothers, takes a stylish and compelling look at what might have been the truth behind this mystery that was, in real life, never solved.
From the opening scenes, From Hell gets high marks for both originality and visual creativity. The ambiance of the film is moody, dark, and threatening, with brilliant scarlet sunsets, yellow street lamps, darkly glistening wet cobbled streets filled with huddled, hurrying workers and desperate "unfortunates" plying their trade of prostitution on every streetcorner in the Whitechapel district of London. The visual elements fit together to create a stylish and dramatic vision of London in the late 19th century in all its grime and squalor as well as its brilliance in the homes of the rich and powerful.
The character of Detective Abberline is the perfect figure to tie the various parts of the film together thematically: he walks the borderline between the streets and high society as he works to solve crimes and prevent them; he's a man of both worlds but belonging to neither. The character of Abberline is effective plotwise as well, because he's trying to unravel the plot while simultaneously being watched and, possibly, manipulated by his superiors. Depp carries out the role quite well, showing Abberline to be a man who is brilliant at his job but at the same time drawn into danger by his addiction to "chasing the dragon": i.e. smoking opium.

The same can't be said of Heather Graham, however: she remains a weak link in the film. Graham never quite fits into the role of the prostitute; she is too unspoiled and pretty, and her accent is too patently fake, and every scene that she's in ends up with a slightly false note because of this.

From Hell comes with a DTS soundtrack as well as a Dolby 5.1 track. The DTS track is very good, with dialogue coming across crisply and cleanly along with environmental noises, and the music track well-balanced with both. It's not as aggressive in its use of surround as other DTS tracks I've heard, but the overall sound quality is sure to please.

From Hell is not a perfect film, though it comes remarkably close to being an all-round success. Heather Graham is the weakest element of the film, but with an intriguing storyline, imaginative cinematography, and an engaging performance by Depp in the central role, the film still overcomes this obstacle to stand out as being a well-crafted movie. It's visually rich, undeniably original, and certainly worth watching.
posted by Aslan on 19/7/2002 01:10
7 / 10

This film was not bad I spose johnny depp does a repeat performance of his character from sleepy hollow and heather graham puts on a measly cockney accent. All in all not bad the DVD is smart as and the extras viewable. The film has a repetitive genre especially with jack the ripper this modern adaptation to the cult killer is a hollywood money grabber.
Less of that "From Hell" is entertaining enough to watch when bored but I think the film is let down by it`s storyline.
posted by D.stent on 8/8/2002 15:06
7 / 10

I thought this film was decidedly average, it was almost a complete copy of `murder by decree` an older film starring Christopher plummer and James Mason, a far superior film which has far better interaction between it`s characters and a little more depth. I thought both Mr Depp and Robbie Coltrane were somewhat at odds with their characters and indeed with each other. The `Ripper` scenes were a little overly arty and not really savage enough, I expected more than this and this is a film I have only watched once despite buying it, I usually watch films 2-3 times but just couldn`t be bothered with this one. Good quality Video and Audio with loads of interesting extras but the movie itself was just dull.
posted by phuturephantasy on 9/8/2002 00:38