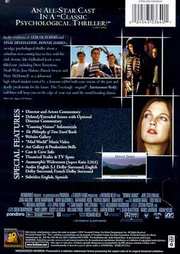 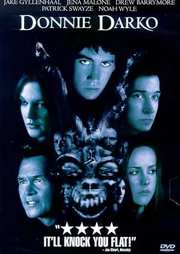 Synopsis:
In the tradition of Stir of Echoes and Final Destination, Donnie Darko is an edgy, psychological thriller about a suburban teen coming face-to-face with his dark destiny. Jake Gyllenhaal leads a star filled cast (including Drew Barrymore, Noah Wyle, Jena Malone, Patrick Swayze and Mary McDonnell) as a delusional high school student visited by a demonic rabbit with eerie visions of the past and deadly predictions for the future. This "excitingly original" (Entertainment Weekly) nail-biter will keep you on the edge of your seat until the mind-bending climax.

Director of Photography:
Steven B. Poster

A weird, somehow hallucinated and overly casted movie that starts out wonderfully, but looses its grip during the last couple of scenes.
Overall, it has the feeling of a "Twin Peeks" episode, but in a similar manner - gets too weird and incoherent.
The video transfer is very good. There are no compression signs and visuals are mostly impressive. The editing gets a very good "thumbs up", as well.
The DD 5.1 soundtrack is good. The surrounds are very effective in several scenes and the sound envelope is quite good (and creepy).
The menus are animated with sound.
The extras include 2 commentaries, 20(!!!) deleted and extended scenes (which don`t really add anything significant to the plot), a picture gallery and a music video.
Bottom line - despite a certain degree of incoherency, plot holes and too weird scenes, the movie is quite good throughout its first 90 minutes. Pass that point, however, it is somewhat ruined. One way or the other, you will not look at Bugs Bunny the same ever again.
posted by Zvi Josef on 20/3/2002 08:05
6 / 10

Now this is one mind warp of film that is intriguing, creepy and oftern hilarious but ultimately pretty confusing.

Picture and sound are good, the extras are really good with the two audio commentaries are really damn good.

On October 31, 1988, the world will come to an end unless Donnie Darko can set the space-time continuum right. "Donnie Darko" is one of the most original mixings of teen angst, dark comedy, drama, and science fiction to create a film that is more genre breaking than anything else. "Donnie Darko" is a troubled teenager in a suburban village. He is prone to sleepwalking, can be overly aggressive and outspoken, sees a psychiatrist, and is pretty much a normal dysfunctional high school student that feels alienated and misunderstood. Then on one evening he is visited by an apparition of an anthropomorphic, talking demonic looking bunny rabbit that informs him that in 28 days, 6 hours, 42 minutes, and 12 seconds, the world will come to an end. Then from out of nowhere a plane engine literally crashes into his bedroom.

Soon after Donnie begins an odyssey as he and everyone else around him attempt to go on with their lives with a sinking suspicion that somehow things are just not right with the universe, but only Donnie seems to be able to visualize literally subtle manipulations that are prompting him to discover his true destiny.

The film creates the world of 1988 quite plausibly without ever making a mockery of the era. The soundtrack is excellent with songs by "Echo and the Bunnymen," "Tears For Fears," and "Duran Duran" among others and the subtle touches such as the 1988 Presidential Debates, the books, and even the movies the characters see are all carefully selected to create the world of "Donnie Darko" circa 1988 believably. The film lends itself to multiple viewings and those who enjoy something more offbeat, melancholy, and cryptic will definitely get into watching "Donnie Darko." "Donnie Darko" is sort of a thinking person's teenager film that will arouse nostalgia as well as questions that can be debated regarding the circular nature of time travel that is inherent in just about every film or story that features some form of fourth dimensional exploration.

Overall, Donnie Darko has been given a great release on DVD. This is an exceptional piece of writing and filmmaking and I believe will definitely find its audience in the near future due to this DVD release. The DVD is pretty packed considering its lack of any success in its short theatrical release. The audio is very good, and the video is good when considering the flaws of the film stock used. I really cannot stress enough that people should pick up this DVD. This is the most original film I have seen in years. If you are a fan of great movies, pick this up (and if you are not a fan of great movies, pick it up anyway). HIGHLY recommended.
posted by Aslan on 21/9/2002 23:30
9 / 10

WOW! What a masterpiece. It`s the kind of movie that leaves you thinking. You have to watch it several times to form an opinion about what really happened, it will still be only you`r opinion though, for there seem to be hundreds of thm out there, wildly discussed on various forums dedicated to this movie. The soundtrack is also awesome and the extras include a video of the song Mad World that has since i saw this movie stuck in my mind. A Must See!
posted by NiM on 14/10/2002 17:13
8 / 10

Donnie Darko is a feast of special effects and cinematography. The movie has a loveable cast and a highly original screenplay. Very creative and full of surprises.

Donnie is a very intelligent teenager who doesn`t seem to fit in with his family or his school. But when he meets an imaginary friend and has visions it changes his entire life. He wakes up in a golf field one morning after having a vision only to discover part of a plane landed in his room. Did his imaginary friend save his life? Now Donnie Darko`s life is going haywire. It is only a matter of time until the end of the world according to his visions. During all this he meets a a girl who is undergoing problems in her life as well. They seem to be the perfect match. Donnie Darko turns to an old lady he believes is his only hope for stopping the world from ending. Can she help him or is there no hope?

The video in this film looks extremely sharp. The special effects are dazzling and the film transfer is crisp with no spots or static. The sound in this dvd is also good.

The special features for this dvd are quite good. There is commentary from both the actors of the film and the director. The commentary goes in depth with the film itself as long as the characters roles and direction. There are also some deleted and extended scenes with director commentary optional. The Cunning Visions Infomercials are quite enjoyable and have some more nice special effects. There is a Philosophy of Time Travel Book as in the movie itself. There is also a "Mad World" Music Video, a Art Gallery and some information about the cast and crew. All in all these are quite good features with abundant options. Better then average.

Donnie Darko is a good movie. In my opinion it is worth seeing and probably worth owning as well due to the good package with the features, content, and special effects. This film is strangely made and thought out and has some very ominous and intruiging ideas making it a blockbuster.
posted by Aaron Arneson on 22/2/2003 19:49