DVD
Dance in the Vampire Bund

The Disappearance of Haruhi Suzumiya Continues On Blu-ray

Haruhi Suzumiya won't appear on Blu-ray until February 2012 at the earliest. That was the announcement from Manga Entertainment this week, after they discovered that the Blu-ray check discs for the film wouldn't play on PS3s, a distinct problem in a world where the Sony device still dominates the HD Home Cinema market. Hurrah for Quality Control we cheer! Boo to extra delays we lament! At least the DVD is still on schedule and will hopefully tide us over for another few months. 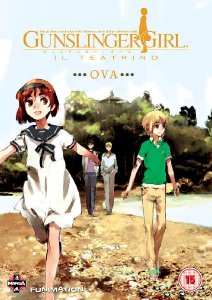 Three anime reviews for you this week, although my first, for the Gunslinger Girl Il Teatrino OVA may seem a little familiar. I got a little previous when Manga Entertainment announced that the Il Teatrino Complete Series Collection wouldn't be as complete as first thought, when it was released back in spring. My impatience got me pressing the import button before I could help myself. But the Gunslinger Girl Il Teatrino OVA is now available on UK DVD as well, and unsurprisingly it isn't all that different from the US disc. Neither is my review. 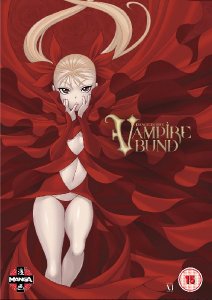 No such cut and paste to worry about with my second review, as Dance in the Vampire Bund: The Complete Series comes to the UK surfing a wave of notoriety and controversy. You have to remember that underage looking girls aren't actually underage if they are immortal vampires that have existed for centuries, and even they need some help applying that factor 5 million sunblock to those hard to reach places. If you have an issue with the subject matter, take it up with the BBFC, as they passed it. Otherwise you can enjoy another visual feast of an animation from Studio SHAFT, and a rather compelling tale of a vampire princess and her werewolf bodyguard, as she tries to set up an independent vampire nation state off the coast of Japan. 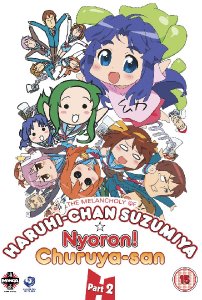 There should be a law against titles as long as The Melancholy of Haruhi-chan Suzumiya & Nyoron! Churuya-san: Part 2, but as long as cut and paste exists in MS Word, I'm not going to press the matter. The first half of the parody short animations were initially released in the UK as part of the Melancholy of Haruhi Suzumiya Season 2 boxset, and the two properties will get separate releases again in December. But Haruhi fans have been eagerly awaiting the concluding half of these shorts. Now they are here, with little child-like versions of Haruhi and the SOS Brigade getting up to more surreal antics, while in the world of Nyoron! Churuya-san, the search for the Holy Grail of smoked cheese continues.

Manga Entertainment will release the Gunslinger Girl Il Teatrino OVA, as well as Dance in the Vampire Bund: The Complete Series next Monday on the 24th of October. The Melancholy of Haruhi-chan Suzumiya & Nyoron! Churuya-san: Part 2 comes out a week later on the 31st of October. And yes, there is a sketch with a pumpkin head in Haruhi-chan.