It's that time of year when anime fans, flush with money, don their best cosplay outfits and march off to their nearest convention centre, looking for free hugs. It's also the time of year when the big companies announce their newest acquisitions. The UK's own MCM Expo is taking place next weekend, but the weekend just past was the turn of Anime Central in Illinois. Funimation had a couple of new licenses, which I feel I ought to cover, as they will very likely be UK licences in short order.

First of all was the new Fullmetal Alchemist Movie: The Sacred Star of Milos. Funimation really are ahead of the game on this one, as it is yet to see its Japanese theatrical premiere. Funimation hope to have it dubbed and disced by early 2012.

Their second announcement was the acquisition of Kore Wa Zombie Desu Ka? which they will rename Is This A Zombie? This short series was, and is still available to watch via Crunchyroll if you are intrigued, and given the current fashion for all things zombie, seems to be a sure fire eventual licence for the UK. There are more zombies in this week's reviews. 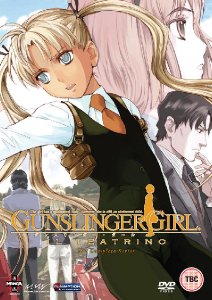 There aren't any zombies in Gunslinger Girl Il Teatrino, although healing dying little girls by replacing their damaged limbs and organs with cybernetic implants, and brainwashing them to become killers for the state comes pretty close. The original Gunslinger Girl was a superlative series from Studio Madhouse with blisteringly high production values and an emotional approach to storytelling that still ranks it as one of my favourite anime. Gunslinger Girl Il Teatrino has none of that. It's made by Artland, looks and sounds cheap in comparison, doesn't share continuity or the approach to character of the first series, but it does have a gripping story, and more than that, it has the official involvement of the manga's creator, Yu Aida. 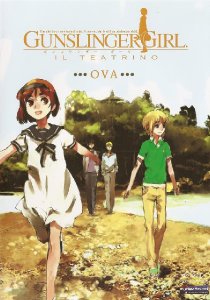 Manga were originally going to release the Gunslinger Girl Il Teatrino OVA disc with the complete series, but small print apparently scuppered that idea. They've delayed the release of the OVA until later this year. I got impatient and imported it from the US so I'd have that immediacy of watching it after the series. Now all you have to do is to read the review and try and remember it for five or six months until the eventual UK release. 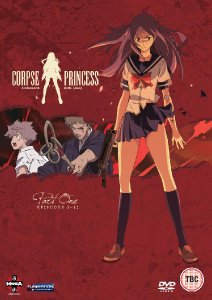 Here are the zombies! Shikabane Hime: Corpse Princess: Part 1 is the anime series with the undead, and for once, it's a horror show that I can sink my teeth into. The Shikabane are the monsters that arise when someone dies with strong regrets and obsessions in their heart. The resulting monster hates mankind, and invariably goes on a rampage. The only people to stand against this supernatural menace are the monks of the Kougon sect, but the only beings able to fight the Shikabane are Shikabane themselves. Young girls that die with regrets, if caught in time can be bonded to selected monks, the monks giving the strength to fight, and the ability to retain their humanity. In exchange the Shikabane Hime must kill 108 Shikabane to ascend to heaven and gain redemption. But all isn't as it seems in this world of the undead, as a young orphan named Ouri Kagami finds out.

Manga Entertainment released the second series of Gunslinger Girl, Il Teatrino last Monday, while Shikabane Hime: Corpse Princess Part 1 comes out today on the same label. Funimation released the Gunlinger Girl Il Teatrino OVA to the US back in 2009.