Article
Sci-Fi conclusion with Caprica: Part Two out on DVD this July 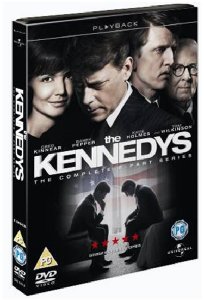 Discover the truth behind the most iconic family in American history...

"The story of America's most remarkable political dynasty"
Daily Express


THE KENNEDYS
Available on DVD from 18th July 2011

It's time to rediscover the most important moments of America's most prominent political dynasty during the Twentieth Century, as The Kennedys comes to DVD on 18th July 2011, courtesy of Universal Playback.

Key moments in the Kennedys history are charted in this sumptuous series including Election Day 1960, where America chooses between charismatic Senator John F Kennedy and his opponent Vice President Richard Nixon, the intense competition between the two Kennedy brothers, defining moments in the Kennedy administration, the special relationship between JFK and his First Lady, Jackie Kennedy and of his tragic and infamous assassination.

The Kennedys is about loyalty and love, resentment and betrayal, about people imbued with great gifts and burdened by great flaws, about success of Biblical proportions and tragedy worthy of the Greeks. Also included is a special 48 minute bonus behind-the-scenes feature "From Story to Film: The Making Of" if you are left wanting more!