Taut psychological thriller Exile is out on DVD in June 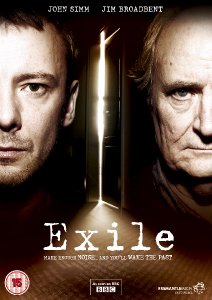 "MUST-SEE VIEWING… THERE'S A JOY TO WATCHING A DRAMA MADE WITH THE EXPERT CRAFT AND INTELLIGENCE OF 'EXILE'." - THE MAIL ON SUNDAY. John Simm (Doctor Who; Life On Mars) and Oscar and BAFTA award winning actor Jim Broadbent (Any Human Heart; Harry Potter And The Deathly Hallows: Part 2) head an all-star cast in the gripping new three-part psychological thriller, Exile, which has been described as "pure class" (The Sun), "gripping and intriguing" (Daily Mail) and "a domestic drama of impressive depth and power" (The Daily Telegraph).

Tom Ronstadt (Simm) is a journalist making a name for himself in London until a combination of booze, drugs and sexual indiscretions sees his career on the skids and his personal life in ruins. To escape the fallout, Tom returns to his family home in Lancashire for the first time in two decades, where he finds his father, Sam (Broadbent), lost in the grip of Alzheimer's and now being cared for by Tom's younger sister, Nancy (Colman).

The return home stirs up uncomfortable memories for Tom as he recalls the circumstances that led him to leave for London all those years ago. The cause of the incident in question, linked to his childhood, has always remained a mystery for him… until now. Despite his investigations into the past being frustratingly hampered by his father's failure to remember what happened, Tom persists in digging for the truth and uncovers a devastating secret far beyond his imagination and one that will change his, Nancy's and their father's lives forever.

"Superbly written" and featuring "uniformly excellent" (The Sunday Telegraph) performances by a top-notch cast, Exile is both a "taut psychological thriller" (The Guardian) and an intimate, moving portrayal of a father and son's relationship that will keep viewers hooked throughout.