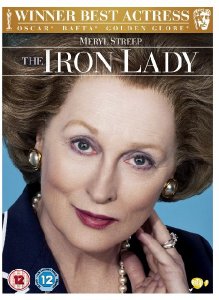 An Intimate Portrait Of One Of The 20th Century's Most Famous And Influential Women, THE IRON LADY Heads To Retail On 30th April 2012!

Considered by many to be the greatest living film actress, Streep has received an astonishing 17 Oscar® nominations over the course of her career, including a 2012 Oscar® nomination for Best Actress in a Leading Role for her portrayal of Thatcher in THE IRON LADY. Streep won a 2012 Golden Globe® award for this role, and received a 2012 Screen Actors Guild Award® nomination as well.

Directed by Phyllida Lloyd (MAMMA MIA!) from a screenplay by Abi Morgan (SHAME), THE IRON LADY heads to retail on April 30, 2012 on DVD and Blu-ray.

In his review for the New York Post, film critic Kyle Smith wrote, THE IRON LADY is "Superb! One of the best movies of the year!" Added New York Magazine's David Edelstein, "Meryl Streep is too marvelous to resist!" Rolling Stone's Peter Travers also praised Streep, calling her "Incontestably great!," while TIME Magazine's Richard Corliss hailed Streep "The best actress of the year!" Added The New York Times' Charles McGrath, "Meryl Streep does that miraculous thing she does."

The most celebrated actress of our time stars as the most powerful woman of her time. Oscar® winning Meryl Streep, the most nominated performer in Academy Award® history, delivers the definitive portrayal of Margaret Thatcher, the enigmatic, highly controversial figure who became the first and only female Prime Minister of England. Much more than a biographical epic, THE IRON LADY is also the surprisingly intimate journey of a "common" grocer's daughter whose social ambition and steel will along with the love of her husband and confidant, Denis (Academy Award® winner Jim Broadbent)  propelled her to unprecedented power in a world dominated by men.

Combining fact, fiction and poetic flight of imagination into a new breed of biopic, director Phyllida Lloyd (MAMMA MIA) creates a piercing portrait which reveals the many faces of Margaret Thatcher: the hard-nosed conservative; the woman who demolished the barriers of gender and class in a male-dominated world; the spirited wife and mother who longed to change her country for the better. Exposing the private life behind the headlines, THE IRON LADY is a moving journey into the heart of an extraordinary, complex woman.

The THE IRON LADY Blu-ray™ Combo Pack and DVD special features include a "The Making of The Iron Lady" featurette and four mini-featurettes, including "Recreating the Young Margaret Thatcher," "Battle in the House of Commons," "Costume Design: Pearls and Power Suits," and "Denis: The Man Behind the Woman." Note: Special features are subject to change.