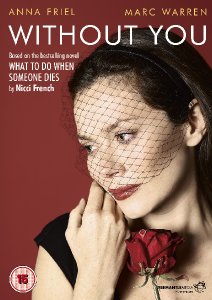 Without You, ITV1's current hit thriller series based on the bestselling novel "What To Do When Someone Dies" by Nicci French (the pen name of writing duo Nicci Gerrard and Sean French) and starring Anna Friel (Limitless; London Boulevard; Pushing Daisies), comes to DVD on 16th January 2012 and features all three episodes of the series plus bonus "making of" featurette which includes interviews with Anna Friel and Nicci French.

Anna Friel stars as schoolteacher Ellie Manning, happily married to accountant Greg, with whom she is eager to start a new family. However, Ellie's plans for a romantic dinner at home with her husband one evening are shattered when the police arrive to inform her Greg has been killed in an horrific car accident, along with a mystery female passenger. The circumstances suggest the victims were pursuing an extra-marital affair, but Ellie, stricken with grief, refuses to even contemplate, let alone believe that Greg would cheat on her.

When the passenger is revealed to be married businesswoman Milena Livingstone, a woman previously unknown to Ellie, Milena's husband's cool acceptance of the situation prompts Ellie into investigating matters further, specifically to determine why Milena was in Greg's car at the time of the accident. As she digs deeper, she becomes convinced the crash was no accident, but her obsession with discovering the truth leads those around her to question her emotional state. Meanwhile, Ellie, now unable to trust even her closest friends, is becoming suspicious of everyone, including herself.

A "gripping" (Daily Mail) and "powerful three part drama" (Daily Star) that keeps its biggest secret safe until its final, shocking revelation, Without You is a brilliantly plotted adaptation of Nicci French's compulsive page-turner.

Without You (cert. tbc) will be released on DVD (£12.99) by FremantleMedia Entertainment on 16th January 2012. Extra features include "Making of" featurette plus interviews with Anna Friel and Nicci French (authors Nicci Gerrard and Sean French).