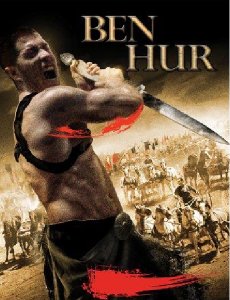 Rome Made Him A Slave… Revenge Set Him Free

London, UK. 10/11/11 - The sweeping historical adventure Ben Hur debuts on DVD January 30 from Sony Pictures Home Entertainment. Directed by Emmy® Award winner Steve Shill (TV's"Dexter") andwritten by Alan Sharp, this is an epic re-imagining of one of the greatest stories ever told, based on the novel by Lew Wallace.

Synopsis
In this new version of the colossal classic, Ben Hur delivers more action, passion and revenge than ever before. The gripping story follows two friends who become bitter enemies and the historic events of the time as told through the eyes of Judah Ben-Hur. Born a wealthy Jewish merchant's son, he is destined to live many lives: a powerful businessman, a dutiful slave, a fierce gladiator, a Roman nobleman, and finally... a conquering hero. This extraordinary adventure-filled saga is the historic epic for a new generation.

"Emmy®" is the trademark property of ATAS/NATAS.

Ben Hur has a run time of approximately 184 minutes and is rated 15.