Rodriguez title Shorts out on DVD and Blu-ray this December 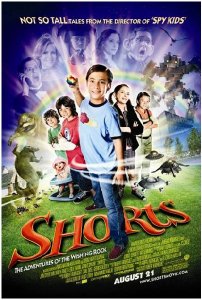 
***ARTWORK SUBJECT TO CHANGE***
THE ADVENTURES OF WISHING ROCK
Out on Blu-ray, DVD, On Demand and Digital Download on
7 December 2009

"It's fast and funny and the special effects, which produce a giant robot, marching crocodiles, mini UFO's and a pterodactyl, really are special.  It's weird, wild and well worth watching."  Daily Star

If you're scratching your heads trying to think of exciting, fun things to put in the kids' Christmas stockings, then think no more.  The answer is Shorts - the must-have, fun film of the festive season!

Directed by 'Spy Kids' trilogy director Robert Rodriguez, Shorts is out to buy on Blu-ray, DVD, on demand and digital download on 7 December 2009 courtesy of Warner Home Video.   Energetic and inventive, Shorts tells its story in tantalising bite size pieces - like a series of shorts.  Constructed like a jigsaw, we follow the trail of a rainbow coloured wishing stone as it impacts on the small community of Black Falls.  Slipping through the hands of many of its residents, the result is a wonderfully imaginative mix of hilarious mayhem as wishes are realised and, in turn, the characters understand the need to beware of what they wish for.
Featuring a top notch cast that includes James Spader (Alien Hunter), Jon Cryer (Two and a Half Men - TV), Jimmy Bennett (Star Trek, Orphan), Leo Howard (G.I. Joe:  The Rise of the Cobra), Devon Gearhart (Changeling) and Leslie Mann (Funny People, 17 Again, Knocked Up), Shorts is the perfect stocking filler this Christmas!

Official Synopsis
Shorts is set in the suburb of Black Falls, where all the houses look the same and everyone works for BLACK BOX Unlimited Worldwide Industries Incorporated, whose Mr. Black's BLACK BOX is the ultimate communication and do-it-all gadget that's sweeping the nation.  Other than keeping his parents employed, however, Mr. Black's BLACK BOX has done nothing for 11-year-old Toe Thompson, who just wants to make a few friends…until a mysterious rainbow-coloured rock falls from the sky, hits him in the head and changes everything.  The Rainbow Rock does Mr. Black's BLACK BOX one better:  it grants wishes to anyone who holds it. Before long, wishes-gone-wrong have left the neighbourhood swarming with tiny spaceships, crocodile armies, giant boogers…and outrageous magical mayhem around every corner.  But it's not until the grown-ups get their hands on the Rock that the trouble really starts.  Now Toe and his newfound friends must join forces to save their town from itself, discovering along the way that what you wish for is not always what you want.