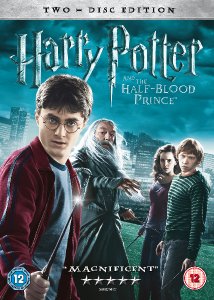 To celebrate the eagerly anticipated release of Harry Potter and the Half-Blood PrinceTM on Blu-ray and DVD, HMV and Warner Home Video have teamed up to deliver a simply amazing pre-Christmas treat to the series' dedicated fans, one that they're extremely unlikely to forget in a hurry!

On 6th December between 4pm and 6pm, fans* will come face-to-face with some of the heroes - and villains - from blockbuster Harry Potter and the Half-Blood PrinceTM as they make a very special personal appearance at HMV, 150 Oxford Street, London.

Out on Blu-ray and DVD on 7 December 2009 from Warner Home Video, the entire ensemble cast is back for the sixth installment of the record-breaking franchise based on the best-selling book series by J.K. Rowling.

The Blu-ray disc of Harry Potter and the Half-Blood Prince™ will feature Warner Bros. Maximum Movie Mode, an interactive viewing experience that examines the entire film with such features as Focus Points, Picture-in-Picture, photo galleries and more.
Harry Potter and the Half-Blood Prince™ will be also available as a 2-disc DVD. Harry Potter™ box sets on both Blu-ray and DVD and featuring all six films released in the franchise to date will also be released on 7 December 2009.

Due to limited time available access to the queue will be strictly limited. Wristbands will be issued from 10am on the day of the event from the store on a first come first served basis, no reservations, one wristband per person only.