Title was released day-and-date on DVD, Blu-ray, EST (Electronic Sell-Through) and VOD (Video on Demand) in the U.K. and Ireland


London, 9th December 2009: Harry Potter and the Half-Blood Prince™ has cast its spell over the UK once again with record-breaking first day sales to make it the fastest-selling DVD and Blu-ray release of 2009.

An incredible 840,000 units were sold on its first day, 53,000 of which were Blu-ray, in turn delivering the high definition format's biggest first day ever for a family entertainment release. In addition, the movie, which was released day and date on DVD, Blu-ray, electronic sell-through (EST) and video-on demand (VOD), is currently the number 1 selling movie download on iTunes.

John Stanley, Managing Director, Warner Home Video U.K. today commented, "We're delighted by the extraordinary first day sales performance of Harry Potter and the Half-Blood Prince. By making the biggest movie of the year available on the same day across DVD, Blu-ray, EST and VOD, we are satisfying the needs of today's consumers and ensuring they see what they want, how, where and when they want it."

Supporting the DVD and Blu-ray releases, special personal appearances from cast members of Harry Potter and the Half-Blood Prince™ took place at HMV in Oxford Street where they signed copies of the Blu-ray edition of the film and were greeted by huge crowds. UK Fans who bought the Blu-ray edition will also be able to take part in the first ever worldwide* Live Community Screening (LCS). Taking place on December 12th, the LCS will allow BD-Live capable Blu-ray users to simultaneously watch the movie together with Daniel Radcliffe and director David Yates while putting questions to them directly from their home. 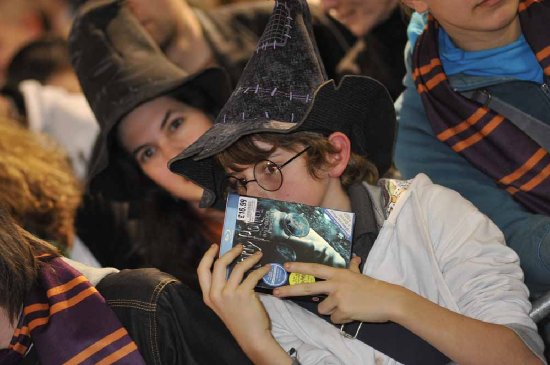 In Harry Potter and the Half-Blood Prince™, Voldemort tightens his grip on Hogwarts as Harry and Dumbledore work to find the key to unlock the Dark Lord's defenses.  But the students are under attack from a very different adversaryteenage hormones.  Love is in the air, but tragedy lies ahead and Hogwarts may never be the same again.

Todd Philips' hit comedy The Hangover was also released yesterday day-and-date on DVD, Blu-ray, EST and VOD by Warner Home Video and has become the biggest comedy of the year with total day 1 sales in the UK of 138K.