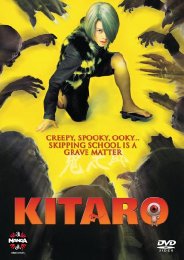 Synopsis:
Based on the hugely popular Japanese comic, 'GeGeGe no Kitaro', Kitaro is a live-action adaptation of the manga series created in 1959 by manga artist Shigeru Mizuki. It is best known for its popularization of the folklore creatures known as y'kai, a class of spirit-monster to which all of the main characters belong. It has been adapted for the screen several times, as anime, live-action, and video games. A new anime series has been made every decade since 1968.

Kitaro (Eiji Wentz) is a yokai whose parents both died before he was born. Actually, to be more accurate he crawled out of his mother's dead-and-buried corpse and emerged from her grave. In order to protect Kitaro, his father gathered up what little life essence he had left and emerged as a single walking, talking eyeball called Medama Oyaji. Kitaro lives in a secluded tree house with other yokai, trying to remain as unseen to human eyes as possible. However, one day Kitaro receives a letter from a little boy named Kenta Miura (Ruka Uchida) begging for his help to get rid of the ghosts haunting his apartment complex. Kitaro decides to investigate the situation, and sure enough he finds a group of mischievous yokai tormenting the residents of the complex, working under the orders of Nezumi Otoko (literally 'Rat Man'). Rat Man is a shifty, selfish yokai who's always looking for a way to make a quick buck, so when a land developer offered him cash to force people out of the apartment complex he jumps at the chance.