Series 3 of Skins arrives in April 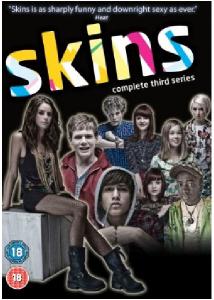 "The best British teen drama for years" Guardian
"This is TV at its best… feisty, polarising and compelling" The Times
"Funny, pacy and authentic" Daily Mirror

The critically-acclaimed hit comedy drama series Skins returns for a third series with an exciting new cast of teen misfits available to own on DVD from Monday 6th April 2009, with the Series 1-3 Box Set released on the same date by 4DVD.

Both DVD and boxset are packed with exclusive extras including ancillary storylines, behind-the-scenes featurettes for each episode, video diaries and much more. Led by original cast member and new queen bee EFFY, expect another rollercoaster take on each of the group's experiences of teen life mixed with the madness of the adults surrounding them.

The Class of 2009 is headed up by the beautiful and mysterious EFFY (Kaya Scodelario), returning as the new queen bee; enigmatic and elusive as ever, her best friend PANDORA (Lisa Backwell) is sweet and kooky with a taste for naughtiness and keeps the new gang together.

Twins KATIE (Megan Prescott) and EMILY (Kathryn Prescott) are pulling in different directions. One wants to shed her identity as a twin and gain social status while the other hangs on, crippled by shyness. NAOMI, (Lily Loveless) a beautiful idealist who is passionate, political and principled completes the girls.

The guys are led by the irrepressible and irresponsible COOK (Jack O'Connell - This is England, Eden Lake), the daring and charismatic leader of the gang. His best mates sometimes despair, sometimes struggle to keep up, but are always there for him when he needs them. FREDDIE (Luke Pasqualino) is into skateboards, smoking weed and loves his mates. JJ aka Jonah Jeremiah Jones (Ollie Barbieri), is a master illusionist and also their strategist - together they get in, and just about out of numerous scrapes in their scheme to succeed.

Finally there's THOMAS (Merveille Lukeba) who has travelled from the Congo to set up home for his family, and has to find his feet in strange new surroundings. Together the gang bond as they fall in and out of love and lust, fight one another, compete against each another but eventually unite as one.

Made by Company Pictures and Storm Dog Films for E4 the ten new episodes are written by a young British writing team headed up by Executive Producer Bryan Elsley, produced by Chris Clough and directed by Charles Martin and Simon Massey.

Skins - Series 3 is currently airing on E4 while the DVD and boxset are released on DVD on Monday 6th April 2009 from 4DVD.