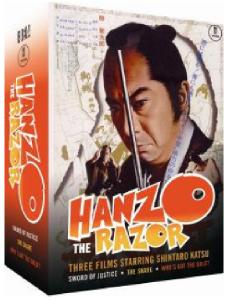 Love samurai films? Wish they were... dirtier? Welcome to HANZO THE RAZOR's deranged world of crazy swordplay and sexploitation set to a 1970s funk soundtrack. This cult 1970s Japanese pinku trilogy was seemingly influenced by Dirty Harry and Shaft, but there's no doubt who has the 'longer arm of the law'!

Shintarô Katsu (best known as the blind swordsman in the original Zatôichi) stars as Hanzo - a rebellious yet obsessively moral samurai police officer who slashes his way through the backbone of crime, uncovers corruption at higher levels, and tortures relentlessly using his own unique techniques. Shocking audiences even today, the hardest man in Edo regularly unleashes his special weapon in the form of his oversized penis, which he uses to 'interrogate' female suspects into pleasured compliance. Despite the knuckle-biting, graphic violence there is an underlying social commentary, testifying to the noble honour of the samurai and emphasising Hanzo's status as the people's champion.

In Sword of Justice, Hanzo overturns his own gutless superiors; in The Snare, he breaks into a temple used by local magistrates for the sadistic torture of young girls; in Who's Got the Gold?, the shogunate treasury is being looted by its own officials.

From the creator of the Lone Wolf and Cub series (used as the basis for Shogun Assassin, and a direct influence on Tarantino's Kill Bill) the Hanzo the Razor trilogy is presented here complete and uncut.