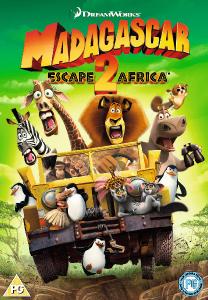 Buckle up for a rockin' ride with Alex, Marty, Melman, Gloria and the rest of the gang in the hilarious adventure from DreamWorks Animation SKG, Inc's that's even better than the first, when MADAGASCAR: ESCAPE 2 AFRICA comes in for landing on Blu-ray & DVD on April 6 2009. With twice the laughs, twice the fun and twice the Penguins, this smash hit release is sure to be the talk of the watering hole.

The four zany zoo denizens of the original blockbuster comedy prepare to head home to Manhattan in a rickety aircraft piloted by the ever-inventive penguin cadre. But when they crash land in the African savannah, it's time for a crash course in survival. The four friends far from home must answer a question of the heart when Alex finds his long lost parents, Marty joins a herd of his wild brethren, Gloria finds romance with a hippo Casanova who appreciates her curves and Melman has one last chance with his truest desire. With King Julien's manic musical antics, the funniest pack of penguins ever and a pair of primates with opposable thumbs, MADAGASCAR: ESCAPE 2 AFRICA is great fun for all the family.

DreamWorks Animation's MADAGASCAR: ESCAPE 2 AFRICA Synopsis All of the loveable characters are back; Alex the lion, Marty the zebra, Melman the giraffe and Gloria the hippo, King Julien, Maurice and the penguins in MADAGASCAR: ESCAPE 2 AFRICA.They find themselves in the wildest place of all, the vast plains of Africa, where our zoo-raised crew encounter species of their own kind for the very first time. While discovering their roots, they quickly find the differences between the concrete jungle and the heart of Africa. Despite long-lost relatives, romantic rivals and scheming hunters, Africa seems like a great place...but is it better than their Central Park home?