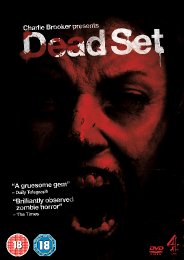 Synopsis:
From Nathan Barley co-creator and Guardian writer Charlie Brooker comes the outrageous new thriller Dead Set, E4's first-ever horror series, released exclusively by 4DVD on 19th October 2009.
Starring Jaime Winstone (Donkey Punch, Kidulthood) Dead Set is a chilling new horror series in which the dead are returning to life and attacking the living. Curiously there are a few people left in Britain who aren't worried about any of this - that's because they're the remaining contestants in Big Brother. Cocooned in the safety of the Big Brother house, they're blissfully unaware of the horrific events unfolding in the outside world. Until an eviction night when all hell breaks loose…
Kelly (Winstone), a production runner working on a fictional series of Big Brother, finds herself trying to fend off the walking dead alongside her producer boss Patrick (Andy Nyman, Severance), boyfriend Riq (Riz Ahmed, Britz) and the remaining Big Brother housemates.
Over the ensuing days, in a cruel reflection of the game show they thought they were entering, the contestants fall victim one by one to the hungry masses outside. Staying alive requires crucial teamwork - which can be tricky when you're a group specifically selected by TV producers to wind each other up.

Featuring a range of cameo appearances from Davina McCall and several former Big Brother housemates, the series was broadcasted on E4.

Special Features:
• Davina McKill
• SFX: You've Got To Get Them In The Head
• Interview with Yann Demange
• On Set with Dead Set
• Interview with Charlie Brooker
• SFX: Head Shots
• Waste Not Want Not
• I Am Patrick, Hear Me Roar
• Army of the Dead
• SFX: Patrick gives Head