Get Smart - Saving the World with Steve Carell 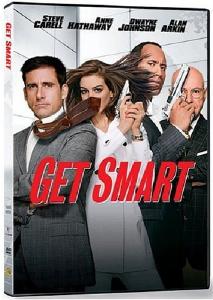 SAVING THE WORLD... AND LOVING IT!

If you thought Bond was the ultimate secret agent, think again. Meet Maxwell Smart, aka Agent 86, whose mission is to take Control of KAOS and save the world.

Set for DVD release on 23 February 2009 courtesy of Warner Home Video, Get Smart isn't your average spy spoof story. It's a laugh out loud extravaganza of top notch special-effects sequences, thrilling stunt work and a wonderfully imaginative array of gadgets that would be the envy of any self-respecting spy. Check out the hilarious shoe phone, Swiss Army knife complete with flamethrower, blowgun and miniature titanium-threaded grappling hook, explosive dental floss and the 'cone of silence' to name a few.

As the infectious, super-intelligent, somewhat clumsy but ultimately pretty competent Smart, Carell is perfectly cast, allowing him to showcase his verbal wit and physical dexterity. His confident low-key style is complimented to perfection by the confident, consummate professional Agent 99 (Hathaway). With the calm and cool Chief (Arkin), the super-cool Agent 23 (Johnson), the menacing villain Seigfried (Stamp) and the inept Shtarker (Davitian) lending their priceless support, the only burning question left to tackle is - will Max Get Smart and take CONTROL of KAOS?

Maxwell Smart is an ever-eager research analyst at the headquarters of Control, a government security agency believed to have long been disbanded but remaining covertly active.

Super intelligent but incredibly clumsy, Smart has always dreamt of one day leaving his desk bound job and working in the field alongside stalwart superstar Agent 23. However, having passed all the necessary field exams he still fails to make the cut and under the orders of his Chief, Max's ambitions look a distant dream.

However, when Control is unexpectedly attacked, the identities of its secret agents are compromised and soon active field agents are being assassinated. Left with a depleted security force and few options the Chief has no choice but to designate Smart Agent 86. He partners him with the far more competent, lovely-but-lethal veteran sidekick Agent 99, assigned to show him the ropes.
They quickly discover that their enemy, responsible for the attack on HQ is the evil crime syndicate KAOS. Their leader is Control's arch-nemesis Siegfried. Accompanied by Shtarker they have been gathering nuclear weapons with the intention of selling them on the black market to unstable dictators who will wage war across the globe.

Given very little training and some spy-tech gadgets to help him do his job, Smart and Agent 99 are sent to put a stop to KAOS's plans but Max's lack of experience leads to a string of hilarious scenarios. They get closer to unravelling the evil master plan but KAOS remain one step ahead at every stage. Smelling a rat they soon discover that KAOS has an informer within Control. It's a race against the clock to stop them from fulfilling their doomsday plans.

BD
· All of the above! +
· The Old I-Hid-It-In-The-Movie Trick (Feature on hidden 'Get Smart' TV show references)
· The Right Agent For the Right Job (Steve & Anne Screen Tests)
· Max in Moscow! (Comic piece)
· The Vomit Reel
· Bruce & Lloyd Sizzle Reel