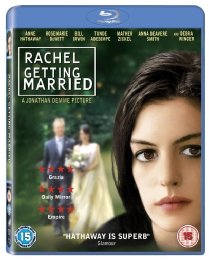 Rachel Getting Married in late June 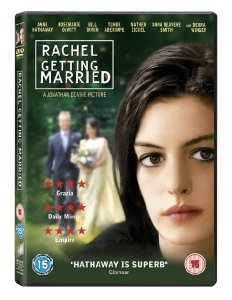 The Rachel Getting Married bonus features include deleted scenes, filmmaker and cast audio commentaries and featurettes and will be available on DVD for £19.99 RRP and on Blu-ray High-Def version will sell for £24.99 RRP.

Synopsis:
When Kym (Anne Hathaway - Academy Award and Golden Globe Nominee, Best Actress), returns to the Buchman family home for the wedding of her sister Rachel (Rosemarie DeWitt), she brings a long history of personal crises, family conflict and tragedy along with her. The wedding couple's abundant party of friends and relatives has gathered for a joyful weekend of feasting, music and love, but Kym - with her biting one-liners and flair for bombshell drama - is a catalyst for long-simmering tensions in the family dynamic. Filled with the rich and eclectic characters that remain a hallmark of Jonathan Demme's films, Rachel Getting Married paints a heartfelt, perceptive and sometimes hilarious family portrait.

The Blu-ray Disc™ version of Rachel Getting Married is BD-Live™ enabled, allowing users to get connected and go beyond the disc via an Internet-connected Blu-ray player. Download content and give feedback through an exclusive survey.