DVD
Planet Of The Apes: Special Edition (US)
Related Articles

Alice in Wonderland hits Blu-ray and DVD in June 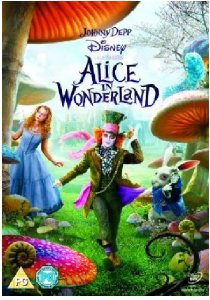 You've Got A Very Important Date

Audiences are invited to delve deeper into the rabbit hole to experience the magical and imaginative twist on one of the world's most beloved stories of all time in pristine high definition. A host of bonus features explore the whimsical world created by visionary directory Tim Burton (Charlie and the Chocolate Factory, Sweeney Todd) including a look inside the world of the Mad Hatter and Johnny Depp's transformation and the visual effects of growing and shrinking Alice, costume designs, music stunts and much, much more.

Mia Wasikowska stars as 19 year-old Alice, who returns to the curious world she first encountered as a young girl, reuniting her with long forgotten childhood friends; the White Rabbit (Michael Sheen), Tweedledee and Tweedledum (Matt Lucas), the Dormouse (Barbara Windsor), the Blue Caterpillar (Alan Rickman), the March Hare (Paul Whitehouse), the Cheshire Cat (Stephen Fry) and of course, the illustrious Mad Hatter (Johnny Depp). Completing the cast of charismatic characters is the reigning Red Queen is outrageously and deftly delivered by Helena Bonham Carter, whilst her adversary The White Queen is uniquely portrayed by Anne Hathaway.

Tumble down the rabbit hole with Alice for a fantastical new adventure from Walt Disney Pictures and Tim Burton. Inviting and magical, ALICE IN WONDERLAND is an imaginative new twist on some of the most beloved stories of all time. Alice (Mia Wasikowska), now 19 years old, returns to the whimsical world she first entered as a child and embarks on a journey to discover her true destiny. Wonderland is a world beyond your imagination and unlike anything you've seen before. The extraordinary characters you've loved come to life richer and more colorful than ever. There's the Mad Hatter (Johnny Depp), the White Queen (Anne Hathaway), the Red Queen (Helena Bonham Carter), the White Rabbit (Michael Sheen) and more. A triumphant cinematic experience - ALICE IN WONDERLAND is an incredible feast for your eyes, ears and heart that will captivate audiences of all sizes.


FOR IMMEDIATE RELEASE Notes to Editor:

To provide consumers with unprecedented quality, value and portability of their favorite Disney classics, in 2008 WDSHE pioneered the Double Play Pack - a Blu-ray Disc plus a DVD and in the cases of Triple Play pack, a Digital Copy of the movie in a single package. Current 2010 Disney titles available as Double Play include Up, Toy Story, Toy Story 2 and later in the year Princess and the Frog.