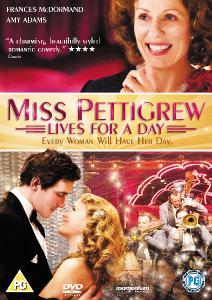 "A perfect movie for mum." The Sun
"A charming 1930's Cinderella meets Sex and the City only faster, funnier and male-friendly."**** Empire
"Sparkling, stylish and very, very funny... dripping with old-school glamour... a feel-good delight..."
News of the World
"A charming, beautifully styled romantic comedy." **** Grazia

How much can anyone's life change for the better over the course of 24 hours? Two women are about to find out in the truly delightful Miss Pettigrew Lives for a Day, an inspiring Cinderella story for grown-ups. Featuring a sumptuous soundtrack that includes such classics as Brother Can You Spare A Dime, Anything Goes, If I Didn't Care, Dream and It Ain't What You Do (It's the Way That You Do It), this film is sure to make your day.

When dowdy middle-aged governess Guinevere Pettigrew loses her latest job, her luck appears to have run out. Desperate for employment, she shows up at the plush flat of Delysia Lafosse, a glamorous nightclub singer whose desire for celebrity is only eclipsed by her interest in men. Delysia immediately calls on her new "social secretary" to help her juggle her numerous suitors. Finding herself catapulted into the dizzying social whirl of London's high society, every dream that Pettigrew had given up on becomes a reality for 24 hours.