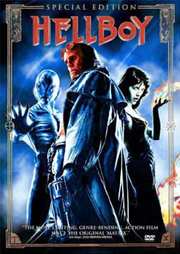 Synopsis:
When a Nazi mystical experiment goes awry in 1944, the target of a wizard`s spell, the child of Satan, Hellboy, is wrenched from his home, and adopted by the U.S. agents who intercept his arrival.

Raised as a force of good, Hellboy grows up to be a full-fledged demon in the form of a man, complete with fierce red skin, a tail, a giant stone hand, and two large circles where his horns should be (if they ever grow back, Hellboy is quick to file them down). Now, the adult Hellboy, an investigator of the paranormal, is sent on a mission that brings him back in touch with the evil genius that started it all...

Accompanying him along the way are other agents, including Liz, a pyrokinetic woman Hellboy has feelings for, and Abe Sapien, a mysterious amphibian hominid...