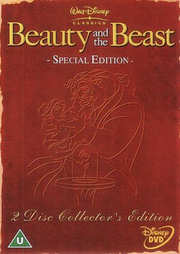 Synopsis:
A modern movie masterpiece, Beauty And The Beast waltzed away with two Academy Awards and earned six Oscar nominations including Best Picture - the first ever for an animated film! Restored and remastered for sparkling-new sights and sounds, this unforgettable tale of book-loving Belle and the Beast she teaches to love - will charm and enchant you like never before. And now, in this groundbreaking Special Edition DVD you`ll enter the Beast`s castle and explore its many secrets - with three versions of the film, movie tricks of the trade, exciting games and more! Join your favourite characters: lovable Lumiere, punctual Cogsworth, and the curious cup and his teapot mother, Chip and Mrs. Potts, for enchanting fun you`ll enjoy over and over again!

Disc Two:
Making of
The Story Behind The Story
Music video

If it isn't Baroque, don't fix it.

Once upon a time there was a handsome Prince who was turned into a hideous Beast by an Enchantress who saw that there was no love or compassion in the Prince. In the nearby town lived a beautiful young woman, Belle. One night, her father became lost in the woods and is made a prisoner of The Beast. Belle set forth to search for her father and found him imprisoned in The Beast's castle. For the love of her father, she agrees to become The Beast's prisoner in return for her father being freed. The uncaring and unloving Beast agreed, and Belle became the Beast's prisoner. Will she be set free, and will The Beast break the spell? Only love will tell.

The joy of this film is that is was written as a musical - the songs form part of the story - its not a story with added songs - a problem that Disney were having, and to a degree are still having, in their animated features. And with a voice cast that knew what they were doing (Paige O'Hara, Robby Benson, Richard White, Angela Lansbury, Jerry Orbach, David Ogden Stiers, Rex Everhart & Jesse Corti) they are able to bring the pictures to life.

One of my favourite Disney films has now been released on DVD. "Beauty and the Beast" is a special edition two-disc set, but is also, Disney claim, an "experiential" DVD set. Included is the original theatrical version of the film, the Work-In-Progress version shown at the 1991 New York Film Festival and the new Special Edition of the film that was originally prepared for IMAX and other Large Format presentations. The Special Edition version features the newly completed "Human Again" musical sequence that was not included in the original release. Why did they cut it from the original release? Basically, because it adds nothing to the story apart from letting the minor characters sing a song about their desire to be... Human again!

The enhanced 1.85:1 DVD exhibits sharp, detailed images for the theatrical and special editions in nearly flawless picture quality. The Work-in-Progress has various marks and scratches but these are on the unfinished picture, not on the print. All three versions of the picture were sharp and detailed. Colours are rich and vibrant, with full saturation and deep blacks.

Disney DVD brings us "Beauty and the Beast" remastered in Dolby Digital 5.1, and boasts a full-bodied crisp soundtrack and as cartoons have all their sound added in post-production the 5.1 tracking sounds as if it was meant to be like that all along.

There are differences in extras from R1 to R2 - but not enough to make me want to buy the US edition, after all if it is a choice between a PAL or NTSC picture the PAL picture wins every time.
The main extra on disc one is the commentary from directors Gary Trousdale and Kirk Wise and producer Don Hahn with comments from composer Alan Menken. This commentary is linked to the special edition version of the film. The commentary is not too technical so should appeal to most viewers. (If you want to know about the moving bear-skin rug you will have to listen).
Also on disc one is a sing-along track that brings up the subtitles when the songs start (no little bouncy ball thought) and there is an interactive game.

Disc two is obviously where the main "extras" are. There are three main sections 'Cogsworth & Lumiere' (with all the main featurette), 'Mrs Potts' and 'Chip'.

The various features do the usual job of telling about the production - how difficult it was, how they were pushed for time (it only took 2 years to make - which is quite short for an animated film), how lucky they were to get such fantastic voice talent, how very, very fantastic Howard Ashman was. In fact all the usual stuff you expect from - every company not just - Disney. It sometimes makes me wonder how 'Variety' and 'Hollywood Reporter' manage to fill their pages every week with all film people loving every one so very, very much.

The most hyped part of this DVD is the new song 'Human Again' - and the revision of the second half of the film after its inclusion. I think that the song comes into the 'All Right' category, and it is obvious why it was cut the first time around. Films are not stage shows - so what works in a theatre with a live audience does not always work on the screen, be it on the big screen in the cinema, the really big screen in IMAX, or my 32 inch TV. During one of the features Jeffery Katzenberg (a first for Disney - he is actually mentioned by name - with a photograph) is quoted as asking Howard Ashman if he could write more verses to the song 'Beauty and the Beast' and Howard answers that the song is fine as it is. It's a pity the directors of the film did not take the late Mr. Ashman's advice. As Cogsworth says during the film

And just when I have been saying that Disney have finally got the navigation of their DVD's correct, along come the game "The West Wing" - you need a code given after completing the interactive game on the first disc (Star Moon Cloud) - but my DV88 refused to let me do anything in the game so I have no idea what the 'surprise' was at the end of the game. In my case hearing that someone has managed to start the game would be a surprise.

The other point of contention is Disney's idea of special edition or "experiential". If you have the Original Video release Box Set Special Edition you have : The Film on one tape, The Work-in-Progress plus an excellent making of (which is not included here) on another tape, a CD of the soundtrack a lithograph from the film and a very interesting book covering the making of the film. To compare this 2 disc set with 'Snow White' is very misleading - the Snow White extra disc tells more, plus there is a good booklet.

However, having complained about the presentation, I have to say that Disney's "Beauty And The Beast" is a wonderful film and frankly has a special place in my collection and I would recommend it to anyone who likes family films.
posted by Tony Myhill on 27/11/2002 11:56
8 / 10

This is a Good Disney Film but i think the 60 and 70 Disney are 10 times better with the expectation of Toy Story 1, Toy Story 2 and Monsters Inc.

3 different versions is a little much but it is good how they made some changes.