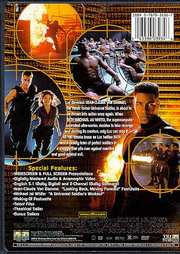 Back Cover of Universal Soldier: The Return
Related Items

DVD
I Still Know What You Did Last Summer (US)

DVD
Not Another Teen Movie (US)

DVD
Seventh Voyage of Sinbad, The (US)

Universal Soldier: The Return (US) 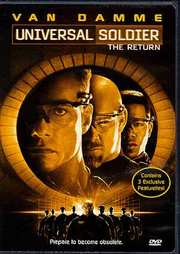 Synopsis:
Luc Deveraux (Jean-Claude Van Damme), the heroic former Universal Soldier, is about to be thrown into action once again.

When Seth (Michael Jai White), the supercomputer controlled ultra-warrior, decides to take revenge and destroy its creators, only Luc can stop it. All hell breaks loose as Luc battles Seth and a deadly team of perfect soldiers in a struggle that pits man against machine and good against evil.

Director of Photography:
Michael A. Benson

INTRODUCTION
Well, what can I say? For those who are lucky enough not to have seen this, keep it that way. This film is bad. To be honest, bad is putting it mildley. Unisol The Return is basically an 80 minute documentary on guns, explosions, diabolical story and very very bad acting. The idea of an official sequel to the original at first sounded a good idea, but having heard the horrific reviews from the States (where, miraculously, it was released theatrically), my mind soon began to change.
What we have here is a cynical, manipulative film with no sense of direction whatsoever. The story - Luc Deveraux has now been converted back into a human. Natrually. Having risked his second life running away from his bosses in the first film, he goes into hiding, right? Wrong. He goes back to the `secret` company as a technical adviser which is now as public as McDonalds. A super computer that controls the `new breed` of Unisols called SETH goes mental when it discovers that funding for the Universal Soldier programme will be cut. SETH`s memory is then downloaded into a microchip which is subsequently placed in Michael Jai Whites head (unneccessary gore). He orders his soldiers (who look like porn stars or something, they act so bad) to `act without emotion` in a mind-numbing speech that appears more comical than anything else.
The following scenes are non stop action sequences which are so badly choreographed you have to laugh. Van Damme, by the way, is the only dude on the Unisol project who knows a code to keep SETH alive (he`ll die in 24 hours without it), so cue a feature length chase through a crappy soundstage with polystyrene walls. Wrestler Bill Goldberg is the main guy on Van Dammes back and goes out of his way to kill him, giving us cheesy smiles while yelling `Women - expendable!`. But wait a minute? Shouldn`t Deveraux be kept alive so that he can give out the code? Oh well, just another minor plot glitch.
Before I drive myself into a deep state of depression recollecting the events of the film, I must add finally that the only building within a five mile radius with a power supply is a stripclub. Obviously. Cue even more fighting, this time against bouncers.
So, as you have probably gathered, this film is pretty damn awful. Bearing no resemblance to the original at all, it`s a mish mash of bad stunts, terrible acting and pathetic storylining. Avoid like the plague.
VIDEO
Sadly, this movie is delivered to us with crisp visuals and shows few artifacts, making it even more painful to watch.
SOUND
Quite good actually. A 5.1 mix enhancing the many cheap gunshots, explosions and deep voices ensures that your sound system will get a real hammering. The high point of the disc.
Oh, and may I just point out the absolutely diabolical soundtrack - gone is the half decent score of the first film only to be replaced by the most innappropriate rock music, remeniscent of wrestling tunes (Hang on, there`s a wrestler in it, isn`t there?).
EXTRAS
A dog poo of a film gets better treatment than it deserves, but you won`t really care. What we get are three annoying little `featurettes` that cover Van Dammes career, the Making of the movie and finally, a Michael Jai White workout video. Only it isn`t really a workout video at all, it`s a five minute glamorized interview with the fella. To add, we are given the luxury of talent files for all the talented people involved with the project and, of course, the theatrical trailer. That actually isn`t so bad, better than the main feature anyway.
All are presented in a beautiful static menu.
Only kidding. All are presented in a dull static menu.
OVERALL
We in the UK are the lucky ones as this was a straight to video release due to the film divebombing at the US box office. Therefore few people know of its existence, so lets keep it that way. I find it hard to believe that Columbia have released this on DVD as they should really be hanging their heads in shame for producing such utter tripe.
Oh well, the VHS version has been deleted in the UK already so hopefully the DVD will follow suit in America. Enough.
posted by Joe McEwan on 28/8/2001 04:32