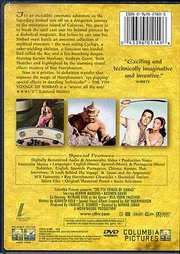 Back Cover of Seventh Voyage of Sinbad, The
Related Items

DVD
First Men In The Moon (US)

DVD
So I Married An Axe Murderer (US)

DVD
In the Line of Fire (US)

Seventh Voyage of Sinbad, The (US) 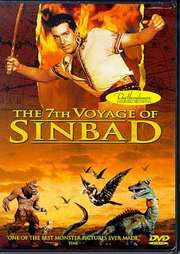 Synopsis:
It`s an incredible cinematic adventure as the legendary Sinbad sets off on a dangerous journey to the mysterious Island of Colossus. His quest is to break the spell cast over his beloved princess by a diabolical magician. But before he can save her, Sinbad must battle an awesome collections of Mythical monsters - the man-eating Cyclops, a saber-wielding skeleton, a ferocious two-headed bird called the Roc and a fire-breathing dragon.

I have always appreciated Ray Harryhausen`s work and his fantastic films have entertained me for years - in fact since, as a child, going to the cinema in the late 1950`s - seeing his name in the credits always meant there was something special to look forward to. Over the years I have re-watched films like "Jason And The Argonauts", "Clash Of The Titans" and the Sinbad series again and again knowing that in all these films Ray Harryhausen was in charge of bringing the fantastic and mythical creatures to life through his Dynamation/stop-motion animation techniques. Ever since I saw these films, the first thing that comes to my mind when thinking of Medusa, is his writhing version of the snake-woman. Whenever I think of a cyclops, I inevitably see the ones from "The 7th Voyage Of Sinbad". Therefore you can understand that I was looking forward to seeing how this particular film turned out on DVD in this release from Columbia Tri-Star Home Video.

On his way home to marry the Princess Parisa (Kathryn Grant), Sinbad (Kerwin Mathews), rescues the diabolical magician Sokurah (Torin Thatcher), but Sokurah loses his magic lamp. In Baghdad for the wedding Soukurah secretly casts a spell on Parisa that reduces her to the size of 5 inches. In agreeing to help restore Parisa, Soukurah has Sinbad take him back to the island of Colossa. There Sinbad and his men confront a frightening assortment of dangerous mythical monsters. Cyclops wander the island and Sokurah`s hidden castle is guarded by a fire-breathing dragon and armoured skeletons. Sinbad has to make his way through the island to obtain the final ingredient that can break the spell on the Princess, a piece of eggshell from a Roc, a ferocious two-headed bird. In the meanwhile Sokurah has made his preparations to rid himself of Sinbad and his crew. Only the genie of the lamp can help now - if only Sinbad and Parisa knew how to evoke it.

"The 7th Voyage Of Sinbad" is a classic tale taken from "1001 Arabian Nights". It is a colourful adventure that takes you to exotic and colourful Baghdad, combining the Arabian culture with black magic and ultimately the breathtaking mythical creatures that challenge Sinbad and his men. Considering the age of the film and the fact that this was Ray Harryhausen`s first use of his stop-motion techniques in a colour film, the effects are spectacular. With `Henri Jaffa as color consultant: Technicolor` the charm the film creates and the masterful presentation of the creatures is still a showstopper after more than 40 years. Harryhausen`s genius is evident in every frame that he painstakingly animated and arranged. Charles Schneer and Ray Harryhausen always managed to attract good directors to their films, a surprise really as they must have know that their live action direction would be superseded by Ray Harryhausen`s Dynamation. (Nathan Juran had already directed their `20 Million Miles to Earth`) Spectacular seanary and interesting camera angles and dramatic editing further enhance the effect that helps to bring life to the creatures when they appear.

Columbia Tri-Star Home Video is presenting "The 7th Voyage Of Sinbad" in 1.66:1 ratio. The transfer is enhanced for 16x9 televisions and shows a great level of detail. The transfer contains a bit of grain in certain scenes, which due to the technical limitations of the time, but other than that, "The 7th Voyage Of Sinbad" has never looked better. The film`s powerful colours are vividly reproduced, bringing out the best of the lavish production design and the film`s flamboyant and exotic costumes. The presentation on this release has an outstanding colour balance, ranging form the darkest shadows to the brightest highlights. It is evident that Columbia has put some effort and labour into this transfer, and it clearly shows. The compression on the disc is equally good, without any compression artefacts anywhere in the presentation. "The 7th Voyage Of Sinbad" contains monaural Dolby Digital soundtracks in English, German, Italian, Spanish and French. The English soundtrack has been digitally remastered for the occasion. The audio is surprisingly good and clear without hiss, or pops. Although the dynamic response of the track is still somewhat limited, due to the audio track`s general age, the noise floor is surprisingly low, which is evident especially in the passages carried by Bernard Herrman`s musical score. The DVD contains 21 subtitles, ranging from English, German, Spanish and French to Arabic, Finish and Icelandic.
The disc also contains a number of special features, all of which focus on Ray Harryhausen`s work and are extremely interesting and insightful. Two interviews with Harryhausen take you behind the scenes of "The 7th Voyage Of Sinbad" and "Jason And The Argonauts", covering some technical challenges of these particular productions. You will also find a small featurette on the disc, called "This Is Dynamation". It is a three-and-a-half minute advert for stop-motion animation techniques from 1958, presented to advertise the then impending theatrical release of "The 7th Voyage Of Sinbad". The undisputed highlight of this DVD - apart from the film itself of course - is a one-hour documentary called the "Ray Harryhausen Chronicles". It is an extensive voyage through his work, from his early attempts in his parents` garage all the way to his last film "Clash Of The Titans". The major milestones in his career are covered and highlighted with stories and anecdotes, told by Ray Harryhausen himself or his friends, they have been nicely captured in this documentary that will give everyone the chance to see and understand the genius that hides behind these fierce monsters. To round up the spectacular presentations on this release, Columbia have included trailers from "Jason and the Argonauts" and "The Golden Voyage Of Sinbad".
"The 7th Voyage Of Sinbad" is a classic of a film - Nothing can replace Harryhausen`s unique style and the enigmatic charm of his films. They just don`t make films like these any more - replacing the individual signatures of people like Ray Harryhausen or Willis O`Brien with computer generated creatures that have no charm or soul.
If you are anything like me, a lover of these magnificent masterpieces then you will cherish this disc and give it a special place in your collection.
posted by Tony Myhill on 14/4/2002 18:34
8 / 10

The first of the famed Charles H. Schneer-produced Sinbad movies, The 7th Voyage of Sinbad brought the legendary sailor into combat with a variety of creatures, all brought to life by the stop-motion magic of special effects guru Ray Harryhausen.
In this 1958 screen adventure, Sinbad and his men sail to the island of Colossa and find trouble with a man-eating cyclops. Facing certain death, the crew is rescued by the bald Sokurah the Magician and his young genie Baronni. Sokurah returns with Sinbad and his men to Baghdad, but the evil magician wants to return to the magical island for further booty.
The movie was every young boy's adventure fantasy come true. Seafaring adventures, stunning stop-motion effects, and a stirring score from Bernard Herrmann combined for a major hit. In the days before video, the film came back as a reissue on a regular basis, proving the timeless charm of monsters, magic and rousing swordplay. Schneer and Harryhausen went on to further Sinbad adventures in the 1970`s.

Columbia TriStar`s DVD is a valuable special edition, with the film presented in its original 1.85:1 aspect ratio and the original mono as a Dolby Digital 1.0 soundtrack. The source print is showing some color fading but is still very attractive. The numerous supplements include the 60-minute documentary "The Harryhausen Chronicles" narrated by Leonard Nimoy; a conversation between Harryhausen and John Landis (Ray shows off his original fighting skeleton); a retrospective of Sinbad with Harryhausen collaborators; the short promo reel "This Is Dynamation"; cast notes; and a priceless gallery of trailers from several Harryhausen extravaganzas.
posted by Aslan on 22/8/2002 19:11