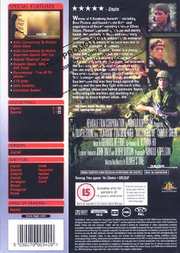 Back Cover of Platoon: Special Edition 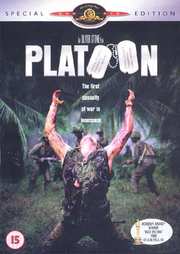 Synopsis:
Winner of four Academy Awards, including Best Picture, and based on the first-hand experience of Oscar-winning director Oliver Stone, Platoon is powerful, intense and starkly brutal.

Chris Taylor (Charlie Sheen) is a young, naive American who, upon his arrival in Vietnam, quickly discovers that he must do battle not only with the Viet Cong, but also with the gnawing fear, physical exhaustion and intense anger growing within him.

While his two commanding officers (Oscar-nominated Tom Berenger and Willem Dafoe) draw a fine line between the war they wage against the enemy and the one they fight with each other, the conflict, chaos and hatred permeate Taylor, suffocating his realities and numbing his feelings to man’s highest value... life.

brilliant film that tells a brutal yet inspiring story of a young recruit in vietnam. well acted throughout, notably willem dafoe, and well directed by oliver stone
worth best picture and presented excelently on dvd with 2 good informative commentaries and a well thought making of. buy it
posted by ad6 on 12/8/2001 22:18
9 / 10

Not surprised this film won four Academy Awards, Oliver Stone certainly earned his money on this one.

Never really been a big fan of Charlie Sheen but his performance here may have changed my opinion.

Overall `Crackin` film,excellent picture and sound quality, a disk with a few nice extras well worth a place in my DVD collection.
posted by rupertlongforth on 25/8/2001 01:19
10 / 10

platoon is one of the best war films to date(apart from apocolypse now) directer oliver stone makes you beleive
your there and has some cracking action sequences including
the last battle where barnes is killed also the pose dafoe dies
in sticks in your mind for a while,as for the extras the 53 minute documentry keeps you on your seat as well as the 2
fantastic commentrys.
posted by verhoeven on 18/11/2001 14:49
10 / 10

Platoon is in my opinion the best Vietnam War film to ever grace the big screen. This movie not only has a great director, but it also has a great plot and great actors.

Platoon is the story of a army private named Chris Taylor (Charlie Sheen) who drops out of college and signs up for the Vietnam War. Taylor soon finds that the war is nothing like he thought it would be and ends up on the front lines, combing the jungle for hostels. Taylor meets two people that he looks up to in his first few days in Vietnam: Sgt. Elias (Willem Defoe) and Sgt. Barnes (Tom Berenger.) Both Elias and Barnes are seasoned veterans who have been in Vietnam for 3 years. Taylor soon finds that Elias has lost faith in the war but still has faith in the common soldier, while Barnes is a man out for blood at any cost. Both Elias and Barnes face off in a battle of wills and in a battle for Taylor`s innocence. In the end, Taylor must face down his fear of death and come to grips with what he has become.

This film has some of the most realistic portrayals of Vietnam that I`ve ever seen. Nothing is sugar coated, and presents how horrible the conditions were. The cinematography in this film is astounding, and the battle scenes are nothing short of spectacular. The remastered audio made this movie come to life and feel like you right there with the soldiers. The acting in this movie is superb with excellent performances by Tom Berenger, Willem Dafoe, and even Charlie Sheen. The screenplay is excellent and has a moving climax that will keep you on the edge of your seat.

This is an excellent DVD with some of the best remastering work I`ve ever seen. If you like war movies, and have a Dolby Digital 5.1 home theater system, you won`t be disappointed with this awesome DVD. The best Vietnam War film to date!
posted by Aslan on 14/8/2002 03:59
8 / 10

There was a time when Oliver Stone meant good box office. Films such as "Platoon", "Wall Street" and "JFK" were huge hits and each bagged multiple Oscars. How the times have changed. Stone is now considered box office poison and a conspiracy nut.

"Platoon" is the Oscar-winning opening to Stone's "Vietnam Trilogy" (which also includes "Born on the Fourth of July" and "Heaven and Earth".

Video: "Platoon" is presented in its original 1.85:1 aspect ratio. For a low budget 1986 film the transfer is excellent. I've seen television broadcasts of this and the amount of defects/scratches begin to grate after a while. No such problem here. There are defects, scratches and dropouts but thankfully they are kept to as low a level as possible. I'm sure this is the cleanest MGM could get the print. Sharpness is variable but the film is viewable throughout.

Audio: "Platoon" is presented in a DD5.1 mix. Though if not for the labelling you'd be hard pushed to tell. The mix is front heavy with the surrounds only coming into play for helicopter flyovers, some gunfire and ambience. Bass is rarely used, even in heated battle scenes. One of the good points of the track, however is that it fills out the jungle effectively. A near constant stream of jungle sounds (insects, birds etc) come from the front stage and creates a great effect. Dialogue is nearly always clear with a few minor exceptions.

Extras: There are 2-Feature Length audio commentaries on the disc and both are uniformly excellent. The first one, by Stone not only informs you about the making and technical side of the movie, but he also delves into his experiences in Vietnam, which were the inspiration for the film. Stone is an intelligent talker with quite a dry-wit that rarely fails to raise a chuckle. The second commentary is from Captain Dale Dye. Stone and Dye went to great lengths to make the film realistic and listening to Dye's comments you get a firm telling of how realistic the film is. Both commentaries are excellent and well worth your listen.

The main video supplement is the 50-minute documentary, "A Tour of the Inferno" directed by Charlie Kiselyak. This is one of the best film documentaries I have ever seen. Culled from interviews with Oliver Stone, Dale Dye, Charlie Sheen, Tom Berenger, Willem Dafoe, Johnny Depp, and John C. McGinley, this is a tell all documentary with no fluffing. They all tell stories of how bad conditions were, how far Stone pushed them for realism etc. It also tells the story of how the film came about and its place in cinema and effect on Vietnam veterans.

Trailers and photo galleries round off the extras. A 8-page booklet is included in the case.

Overall: In the trailers, the narration calls "Platoon", "the first real film about Vietnam". And thinking about it, it probably is. "Apocalypse Now" and "The Deer Hunter" never went into Vietnam with the troops the way "Platoon" does. "Platoon" is a shocking and powerful account of a person's (played by Charlie Sheen, based on Stone's own experience) trip through Vietnam. The battles scene set a new standard for realism in 1986 and though "Saving Private Ryan" has since better it, they are still impressive. The performances are mostly great, especially the three leads; Sheen, Berenger and DaFoe.

Oliver Stone`s Platoon is a good war film with great performances by Tom Berenger, Willem Defoe and Charlie Sheen. The action is raw and brutal and the reality heightens it. With fantastic cinematography it is truly a great and enjoyable war film, but it ain`t no Apocalypse Now!

As any war film, Platoon has lot`s of fire fights an the 5.1 captures it perfectly.

Two Audio Commenatries one by Oscar winning Director Oliver Stone and one by Supervisor Dale Dye. The 51 minute making of `Tour of the inferno` is also good.
posted by the_film_king on 7/8/2003 18:30
8 / 10

Intro- Oliver Stone`s Platoon is possibly the most realistic war movie ever made without a doubt, need to say more and it`s one of Stone`s best works, ranking with JFK. The movie doesn`t need a plot as the scenes depicted in the movie is what Stone experienced when he was fighting in `Nam himself. The budget for Platoon is low at around $6 million but despite that, it`s bloody realistic. By the 1987 oscars, it scooped 4 awards including Best Picture.

Video- Slightly disappointing. I was expecting a really clean print like the Alien DVD(BTW, I expect ALL DVDs to be Alien like quality....it doesn`t require rocket science.) but unfortunately the beginning is full of flecks and it`s very distracting, IMO. It`s not all that bad as the video quality gets better as the movie goes on. Edge enhancement is kept to a minimum and sharpness is some-what questionable, it`s a little soft here and then in a few scenes. I`m sure this is MGM at their best. The movie is presented in 1.85:1 anamorphic widescreen.

Audio- The audio department is even more disappointing than the video. Although it has been remixed to 5.1 but the fronts are mostly used. Dialogue is near flawless throughout with only a few problems. Put up the volume and you get a war zone in your own living room. :)

George Delerue's score fits the mood of the movie. It`s a pity that it has been remixed to suit Ibiza lovers. Just leave it in its original state!!!

Extras- Even more disapponting than the video or audio departments. You get 2 audio commentaries, one from Stone and one from the Military Supervisor. Both are worth listening to.

The last supplement in this DVD is the "Tour of The Inferno" documentary. This 50 minute featurette is self explantory. It includes interviews from Director Oliver Stone, Military Supervisor Dale Dye and some of the cast. They discuss the horrible conditions in `Nam and Stone pushing the cast to the limits to achive realism and so on.

The extras are rounded off with galleries, tv spots and trailers.

There is an 8 page booklet that comes with the case. It features the usual chapter stops and includes very interesting insights to the film.

All these extras would get a 7 or 8 but I`m going to be controversial in this one. I`ll give it a 5 maximum because of the lack of extras. The 2 commentaries(directly ported from the Laserdisc version as quoted by directorscutIMDB) are nice additions but I want some more documentaries preferably covering aspects from Pre-production to post-production. Maybe I`m being spoiled too much by Lord of the Rings:EE or the Alien Quadrilogy, but it seems the DVD junkies want lots of extras nowadays.

The extras were good 3 years ago but now, it`s some-what average.

Overall- Platoon is possibly one of, if not, THE realistic war flick ever. The narrator in the trailer calls Platoon "The first real movie about Vietnam" It is. Platoon is a very brutal, powerful film especially in one scene where the soldiers treat many of the Vietnamese very harshly. The powerful images in this film will stick to your mind forever.