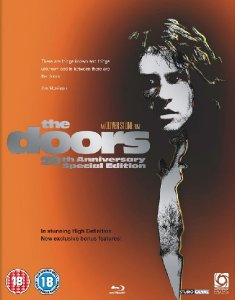 Music by The Doors

2011 is the 40th Anniversary of the death of legendary Doors front man Jim Morrison. With their legend intact and music as popular as ever, THE DOORS has been restored and is released here for the first time on blu-ray. Oliver Stone's epic portrayal of the hugely influential 1960's rock band and its charismatic, controversial lead singer and composer, Jim Morrison, features Val Kilmer in a career-defining role and also stars Meg Ryan, Kyle MacLachlan, Billy Idol and Michael Madsen. Featuring music from The Doors themselves and electrifying recreations of their most infamous on-stage performances, Stone captures perfectly the tumultuous, psychedelic journey of one of the late 60s' most exciting and influential bands.

The Doors were a distillation of their time. The music they made was raw yet poetic, angry yet seductive. The stage show at its best was dramatic, brilliant theatre - artistic expression transcending all form. Jim Morrison's sensual stage presence, charged with strength and energy, capable of projecting a sense of danger, spoke to young audiences' fantasies and became a catalyst for an era. Their songs have kept The Doors in that rare pantheon of groups whose music evokes the memory of the turbulent '60's and continues to make fans not only of those who lived during that time but also of following generations as well.

Extras:
· Jim Morrison, a poet in Paris
· Back to the roots