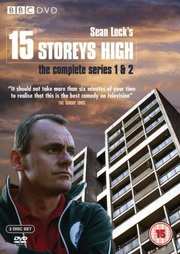 Synopsis:
Both series of the sitcom set in an impoverished tower block starring comedian Sean Lock.

Having started out as a Radio 4 programme, the show charts the life of Vince (Lock), a misanthropic loser living in a council flat.

Pool lifeguard Vince is desperately short on social graces - for example, he's fond of telling a good story he's heard and making out like it happened to him, oblivious to the fact everyone knows he's lying.

His roommate Errol (Benedict Wong), is of mixed Chinese ancestry, hailing from a large mixed-race family in the northern tradition - he's easy-going which is good, living with Vince, but he's also a bit gullible.

The lives of these two are mixed with scenes from those of the other people living in the tower block, a motley and miscellaneous bunch of deviants.