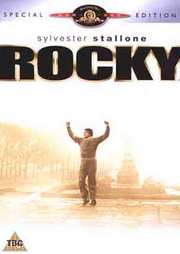 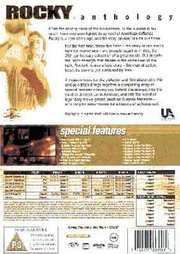 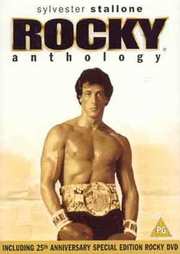 `Rocky` is the film that catapulted Sylvester Stallone into the international spotlight and launched one of the most successful series of films in movie history. `Rocky` won the 1976 Academy Award for Best Picture and two nominations for Stallone for leading actor and writer.

This is the story of a loser, a two bit boxer from Philadelphia, who gets a second chance in life by being offered an impossible shot at the heavyweight title. Stallone`s performance is as powerful as his character`s punches in the ring. This is one of the most exciting action movies you will ever see.

The Rocky DVD set is one of the best DVD sets out in the shops today. It has every Rocky Movie from 1 to 5 and the special features are fantastic on every DVD. The 1st movie has a lot of special features including an interview with Sylvester Stallone and it is great. The next 4 DVD`s have the trailer of every movie and scene selections and extra languages and all of that makes the DVD`s great and the set comes with a small booklet which has the name of each scene in every movie and a complete history of the Rocky movies and it says how Sylvester Stallone came up with the main characters and the story of the movies. This DVD set is fantastic and every Rocky fan will love it. It is more than worth buying.
posted by LFC_Lad on 1/7/2002 22:00
8 / 10

Rocky: Quite possibly the best underdog-against the odds-sports film ever made. People who call Sly a bad actor need only to look at this (and to a certain extent, First Blood and Copland). Sly is terrific here as the iconic Rocky Balboa, emitting the hope of a loser who wants to be a winner. Stallone's script is also excellent, concentrating on real characters and their relationships towards each other, rather than the boxing itself. Rocky is another 70's classic that belongs in every film fan's collection. Only the deeply cynical would dislike Rocky.

Note: I think the ending of Rocky is perfect. I feel there was no need to follow on the story. Unfortunately, the moneymen disagreed and so here they are. I review them only on their entertainment value.

Rocky II: The best of the sequels. It concentrates on the rematch of Rocky and Apollo. Everything (and I mean everything) is thrown in to get you rooting for Rocky again. The climatic fight scene is exhilarating.

Rocky III: Notably for the inclusion of Survivor's insanely catchy "Eye of the Tiger" and Mr. T. Here's where the series began to turn into the realms of farce. Still the end fight scene is as thrilling as ever, is a TAD unbelievable.

Rocky IV: How was this movie passed through International registrates? It's fairly frickin' obvious. 1986, American Vs. Russia. I don't know if this is just ribbing or plain bigotry. Still the end fight is adrenaline pumping, is a bit over blown and I'm getting a little bit tired of Adrian's negativity by now. And look at that crazy robot!

Rocky V: The real dud of the series, it not even entertaining on its own. Stallone brings Rocky back to his roots as a loser and defies the meaning of the ending of the first film completely. Even the fight scene is old hat.

Rocky VI: Yes, Stallone is making this. A 60-year-old Rocky? God help us.

Video: Overall all these transfer are pretty good. Due the age there are defects of course. Edge enhancements are minimal (hey I haven't seen these in abundance in quite a while. Are they now a thing of the DVD past?), however there is quite a bit of noise on the transfer, particularly in fight scenes, so I think it's the lighting of the scenes that effects this. I recently reviewed "Predator", a film released between Rocky IV and V, that transfer suffered from massive defects. None of these transfers contain defects as big as that, however the transfers aren't as sharp and blacks is off at times. Considering the films' age, considering the budgets, these are fine transfer.

Audio: Every film bar II and V are given 5.1 soundtracks. Sadly, it really doesn't matter, as none of them are particularly dynamic. In fact, the only bit of surround action in I is a train bypass. I'd say Rocky IV is the best as it has some nice ambience in the fight scenes. Overall these do the job, but they're not great.

Extras: Only Rocky is given any extras (the others have only a trailer), but it's a mighty fine special edition. Up first is the audio commentary. I am not a fan of cut together commentaries, but this is a fairly good commentary. Director Avildsen, the producer and most of the cast (no Stallone) are included. A nice mix of technical, anecdotes and characterisation, this is a commentary worth your listen. Stallone isn't on the commentary but he is given his own 30 minute on-screen interview. Stallone is an intelligent talker and talks about what inspired him to write Rocky, how he got it made and the significance of certain scenes. This is a much-watched extra here.

The 10 minute featurette is about fight choreography and make-up test. This is an interesting featurette and is presented by Avildsen. Also included are tributes to Burgess Meredith (Micky) and James Crabe (cinematographer and inventor of the Stedi-cam). Trailers and TV spots round off the extras. There is also an Easter egg. Hint; it's on the main menu. Included in the foldout case is a nice 12-page booklet.

Overall: Being a fan of the original Rocky, I bought this box set on sale for €39.99. Had it been for the RRP off €119.99, I would have just bought the special edition of Rocky. This is a nice set, though the extras on the sequels are severely lacking. The sequels (bar V) are mindless entertainment, but Rocky is the true classic. I'd shop around before buying.