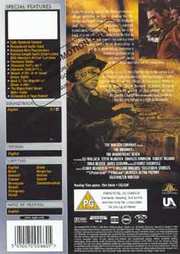 Back Cover of Magnificent Seven, The

DVD
Magnificent Seven, The (US)

Article
The Great Escape out on Blu-ray this June 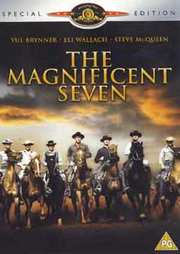 Merciless Calvera (Wallach) and his band of ruthless outlaws are terrorizing a poor Mexican village, and even the bravest lawmen can`t stop them. Desperate, the locals hire Chris Adams (Brynner) and six other gunfighters to defend them. With time running out before Calvera`s next raid, the heroic seven must prepare the villagers for this battle and help them find the courage to take back their town…or die trying!

I`m not really a massive lover of westerns, but this film rates along my favourite films. This film is full of action, and excellent acting. Great sets, and locations, and a truly lifting score. (The most recognisable of all westerns.) A really fun film to watch. This and Butch Cassidy and the Sundance Kid, are two must see films, whether you`re a western fan or not.
posted by Dan Maidment on 3/8/2002 15:04
9 / 10

It`s not an easy thing in Hollywood to get an all star cast, the big name actors constantly arguing about who get`s the star billing. However when the actors are willing to put there differences aside and work together the results can be fantastic. Films like Oceans 11(remake), The Great Escape, and this film The Magnificent Seven, are able to make use of so many excellent actors. This film stars Yul Brynner, Steve McQueen, Charles Bronsen, Robert Vaughn, and James Coburn. All of these were huge stars back in the day and it would have been easy for them to hog the scenery and try to steal the lime light, but they don`t, instead they work together, making the best use of each others talents, and this makes the whole film much more enjoyable than it could have been.

The story concerns a small Mexican Village that is being constantly raided by Bandits. They need help to get rid of the bandits so they ride into the local town. There they witness an act of bravery by 2 drifters(Brynner and McQueen) who successfully get an indians coffin into the local grave yard despite the objections of the locals. They approach The main drifter-a man named Chris Adams(Brynner) and ask him to help. He agrees to help them find some good men who will help them for a cheap price. Then he proceeds to round hire another six fighters including McQueen and they set off to the village. There they find the odds heavily stacked against them, so they start training the villagers gun fighting so that the numbers can be a little fairer.

I think that the main thing I like about this film is the realism of the characters. These are not your typical Western heroes who never do anything but chew cigars and stare menacingly. No these smile, and laugh and offer advice to the locals. This trait means that you can become much more involved in the characters, and root for them when the final battle starts. It`s a good approach, and while I`m certainly a fan, of traditional westerns-Once upon a time in The West is one of my favorite films ever-I still wish that more developers had taken this approach.

I don`t need to go into too much depth as I`m sure that most of you have already seen this film by now so in summery this is a classic western. It has a few great shoot outs, and is superbly acted by an all star cast, that is backed up by a well written story. Plus any film that stars the super cool Steve McQueen is bound to be good.


The disk has been treated to a decent set of extra`s. The main extra is a massive documentary that reveals everything from the original idea of remaking Seven Samarai to the release of the film. It tells us about all of the rivalry on the set, particularly from McQueen, a man who has a history of always wanting Star Billing, ultimately the documentary proves very informative. On top of that we have a commentary by the cast and crew, and 2 trailers for the film, as well as the trailers for all of the sequels.


The picture on the disk has been cleaned up nicely. There`s still the occasional bit of grain, but nothing that really gives away the age of the film.


Again the film has come packaged with a good sound track. Voices come through crisp and clear. It`s just a shame that they didn`t make real use of the surround sound for the final gun fight.

A classic remake of another classic, which was then remade into several more classics. This film is a hollywood remake of the Japanese movie Seven Samurai that was directed by the legendary Akira Kurosawa. The movie was made by John Sturges who is well known for bringing all star casts together like in his World War 2 epic The Great Escape, which incidently was made after this movie and also starred Steve Mcqueen and James Coburn. Facts aside, this is a great well made movie. The settings have changed and the length chopped for american audiences. The original japanese movie was about 3 hours long whereas this runs for just over 2 hours as producers probably believed that audiences wouldnt be able to sit through 3 whole hours.

The plot is a simple one and one you have probably heard many a time. A small mexican farming village is terrorised by a large gange of bandits, who always steal their food, leaving them only enough to not starve to death. The villagers then decide that enough is enough and set out to buy guns from the US. On their travels, they come accross Chris (Yul Brynner), who they see knows how to use guns well and ask for his help. He agrees and recruits 6 more men and head out for the village to battle the bandits. The movie scenerio has since been recreated lots of times and may not have the same impact or appeal as it first did but this movie still beats all others with the exception of maybe the original. The acting is strong and though some of the action is dated, you can still feel the courage and compassion, which is indeed timeless.

The widescreen picture quality is well remastered from the original print and is reasonably sharp, clear and glossy. The main problem with the print is the large amount of grain present but that has to be expected of such an old movie. The overall picture is coherant and enjoyable.

The sound is very good and clear. A DD 5.1 soundtrack for a movie this old is quite rare and probably took a lot of work mastering it. The end result is a gorgeous sharp sound. The overall theme of the movie is grand and is presented well.

There arent that many extras for this special edition dvd but for old movies, it can be difficult to get hold of them. We are lucky enough to get a good commentary from the cast and crew and a good making of documentary which is really a retrospective. There are trailers for all the magnificent seven movies and a photo gallery. Overall the supplemental material is very interesting and informative and worth watching.

A magnificent movie on a magnificent disc. Highly recommended.
posted by dicanio on 6/6/2003 18:08