DVD
Magnificent Seven, The (US)

DVD
Eagle Has Landed, The (UK)

DVD
Sand Pebbles, The (US)

The Great Escape out on Blu-ray this June 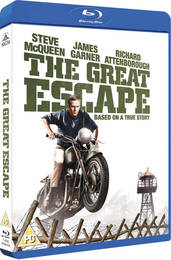 Do, do, do, do, dooo... do, dooo, do, doo, doo... Can you guess what we are humming? Yes, finally, on 3rd June, courtesy of Twentieth Century Fox Home Entertainment, we can all look up at our big screens and say, I can see... I can see perfectly!

1963 classic The Great Escape is coming out on Blu-ray, the classic war prison escape drama, or alternatively that film which is on the telly every Christmas via your gogglebox.

Do you really need a synopsis and trailer? Really? Okay...

In 1943, the Germans opened a maximum security prison-of-war camp, designed to hold even the craftiest escape artists. By doing so, they unwittingly assembled the finest escape team in military history, who worked on what became the largest prison breakout ever attempted.