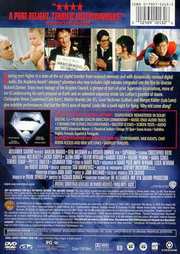 Back Cover of Superman the Movie
Related Items

Superman the Movie (US) 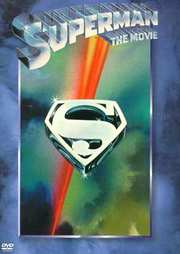 Synopsis:
Soaring even higher in a state-of-the-art digital transfer from restored elements and with dynamically remixed digital audio, the Academy Award®-winning adventure also now includes eight minutes integrated into the film by director Richard Donner. Enjoy more footage of the Krypton Council, a glimpse of stars of prior Superman incarnations, more of Jor-El underscoring his son`s purpose on Earth and an extended sequence inside Lex Luthor`s gauntlet of doom. Christopher Reeve (Superman/Clark Kent), Marlon Brando (Jor- El), Gene Hackman (Luthor) and Margot Kidder (Lois Lane) give indelible performances that fuel the film`s aura of legend. Looks like a swell night for flying. Why not come along?

He`s back! And he`s looking better than ever!
Never before have I looked at Superman in such a fascinating and child like way, well not since I was a child anyway!
From the opening sequence with Marlon Brando playing one of his most moving characters (watch it, you`ll know what I mean.) to the closing shot where old Supes give his sly little wink to the camera, this film is a masterpiece of it`s time.
Now I say "of it`s time" because in all honesty it is a little old now. And it shows. The funny and almost unfortunate aspect is that with the clarity DVD brings, it also brings out the age of the film even more. The print of the film is great, superb quality. But this only serves to highlight the "state of the art" effects that were used at the time. There are times when you can see Supes cape wrap around the wires that are holding him up. There are scenes that blatently look like he lying on a stool while the cameraman wobbles the camera around. But you know what? I love it. It IS a comic book character after all and only serves as an endearing property of the film to make you smirk as you remember the countless rip off you`ve seen on countless TV shows.
So to the DVD aspect of the thing...
The quality is spot on, colours are vibrant and I didn`t notice any artifacts or what not (that`s technical speak).
The extras. These were absolutely brilliant! Three sequences of character casting, including Christopher Reeve (looking rather scrawny), Margot Kidder (although the whole sequence includes many others that were considered for her part), and a sequence showing the process of how they cast the evil woman nemesis of Supes from Superman 2, Ursa. There are three documentaries about the making of Superman spread over the two sides of this double sided, dual layer disk. There`s the addition of several tracks of the musical score, almost an album`s worth. Audio tracks on the disk include DD 5.1, music only and a commentary track.
The commentary track was actually pretty enjoyable with Richard Donner and Joey Siegel (I think) laughing and joking with each other and giving some interesting information on the film and stories of what happened on set. They even sit there through the credits saying things like "Who the hell was he?". Great stuff.
There`s deleted scenes and in my opinion it was a good call to keep them deleted, even from the extended edition. They basically just include two lex luthor scenes and a really cheesey scene where supes comes to the rescue. I`m sure even the actors could tell how cheesey it was because a wry smile is clearly visible on Christopher Reeve`s face.
The content of this DVD was on a par, if not in excess, with other great disks such as Jaws and The Abyss.
With the respect to the actual extensions in this extended edition, they are pretty good and fit fairly well. I don`t think they add a huge amount to the film but make a refreshing change to such a familiar film. One scene I do feel they should have left out was on Krypton where they`re talking to their "High Command" or whoever he was. The costume looks terrible and I`m sure those who see it will agree, looks like something Dr Who costume designers could have even improved on.
The sound quality was, to my ears on my Pro-Logic system very clear and reasonably bassy. Dialog was always clear.

Overall this DVD is superb. One of the best I own. It`s up there with "model" dvd`s such as those I have mentioned and more. A truely great DVD, no, in fact, it`s a SUPERDVD!


UPDATE!!!--- I dunno what DVD wolfie got hold of but I dunno how he can rate any DVD with a director`s comentary, making of, cut scenes, casting reels, etc etc so low. Woflie mate, you haven`t a clue. I don`t know why you bothered buying the film as you`re obviously not a fan and had no clue what you were buying in the first place.
posted by WPKenny on 28/5/2001 14:39
3 / 10

I can´t believe how this picture was rated that (contents:10)
This film was a bullshit and the quality of sound is poor.
So i just want to know if this re-mastered movie had had good sells.
See ya.

Released in 1978,Richard Donner`s epic "Superman" remains the quintessential superhero movie.23 years after it original released has now released the movie as a DVD-18.

Presented in 2.35:1 anamorphic widescreen,this new transfer is much better than excepted.With the exception of the scenes on Krpyton,the picture remains free of any major defects.As described on one of the documentaries,there are three shooting styles in the movie.On Krpyton,the picture remains chromatic and in Smallville the picture is very Norman Rockwell,and when finally in Metropolis,the movie becomes a comic book.

"Superman" also features a shockingly good audio track.This new Dolby 5.1 track is very aggresive and each channel is used to full capacity.The opening title sequence is enough to blow you away.

The main extra on side A is a commentary track with Director Richard Donner and Creative Consultant Tom Mankiewicz.The track is very fun as they are both make lots of jokes.Other
extras on side A include the new deleted scenes,the trailer,cast and crew filmographies,and text on the story of
Superman.

Side B contains 3 excellent 30 documentaries about the filming.The first doc. deals with the development and pre-production.The second doc. deals with the actual filming.The third doc. explains how the visual effects were achieved.Other
extras include another deleted scene,the teaser trailer,a TV spot,additional music cues,and screen tests.

The only problem I have with this release is the packaging.For such a special edition,they should have used something else besides the maddening snapper case.
posted by Adam Morrison on 18/6/2002 21:28
10 / 10

SIMPLY THE BEST. Superman is the best comic-to-movie production ever! (sorry Spider-Man) And this dvd is a must for every dvd collector. This movie made us believe that a man can fly, and despite the absence of CGI during the 70`s, Donner and Co. did a magnificent job of creating this classic. From clear crisp pictures to earth-shaking audio, what more can you ask for? Bringing Superman to dvd was the best thing that happened in dvd history (together with Jurassic Park and ID4). Don`t walk, fly! Get your copy now!
posted by Morgan Stanley on 25/1/2003 09:24