DVD
Superman the Movie (US)

DVD
Strangers On A Train (UK) 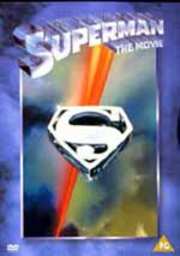 Synopsis:
Soaring even higher in a state-of-the-art digital transfer from restored elements and with dynamically remixed digital audio, the Academy Award®-winning adventure also now includes eight minutes integrated into the film by director Richard Donner. Enjoy more footage of the Krypton Council, a glimpse of stars of prior Superman incarnations, more of Jor-El underscoring his son`s purpose on Earth and an extended sequence inside Lex Luthor`s gauntlet of doom. Christopher Reeve (Superman/Clark Kent), Marlon Brando (Jor- El), Gene Hackman (Luthor) and Margot Kidder (Lois Lane) give indelible performances that fuel the film`s aura of legend. Looks like a swell night for flying. Why not come along?

"The Magic Behind The Cape" - A look at the opticals, flying tests and other special effects that were created for Superman including interviews with the effects supervisor and unit director (23 minutes)
Making Superman: Filming the Legend" - A behind-the-scenes view of how it all came together including interviews with director Richard Donner, Margot Kidder, Christopher Reeve and others (30 minutes)
Taking Flight: The Development of Superman" - The trial-and-error to make a man "fly" and other filming breakthroughs. New interviews with the stars and the film`s creators are included (30 minutes)
Screen Tests - Those who did and didn`t get the part, with a commentary by the casting director Additional music cues
TV spot
Trailers
Storyboard to Screen (DVD ROM only)

This gem is nearly 25 years old, but somehow manages to keep some (yet not all) of its charm.
Starting off with long (way too long) opening titles and credits, the well known story takes its time and the script is somehow slowly paced. A lot of background information is given about the soon-to-be hero, but the information is not too excessive and never slows down the movie too much.
As for the movie itself, well, what was ground breaking stuff in the late 70`s seems a bit lame nowadays, but the movie`s charm is derived from its simplicity (although it was considered very hi-techish back then, and even won an Oscar for the visual effects).
The video transfer is very good. The restoration crew did a great job in cleaning up the movie and the compression level is just right, thus no compression signs can be spotted. The picture is very detailed and the colors (with the exception of the rear projection scenes which seem rather flat and semi lifeless) are very nicely saturated.
The DD 5.1 soundtrack is very good. The surrounds are used very nicely throughout the movie (starting with the way too long opening titles). The 5.1 remix is especially impressive given the fact the original soundtrack was only in stereo.
The menus are all animated with sound.
The extras include: Side A - a commentary by the director and the crew, an isolated music track, 10 deleted scenes, which were seamlessly combined into the movie and some DVD-ROM features (the script and some pictures).
Side B - 3 behind the scenes featurettes (almost an hour and a half in length), some sound clips and 3 deleted scenes.
Bottom line - it`s a classic all right, yet it somehow misses the magic touch it used to have back then. Nevertheless, the video and audio presentations are very good.
posted by Zvi Josef on 18/8/2002 13:36
8 / 10

It would be surprising if there are many people reading this who don't know the story, but here's a short synopsis just in case.

The planet Krypton is doomed. Jor-El, a member of the High Council knows this, but is unable to convince his fellow council members of the fact that the red sun of Krypton is about to go nova. Resigned to his planet's fate, Jor-El launches his only son, the infant Kal-El, into space and far away to the remote planet of Earth. Jor-El chose Earth because of two reasons: firstly our comparative lack of development would give the infant a head start in life, and secondly, proximity to our yellow sun would grant him powers beyond human belief, including superhuman strength, invulnerability, x-ray vision and the power of flight.

After a three-year journey, Kal-El crash lands on Earth and is adopted by a kindly old couple who raise him as their own. Twenty odd years later the adult Kal-El, now going by his adopted name of Clark Kent, moves to the city of Metropolis. He secures a job as a reporter at the Daily Planet newspaper, where he meets feisty journalist Lois Lane. Before long Clark is called upon to use his super powers to help others, and Superman is born. Just as Metropolis and the world are coming to terms with a man who can fly, arch villain Lex Luthor is plotting the real estate deal of the century. As part of his nefarious scheme, Luthor plans to destroy California, with only Superman possessing the powers to stop him.

This special edition of the film includes ten previously deleted scenes re-integrated into the theatrical version to give it a running time of approximately 146 minutes. The new scenes expand the narrative in a few key places, while providing a little more action in others. On the whole they are a welcome inclusion.

The principal cast all do a fine job, with the acting falling slap bang in the middle of the camp and the serious. It's surprising just how many major stars are in this film, most notably Marlon Brando and Gene Hackman. Brando plays Jor-El, and brings an undeniable air of authority to the role. Hackman on the other hand seems to relish in the over the top character of Luthor, and his are some of the finest scenes in the film. In spite of these, and many other fine supporting roles, there can be now doubt that the real stars are the then unknown Christopher Reeve and Margot Kidder. Reeve plays Clark Kent and Superman as two distinct characters, giving both unique personalities which really helps to convince you that people wouldn't be able to tell that Superman was just Clark Kent without his glasses! Kidder is excellent as the tenacious reporter who falls for Superman, never suspecting that he is right under her nose the whole time.

Presented in anamorphic 2.35:1 widescreen, the image quality is very good throughout. Warner have obviously spent time restoring the video, as there is little evidence of dirt or scratches and the colours are bright and vibrant. It is a little soft compared to new releases, but then the film is over twenty years old. When you take this into consideration you really do appreciate the work that has gone into the transfer and Warner are to be commended.

Featuring a Dolby Digital 5.1 soundtrack, Superman is one of the best sounding DVDs I've heard in a while. Apparently the effects track had deteriorated so badly it was necessary to create an entirely new track for this DVD. When combined with the dialogue and musical tracks the effect really is fantastic. The surrounds are constantly in use; from the way the credits seem to whoosh over your head during the title sequence, to the many flight sequences in the film, the audio is top notch.

The John Williams score is typically excellent, and really adds to the overall quality of the audio. Williams' scores really do become synonymous with the films they accompany (Star Wars, Jaws etc) and this is no exception. I defy anyone not to hum the title tune after watching the film! This is one of the best examples of a remixed soundtrack I have yet to hear.

The list of extras is pretty comprehensive, and includes the following features: an audio commentary from Richard Donner and Tom Mankewicz, three sets of screen tests (for Superman, Lois Lane and Ursa), three documentaries including 'Taking Flight: The Development of Superman' (30 mins), 'Superman: Filming the Legend' (30 mins, 'The magic behind the cape' (25 mins), deleted scenes, theatrical trailer, TV spot and an isolated musical score.

The commentary track is very interesting, with a lot of insight into the creative process and many amusing anecdotes. The interaction between Donner and Mankewicz is great and their conversation is full of banter. It's obvious from the commentary that Richard Donner went to extreme lengths to make sure his vision ended up on the screen.

The featurettes are very interesting, with a lot of behind the scenes footage and the like. They also feature interviews with most of the principal cast and crew and they are even introduced by the bloke who played Jimmy Olsen. They are divided into three segments, casting, shooting and special effects. Some of the early tests for Superman's flight are very amusing indeed. Just be thankful we didn't end up with the wooden Superman they proposed to use!

Deleted scenes comprise of two scenes involving Lex Luthor's underground lair. The first sees Luthor ordering his henchman Otis to feed his pit full of ravenous lions, while the second sees Superman save Eve Tescmarker from those same lions after she has betrayed Luthor.

The screen tests are very interesting, and it's an amazing insight into just how the process of casting is accomplished. It seems Reeve was always destined to be Superman, but a fair few people were considered for the part of Lois Lane. However it is clear even from these tests that the best actress got the job.

The theatrical trailer and TV spot are fine for what they are, but they're obviously not going to set the world alight. A very welcome inclusion is the isolated score, which really showcases John Williams' brilliance and is the icing on the cake of what is a very nice collection of extras.

A fantastic adventure on a fantastic disc, that's the best way to describe Superman. Everything about this release oozes quality, from the excellent audio and video to the generous and informative extras. Fans of the film will be overjoyed with this release, and if you're new to the adventures of the man of steel then this DVD will most likely convert you. Warner Brothers have done a great job and have produced one of the best discs of the year. Now if only they'd stop using those awful snapper cases. In spite of that little caveat Superman still comes very highly recommended.
posted by Chris Gould on 20/12/2002 23:59