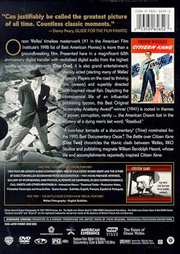 DVD
Strangers On A Train (UK)

DVD
Superman the Movie (US)

DVD
Two For The Seesaw (UK)

DVD
Clash Of The Titans (US)
Related Articles 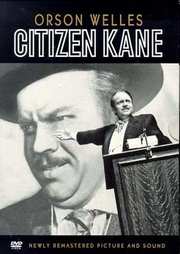 Synopsis:
Orson Welles` timeless masterwork (#1 in the American Film Institute`s 1998 list of Best American Movies) is more than a groundbreaking film. Presented here in a magnificent 60th anniversary digital transfer with revitalized digital audio from the highest quality surviving elements (Disc One), it is also grand entertainment, sharply acted (starting many of Welles` Mercury Players on the road to thriving film careers) and superbly directed with inspired visual flair. Depicting the controversial life of an influential publishing tycoon, this Best Original Screenplay Academy Award® winner (1941) is rooted in themes of power, corruption, vanity -- the American Dream lost in the mystery of a dying man`s last word: "Rosebud."

Writing a review about "Citizen Kane" is not easy. What can be added that has not already been discussed in the sixty years since the film's release? Books, dissertations, American college courses and various 'Arty' books have been devoted to examining, analysing, deconstructing and making something extra of Orson Welles' first film, made when he was 25. It is, after all, one of the films that most people have heard of but so few have actually watched, especially in a cinema.

Orson Welles had already made a name for himself - but not much money - with such theatre work as the staging of Shakespeare in Harlem and his famous 1938 "War of the Worlds" radiobroadcast that sent America into a panic. RKO Pictures gave him carte blanche in directing his first film and after several false starts on other projects (including an aborted attempt at filming Joseph Conrad's "Heart of Darkness"), Welles collaborated with screenwriter Herman J. Mankiewicz to flesh out his vision of an American tragedy.

Looking at the studio as "the greatest train set a boy could ever play with," Welles surrounded himself with equally gifted individuals: cinematographer Gregg Toland, composer Bernard Herrmann and RKO staff editor Robert Wise (later to direct "The Sound of Music" and "West Side Story")

Welles knew perfectly well what he was doing when he modelled Kane on real newspaper barron William Randolph Hearst. He used incidents and actual published words from Hearst for his own character Kane. Kane's Xanadu mirrors Hearst's San Simeon on the California coast and the way that Kane built his newspaper empire followed the real life exploits of Hearst, however it was the portrayal of actress Marion Davies (Hearst's mistress) as Kane's lover failed singer Susan Alexander that caused the bitter feud between Hearst and Welles. Hearst was quite used to people being rude and spiteful about him - but with his money and power he did not care - but the idea that his lover was portrayed as a failed singer and a drunk caused such anger that Hearst tried to destroy both "Kane" and Welles, marshalling his considerable media forces (among them gossip columnist Louella Parsons) in an all-out campaign to eradicate the film and discredit its creator.

The film was released in 1941 but was not a success. Due to wartime or whatever, the public did not want a powerful melodrama about the rich and famous. Unlike, say, Rupert Murdoch, William Randolph Hearst was not a world-wide media barron so although he did what he could to kill the film with negative columns in his newspapers and a refusal to take advertising for the film this only explains partly why the film was a failure in the US - not the rest of the world.

What about the DVD?
I have seen the film a number of times in the cinema, and each time the print was - at best - adequate, and the showings on tv and the video released a few years ago have not been much better.
Warner Home Video's two-disc DVD special edition on the other hand comes from the recently restored fine grain master, presented in its original 1.33 ratio, the transfer just glows. Like, for example, Criterion's "The Third Man", "Citizen Kane" shows what a wonderful medium well photographed Black and White is for a dramatic story. With a pristine transfer, clean audio and a lot of extras including commentary tracks by director/Welles biographer Peter Bogdanovich and film critic Roger Ebert, archival materials as well as the PBS documentary "The Battle Over 'Citizen Kane.'" This all adds up to a must for the serious film buff.

Two feature length commentaries deconstruct the film from slightly different angles. Film director / Welles biographer Peter Bogdanovich goes on at a leisurely pace, giving some scenes specific information and then taking off on a tangent about John Ford or Herman Mankiewicz. The musings on Roger Ebert's commentary track, however, dissect the film frame by frame, pointing out how lighting, edits, close-ups and long shots reflect earlier moments or foreshadow later scenes. This is from someone who thinks that "Citizen Kane" is the greatest film ever, when quite clearly it isn't. "Citizen Kane" ranks in the world top 100 films, but only in the top quarter.

The supplements continue with footage from the 1941 New York premiere at the Palace Theater. Only a minute, the RKO-Pathé newsreel highlights the arrival of Orson Welles (with Dolores Del Rio) as well as showcase the elaborate marquee and throngs of moviegoers having their ticket stubs processed by very well dressed ushers. The original theatrical trailer shows some physical wear (speckles, scratches) and the tinny sound pales when compared to the feature. Running three and a half minutes, Welles narrates the coming attraction, touting the stars and subject matter in a manner all his own.

The remainder of disc one contains the galleries and other memorabilia documenting the film's inception, production and release. "The Production," "Post Production" and "Production Notes" mark each chapter of archival materials. Press book shots, posters, even a letter from George Gallup breaking down the audience reaction demographics. Also, on the Special Features menu page, there is a sled. Cursor over to it, hit "Enter" and a four-minute interview with Ruth Warrick (Emily Norton Kane) pops up. Filmed in 1997, she talks about how it was her first film and of course working with Orson.

Disc Two contains the documentary "The Battle Over Citizen Kane", produced in 1995 for American PBS, it briskly charts the historical paths of William Randolph Hearst and Orson Welles and how they were seemingly destined to clash. In Thomas Lennon and Michael Epstein's two-hour film, they crosscut the upbringing of Welles and Hearst, how both were born of privilege and how both became barrons in their respective fields.

Over all a wonderful DVD set - a good film with an excellent transfer and interesting extras is all that anybody can ask.
posted by Tony Myhill on 4/1/2003 14:40