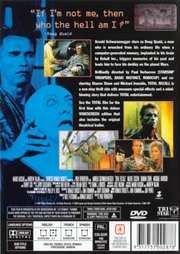 Back Cover of Total Recall 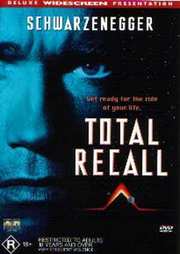 Synopsis:
Arnold Schwarzenegger explodes out of the year 2084 A.D. with gut chrunching, white knuckle, non-stop action, as he smashes his way through a horrifyingly real fantasy world, complete with a gorgeous but deadly wife (Sharon Stone), and into a mind-bending, nightmarish reality of a Martian mining colony ruled over by a terrorizing dictator (Ronny Cox), who can alter reality to suit his whims.

The red planet erupts with rebellious mutants, the fire of an alluring and mysterious woman (Rachel Ticotin) and a vicious and savage enemy.

R4 continues to impress me with yet another superior release. Total Recall is, in my opinion, one of Arnie`s best, up there with the first and second Terminator films, and Predator.

I`m sure everyone knows the story by now (the film is over a decade old), so I`ll dispense with a lengthy explanation, but here`s a brief synopsis:

Arnie plays Doug Quaid, a man who is not what he appears to be. Quaid keeps having recurring dreams about Mars, strange alien artefacts, and a mysterious woman. In spite of warnings from his wife (Sharon Stone), Quaid takes a trip to Rekall Inc., a company that specialises in artificial memory implants. Hoping to receive an implanted memory of his dream vacation, Quaid doesn`t bet on something going wrong with the process. After waking up in the back of a cab, with no memory of how he got there, Quaid finds himself the target of all manner of unpleasant characters. On the run, not knowing who to trust, he sets off for Mars in an attempt to discover the truth. But is Quaid really who he thinks he is, or is it all just an elaborate `head trip`?

They don`t make films like this any more. You just couldn`t get away with it today. For a start a film such as this would be bogged down with so many computer generated effects as to be untrue. There`s something very satisfying about 80s and early 90s action flicks, and Arnie did them better than anyone. I love their purity, they don`t pretend to be anything they`re not (unlike a film such as The Matrix, with it`s philosophical undertones). They are popcorn-munching thrill-rides and that is all. This is one of the better examples of the genre, with a good premise and engrossing set pieces. The film is violent, a Verhoeven trademark, but not excessively so. The acting is competent, and actors such as Ronny Cox and Michael Ironside give good performances. Even Arnie (who, let`s face it, isn`t the greatest actor in the world) is better than usual, although his one-liners are still groan inducing. Sharon Stone also looks particularly tasty in this flick. Total Recall can`t stand up to the likes of The Phantom Menace or the aforementioned Matrix in the special effects stakes, but it still has the ability to entertain more than a decade after it`s release.

Video is presented in anamorphic 1.85:1. There are a few noticeable instances of grain, but this can be forgiven for a film of this age. They don`t particularly detract from what is a good overall transfer. Suffice to say that this DVD does the film justice visually.

Sound comes in the form of either Dolby Surround or Dolby Digital 5.1, the latter obviously being the format of choice. The 5.1 mix is great, the bass growls suitably during the films many explosions, and dialogue remains clear throughout. The surrounds are also used to good effect when called for.

Extras, to be fair, are pretty dire, with only a teaser trailer on offer. This is of poor quality too, and I doubt it`ll be given a second viewing. This film had so much hype at the time; they should have been able to dig up a few more trailers, featurettes and interviews etc. The disc is also crying out for a commentary track. Paul Verhoeven`s other commentaries are often amusing, although he does tend to slide into irrelevancy occasionally.