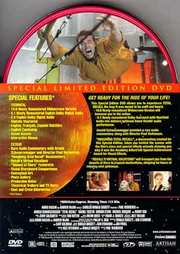 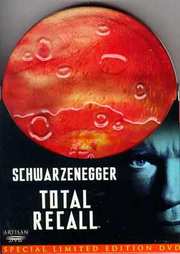 Synopsis:
Arnold Schwarzenegger explodes out of the year 2084 A.D. with gut chrunching, white knuckle, non-stop action, as he smashes his way through a horrifyingly real fantasy world, complete with a gorgeous but deadly wife (Sharon Stone), and into a mind-bending, nightmarish reality of a Martian mining colony ruled over by a terrorizing dictator (Ronny Cox), who can alter reality to suit his whims.

The red planet erupts with rebellious mutants, the fire of an alluring and mysterious woman (Rachel Ticotin) and a vicious and savage enemy.

paul verhoeven + the writer of alien = one of the best sci-fi
movies of all time,the film may be confusing but what it lacks
in plot gains with it`s ultra-violence(eg;michael ironsides death)
as for the extras there are some interresting documentrys but
the arnold schwarzenneger and paul verhoeven commentry
really does entertian you.
posted by verhoeven on 11/11/2001 10:32
7 / 10

Paul Verhoeven`s 1990 violent sci-fi flick remains one of Arnold`s most enjoyable movies,with Artisan now releasing the movie as a "special edition limited DVD".The packaging is pretty cool with the disc and booklet kept in a metal tin designed like the surface of Mars.The only problem is that it`s terrible for shelving.

"Total Recall" is presented in 1.85:1 anamorphic widescreen and despite some minor flaws including some inaccurate fleshtones,the picture is generally pleasing.

The audio fares better with a new Dolby 5.1 track that remains engaging and makes good use of the channels.A Dolby 2.0 surround track is also on this disc,but is quite inferior.

The first extra is an audio commentary with Director Paul Verhoeven and Arnold Schwarzenegger that remains very humorous and entertaining through out the movie.

Other extras include a 30 minute documentary that is well made and full of information.There is also a featurette on the actual Mars,visual storyboard comparsions,conceptual arts,a photo gallery,production notes,cast and crew info,and finally theatrical trailers and TV spots.
posted by Adam Morrison on 18/6/2002 21:01
8 / 10

In the not too distant future, Douglas Quaid (Arnold Schwarzenegger) is an average guy with a steady job in construction and a beautiful, loving wife (Sharon Stone). For reasons unknown, Quaid is having recurring dreams about Mars, strange alien artefacts, and a mysterious woman. In spite of warnings from his wife he takes a trip to Rekall Incorporated, a company that specialises in artificial memory implants. Along with the memory of his dream vacation on Mars, Quaid decides to go for the latest in virtual vacations, the "Ego Trip". This little optional extra allows a person to change the one thing about their vacation that is always the same - themselves. Opting for the persona of secret agent, Quaid settles back for his trip, but he doesn't bargain on something going wrong with the process…

After waking up in the back of a robotic cab, with no memory of how he got there, Quaid finds himself the target of all manner of unpleasant characters. First, his construction co-workers try to kill him, and when he turns to his wife for help even she tries to shoot him! On the run, not knowing whom to trust, he travels to Mars in an attempt to discover the truth about his past. But is Quaid really who he thinks he is, or is it all just part of the elaborate head-trip?

Total Recall is a refreshing blast from the past. It's an out and out action movie, one without an endless stream of CGI getting in the way. The film is also more intelligent than you might expect, and repeated viewings reveal hidden depths to the story. You begin to wonder if the events in the film really are happening, or if they are the product of one man's delusional mind.

Total Recall is a violent movie, some would say excessively so, but this is to be expected from the director of such films as Robocop, Basic Instinct and Starship Troopers. Some of the action set pieces are fantastic, and once the action starts it doesn't let up. Acting is competent from most of the cast, especially from Ronny Cox (who is basically reprising his bad guy role from Robocop) and Michael Ironside. Ironside is one of those guys who is just, for want of a better word, cool. Arnie himself is on top form, spitting out corny one-liners while dispatching an army of evildoers without breaking a sweat.

Total Recall is an effective antidote to the CGI nightmares of today, and still has the ability to entertain more than a decade after its original release. The film's slightly ambiguous ending is nicely done and Total Recall remains one of the best examples of the genre. It is, in my opinion, perhaps Schwarzenegger's best work.

Total Recall is presented in anamorphic 1.85:1. On the plus side, colours look balanced and natural, blacks are deep and the level of detail is very good. Unfortunately grain and print damage pop up more frequently than I would have liked, and there are a few noticeable instances of shimmering scenery and the like throughout the film. The special effects, which were cutting edge at the time of the film's release, are a little dated by today's standards. Having said that they still hold up to scrutiny. This certainly isn't a bad transfer by any means, but I was expecting something special for this release.

The Dolby Digital 5.1 mix is very impressive. Usage of the surround channels is superb, whether it be the subtle use of the score to provide ambience or aggressive use during the many action scenes. The LFE channel also works overtime, with numerous explosions and spacecraft eliciting wall shaking rumbles from the sub. In spite of all of this sonic fury the clarity of the dialogue is spot on, with Jerry Goldsmith's excellent score providing the finishing touch to this highly accomplished track.

In stark contrast to the R4 release I used to own, this special edition of Total Recall comes packed with bonus material. First on the list, and the main reason I was looking forward to getting my hands on this title, is the audio commentary from director Paul Verhoeven and star Arnold Schwarzenegger. Unfortunately the commentary is a bit of a letdown, as Verhoeven rants on in his own inimitable style with Arnie occasionally chiming in to agree with him. For the most part they narrate the on screen action without going into any real detail, although Verhoeven sometimes offers the occasional anecdote and is generally more informative than Arnie. It's not a terrible commentary, but it's just not as interesting as I hoped it would be.

Moving on we come to a documentary entitled Imagining Total Recall. This thirty-minute documentary features interviews with Ron Shusett, Paul Verhoeven, Arnold Schwarzenegger, Rachel Ticotin, Sharon Stone and others. The participants discuss the origins of Total Recall, elements of production from casting to special effects, the violent nature of the film and even the idea that the whole reality of the movie may have been nothing more than a dream. I found the documentary very interesting, perhaps more than the commentary. I actually wish it could have been a little bit longer to accommodate a deeper exploration of the film.

Next we have Rekall's Virtual Vacations. This is a bit of a gimmicky feature, but a fun one nonetheless. Basically you're given three scenes to select from, 'Dunes of Mars', 'Planet Limina 3' or 'Earth Beach', which when selected play a short video loop of the chosen setting with some nice ambient effects. It's similar to those relaxation tapes you can buy that feature running water and bird song etc.

'Visions of Mars' is a five-minute featurette on the red planet. It makes for interesting viewing, and features interviews with NASA scientist Dan McCleese and a 'tour' of the planet, as well as some theories on how man will travel to Mars. Worth a look if you're even slightly interested in space exploration.

Next up we have some visual storyboard comparisons. These show the original storyboards for three scenes, along with a small video window that plays the corresponding scenes from the finished movie. These are worth maybe one of two viewings, but aren't the most exciting of features.

Also included are the film's theatrical trailer and three TV spots. These make the film look like an exciting, action-packed adventure, and they're not steering you wrong.

Bringing up the rear we have some conceptual art and production photo galleries, along with production notes and some fairly detailed cast and crew biographies. These are fine for what they are, but if you've read any of my other reviews you'll know that I'm not particularly interested in them.

Finally, one of the best no-brainer action flicks of the 80s/90s gets the treatment it deserves. Combining solid audio and video presentation with a good selection of special features, Total Recall is a definite winner. If you like your movies full of action, explosive special effects and groan worthy one-liners, you could do a lot worse than Total Recall. Recommended.

Note: As of the 21 May 2002, Artisan will be shipping the disc in an Amaray case, rather than the limited edition tin packaging that my review copy arrived in. The tin packaging isn`t all that great, so this shouldn`t be of any consequence to the majority of people.
posted by Chris Gould on 20/12/2002 23:43
9 / 10

Yet another blood-soaked action film from Dutch director Paul
Verhoeven. I have mixed reactions with this film. Most of it is enjoyable but when he goes to Mars it goes a little of the tracks, Aliens for example but it`s still fun all the same. Again
Arnold Scwarzenegger is good in the lead as Doug Quaid. With good support by Sharon Stone as his betraying wife and Racheal Ticoton in the lead female warrior role. It also features some nifty special effects.

The 5.1 is good and a welcome edition to this`Special Edition`

The picture is good, but does have some minor flaws.

The `rare` Audio Commenatry by Director Verhoeven and star
Arnold Schwarzenegger is good and informative. The rest are features on the look and special effects of Total Recall and in a surprise twist Rekalls Holdiay Places which throughs up a few laughs.
posted by the_film_king on 7/8/2003 17:24
8 / 10

The picture quality is very good and is just as good as Momentum`s R2 release. The sound quality is also pleasing.

First extras is an audio commentary from Paul Verhoeven and Arnold Schwarzenegger. While the commentary is fairly good, the two spend a lot of time just narrating what is on screen. There are some insights into the production but not as much as I hoped. The new documentary is much better and features plenty of info. Other extras include a brief but interesting look at Mars, conceptual art, storyboards, photo gallery, several trailers and TV spots and a few text based extras.