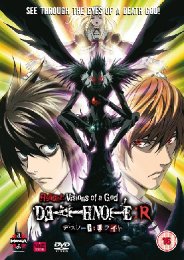 Milk it! Milk that franchise! Milk it until there's nothing but bloody pus left oozing from those bruised and abused nipples of anime creativity! It's the fate of all successful creative endeavours to be repeated, recycled, sequelised and remade into incoherence, and that's no less true for anime. Death Note has been a veritable phenomenon since the first manga was released, and it has begat an anime series and three live action films, novels and there is even a potential Hollywood remake in the works. And as so often happens with successful anime series, they get edited down and repackaged as feature films, somehow condensing ten hours of narrative into a two-hour runtime. It's rarely successful. Manga Entertainment are caught in a no-win situation though. The Death Note anime features are not of their making, rather they come from the source, Madhouse Studios in Japan. And for every critic like me who will bitch about this release as wasteful of a release slot, there will be ten hardcore Death Note fans that will demand its release just to ensure that their collection is up to date. 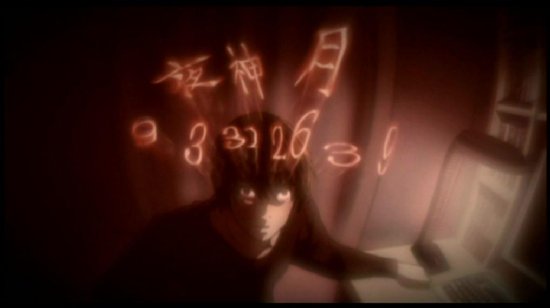 I just think that it confuses the issue, as there is now a manga series, a 37 episode anime series released over five volumes and in a series boxset, there are three live action features, and now there will be two anime features, put together from the anime series. When you go to buy the movie, you'll have to be precise in just which one you want. Still, what do I know? Manga Entertainment have had this problem before with their previous flagship title Ghost In The Shell, releasing first the two Stand Alone Complex Series, and then releasing the Stand Alone Complex movies created from those shows. The surprising thing was that the Stand Alone Complex movies weren't actually that bad, indeed The Individual Eleven turned out to be a pretty gripping thriller of a movie. Also, the fact that the Death Note manga has already been adapted into two pretty decent live action feature films shows that it can be done. There is a chance that these two forthcoming anime movies will offer a different level of entertainment than the anime series, a quick hit of Death Note goodness, distilled and refined into two hours. Maybe… 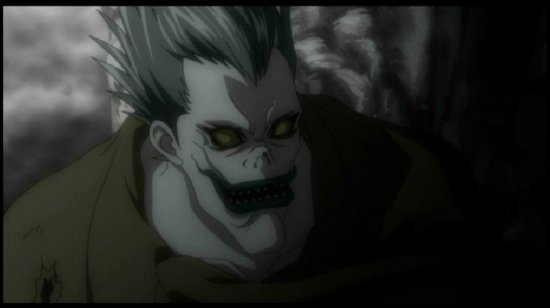 I've written about Light Yagami's adventures with the Death Note and the Shinigami, and his mental duel with master detective L over 7 times now. You can check out my reviews of the individual volumes to see what's what, or you can click on Stuart McLean's review of the Death Note Boxset for a proper synopsis. What you need to know about this film is that it covers the L arc, the first 24 episodes of the series, re-edited and shaped into a feature length story, with new animation and new dialogue from the characters. To give it a twist beyond just a simple cut and paste, the events of the story are framed in a monologue from Ryuk, who relates the tale to one of his fellow Shinigami.

So is the first Death Note Relight movie gold top, or bloody pus?

I get the feeling from the extras that this Death Note feature was created first and foremost for television broadcast, unlike the Stand Alone Complex features that got theatrical presentations. Also the original Stand Alone Complex releases were somewhat flawed, whereas the Death Note releases weren't so much. I guess what I'm trying to say is that the Death Note Relight feature looks just like the series in terms of video presentation. 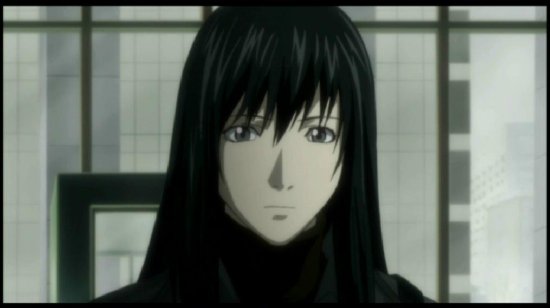 It gets a 1.78:1 anamorphic transfer that is typical of modern anime. It's clear and sharp enough, with only the barest of NTSC-PAL transfer signs worth mentioning, in this case a slight judder in pans and scrolls. The animation courtesy of Madhouse Studios is top notch. The character and world designs are excellent, and the level of detail and fluidity of motion speaks to a high investment in the animation. The look of the show suits the story well, with the Shinigami realm a suitably dark and creepy otherworld, while the city gets a cold impersonal feel, with everything in pastels and understated. As you would expect from a show with such dark themes, there's plenty use of shadows and moody lighting. It makes for a rewarding viewing experience. There are some new scenes to appreciate, and they are a little variable. Some aren't up to the original anime quality, while some, like Ryuk's narrative bookends, and the new first meeting between L and Light are actually far superior to the original anime. You can also see that CG models like cars and other vehicles have had a general spruce up, and there are plenty of little touches to differentiate the movie from the series. 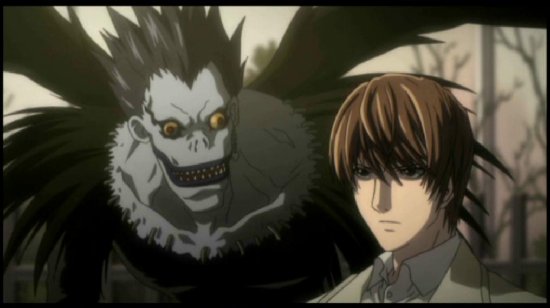 Just as the video remains the same, the audio fails to get an upgrade as well. You have a choice of DD 2.0 English and Japanese, with optional translated subtitles and a signs track. You won't get any complaints from me when it comes to the English dub, which is cast very well. All the voices suit their characters, and the performances live up to the hype surrounding the anime. Of course my preference as always is for the original language track, and there were no problems here either. There is some new music to go with the new edit, and the incidental music is really quite notable, taking a leaf from Danny Elfman when it comes to spooky and quirky, and certainly suits the bizarre Ryuk character down to a T.

You get an 11-minute featurette with the Japanese cast and crew, talking about converting the series into a feature film, and how they attempted to make it more than just a re-edit. There are 4 minutes worth of promos for the feature film, and there are trailers for the Death Note live action movie, Bleach and Naruto. 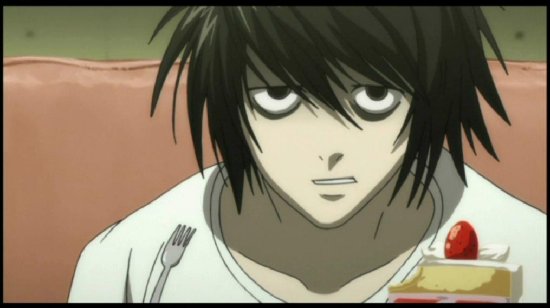 It's bloody pus! The recap movie is such a well-established phenomenon in anime that there are movies that do buck the trend and become more than the sum of their parts. At one extreme you have the Adolescence of Utena movie, which threw the series into the bin, and started again from scratch, and the Ghost In The Shell: Stand Alone Complex movies lie somewhere in the middle, using the existing footage to tell the same story, but from a different perspective, and with the use of creative editing offering something new for fans to appreciate. The first Death Note anime feature lies at the other extreme. This is Death Note: The Highlights Package. 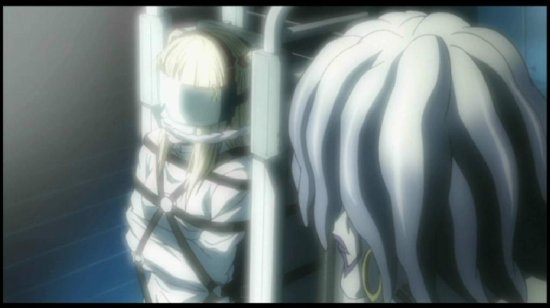 I was also overoptimistic when I said that the live action movies managed to tell the story, so this anime version should manage it as well. The live action movies told the L arc of the manga storyline in 2 features. This anime adaptation tries to do it in half the length, and fails completely. Cramming 24 episodes of narrative into just over 2 hours needed more creativity and ingenuity than was applied here. Simply book-ending the notable moments of the anime with a monologue from Ryuk is no great innovation. The thing about Death Note is that it's all focused on character and motivation. You need to get inside the heads of these people, understand their thinking, why Light picks up the Death Note and embarks on his mission to reshape the world, why Misa helps him, and why the battle of wits between L and Light becomes so compelling. Just showing the highlights of the anime and shaving the character arcs to a bare minimum, leaves you with a story that is wholly unpalatable. Light goes straight into psychopath mode in the movie, there's no explanation as to why the investigation goes from Interpol, to the Tokyo Police, to five men in a skyscraper, indeed much of the essential exposition is dropped, leaving gaping plot holes where a story used to be. 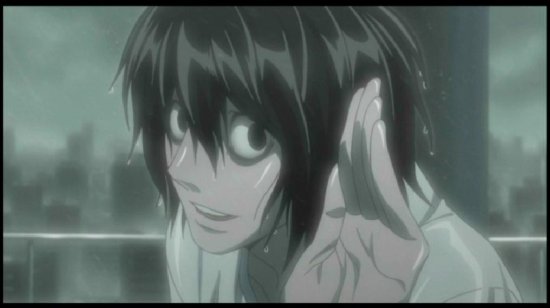 So what is the point of this exercise then? I suppose this feature is of use to people who don't read novels and just scan the blurb on the back of the book. I must admit that some of the new animation looks remarkably pretty. But really, this feature is just a waste of time. The second feature may have a better time of it, squeezing as it does just 13 episodes into its runtime, but really, you should just invest in, and make time for the series instead. That is the best way to experience the story.