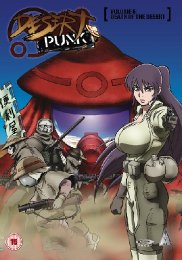 Post-apocalyptic wastelands are a penny a dozen in fiction, and the one in Desert Punk is truly a classic of the genre. A devastating war has wiped out most of civilisation, and the dregs and descendants of the survivors now eke out a living in an endless desert where Japan used to be. People being people, many of them survive by preying on the weak, and this is truly a society where might is right. You'd expect there to be a champion standing up for the weak and oppressed, someone still possessing a moral backbone and a sense of justice. You'd be wrong. There is however the Desert Punk, a.k.a. Sunabozu a.k.a. Kanta Mizuno. He's a cold hard mercenary character who is in it solely for the cold hard cash. Diminutive in stature, and masked behind a hi-tech helmet, he's fast, wily and is just as likely to outwit his opponents, as he is to outfight them. He's developed quite a reputation in the Great Kanto Desert, but he has one, or rather two distinct weaknesses. Breasts! He can't get enough of them. And when one day he encounters Junko Asagiri, a rival mercenary with an exquisite cleavage, he's truly met his match. The final set of four episodes of Desert Punk is presented here on this concluding disc from MVM, along with a handful of extra features. The review is presented here with a whole lot of spoilers; so if you haven't seen the first five discs, go away. 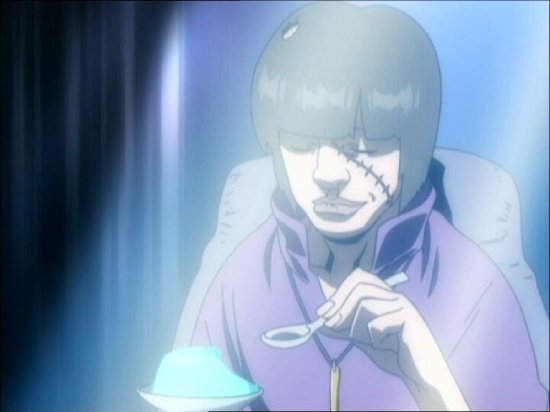 21. Master and Pupil, Part II
When last we saw Sunabozu, he was in the middle of an almighty explosion, one that appears to have sent him to the next world. When we catch up with Kosuna six months later, she's still mourning her fallen master, but has decided to take up the Desert Punk mantle. She has gone into business for herself as a handyman, vowing to espouse Kanta's finer mercenary qualities. Sunabozu Mark II has arrived, and she has her own little apprentice in Mitsuru to boss around. Since Desert Punk's demise, the Kawazu clan has sought to re-establish itself, and Kosuna's latest mission is to clear them out. Their boss still has a fascination for desserts, this time he's into jelly, and he still suffers from Hulkosis. Kosuna maybe outmatched. Fortunately, Mitsuru may be wimpy, fumbling, and eternally apologetic, but he does come with special skills.

22. Rain and Sea
Kosuna's next mission is bittersweet, a job to protect the Reverse Handyman Group while they conduct their first major conference, and it means going back to the 85th Skeleton City, where they first encountered that Dark Age Tech Guardian. But odd things are happening. First Matsunami, who made some of Kanta's equipment, gets an order for one of Kanta's classic Rocket Winches, then the conference is attacked by an invisible android assassin, and it turns out that there is a new player in town controlling the android, a sharpshooter who knows his way around the desert. 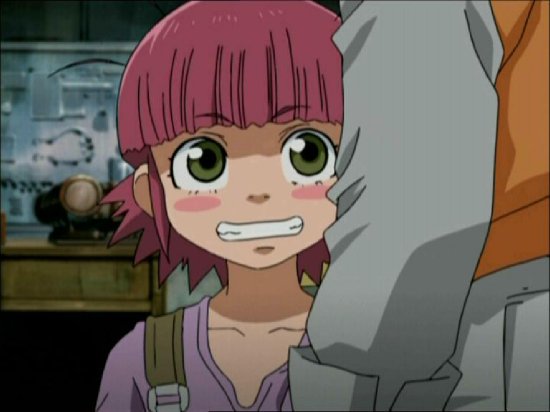 23. Doubt and Ambition
Kosuna is having nightmares about what happened to Matsunami and his family, but that's no reason to give up on her life's calling. Her next job is to join the Kawaguchi brothers to protect the RHG laboratory, hidden deep within the Kanta crater. But this is no heroic endeavour. Kaizuka who lead the Reverse Handyman Group is looking to depose the Oasis government, and the only way to do that is to fight fire with fire, he's busy creating an army of Dark Age cyborg Guardians. The Oasis government isn't having that, and to that end they have hired a couple of familiar faces to lead their robots into battle. Junko Asagiri has got hold of the rebuilt Kong hovertank, and this time she's playing for keeps. And behind it all is a mysterious shady figure that knows his way around the desert like a pro, exactly like a pro that Kosuna once knew.

24. Taiko and Kanta
The conclusion. 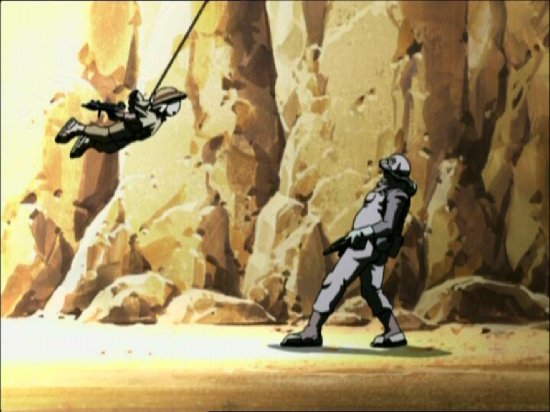 This was one of Gonzo's last 4:3 anime, and naturally the transfer reflects that. The live action opening sequence that I've whinged about for the last 12 episodes has gone, as this volume debuts two new credit sequences, but this time around, there is evidence of that odd vertical banding in the episodes on this disc. It's subtle, and doesn't affect the viewing experience, but if you look for it you will notice it. The animation is dynamic and vibrant; there is a singular style to the character designs that emphasises bold lines, and high contrast, while the desert setting quite understandably invokes a limited sandy palette of colours, as well as lots of sere, parched landscapes. This is a show where darkness and light play a big part in setting the atmosphere, and it works brilliantly in establishing the mood of the show. 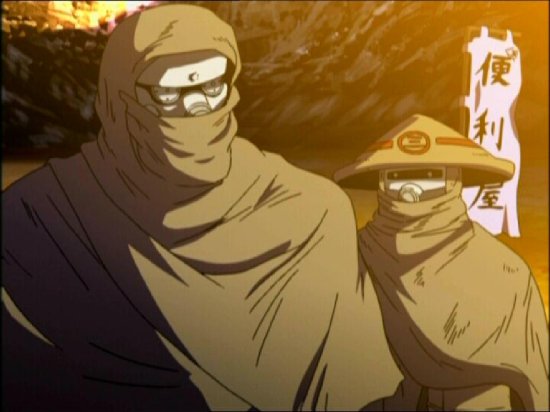 You have a choice between DD 5.1 English, and DD 2.0 Japanese, along with translated subtitles and an optional signs track. I watched it through in Japanese first and found it to be a wholly enjoyable experience, the stereo doing a good job of conveying the action scenes, the incidental music for once preferable to the theme tunes, and the dialogue clear throughout. As the series has progressed, I've fallen out of love with the dub, as the preponderance of masks has ebbed, and the actors are once again constrained by the need to match lip flaps. The dub has started sounding awkward and cumbersome in comparison to the early episodes, and I find that I've switched back to the original language now. I must admit that re-recording the theme songs with English lyrics is never advisable.

Volume 6 only gets an audio commentary to accompany episode 24, featuring ADR director Jeremy Inman and voice actor Zachary Bolton. I gave up after 5 minutes of talking over each other and toilet humour. Apparently it's unlike the usual anime commentary. If you find out this is true, do your utmost not to e-mail me about it.

There are the textless credit sequences of course), and the whole thing is rounded off with trailers for Disgaea and the Gravitation OVA. 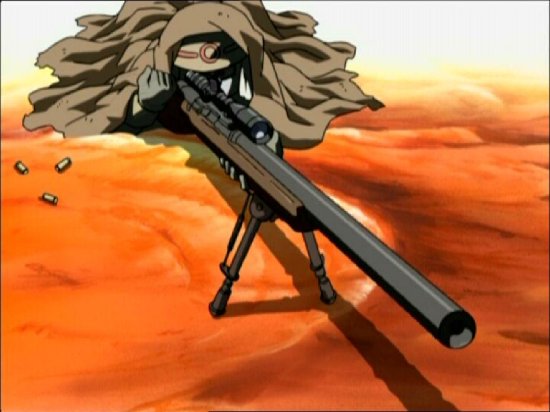 There are disappointments, disappointments and whopping great disappointments. Guess which one this is. The thing is that the conclusion of Desert Punk isn't technically bad. As so often happens, Gonzo come to the conclusion of an anime before the manga story itself finishes, and they have to devise a story ending that satisfies the viewers and the characters. They don't often get it right, with shows like Trinity Blood and Black Cat in particular suffering from the Gonzo tendency to rush the story, cram in all the characters, and throw in lots of cool explosions. There's some of that in the final four episodes of Desert Punk, there are certainly cool explosions, and some of the early characters do get an unexpected look in, but the story itself is paced decently, unfolds naturally, and throws in some interesting twists and turns on its way to the final end credits. 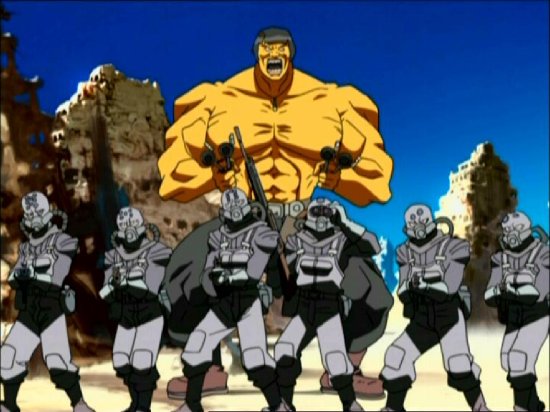 It's just that I hate it. I hate what it does to the characters. Desert Punk has established a harsh world with brutal challenges to those just trying to eke out a living. It's a dog eat dog world, with Desert Punk having the biggest canines, a world where backstabbing is a way of life. Even in that context some of the character reversals are extreme. People you would have previously considered protagonists, even antiheroes turn into absolute scum of the earth in these episodes. These are characters that I previously invested in, and rooted for. Even the ambiguous ones switch from good guy ambiguous to bad guy ambiguous and vice versa, while those bad guys who suddenly do an about face and become protagonists… Well I didn't care about them in the first place, and I certainly don't care now that they are acting heroic. 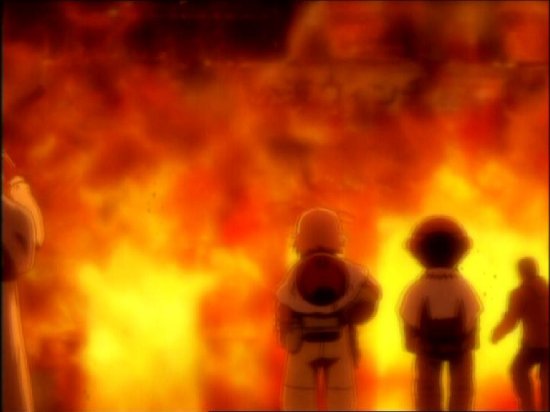 The other problem I had with the show was that for these final episodes, the humour was leeched out of them to such a degree that it was barely recognisable as the Desert Punk that I first encountered. It's as if the idea of a series conclusion implied that the story had suddenly become serious and realistic. It was never realistic. Desert Punk volumes 1-5 are absurd, slapstick and toilet comedy. You aren't supposed to delve too deeply into the politicking, or the dark conspiracies, or secret bases. They're just means to an end, that end being Kanta either humiliated by Junko, or Kanta humiliating some poor schmuck and leaving him naked, hopping about on the blazing hot sand. Frankly, I always thought of the Oasis government and the Reverse Handyman Group as background to the good stuff. Seeing it gradually come to the foreground has made the show gradually get more tedious, and that tedium peaks in the final two episodes here. 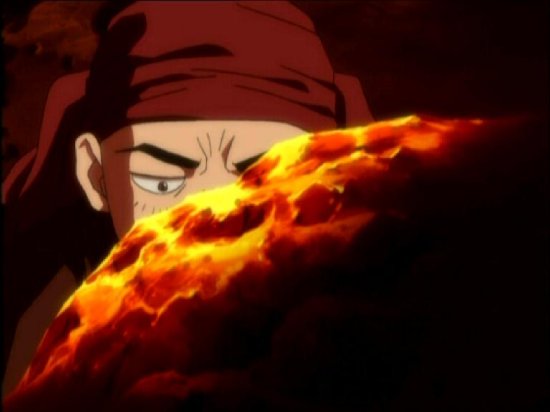 Desert Punk has been a fun little show, meaningless but entertaining. However, with this final volume, it's as if the makers went in search of meaning, and lost the fun in the process. If you are collecting the series, it's inevitable that you will buy this disc to round off the set. Nothing I can say at this point will dissuade you of that. In fact, if I were lacking the final disc, and even knowing what I know now, I would still buy it to complete the other five. It's a compulsive collectors' gene that cannot be denied. I can't guarantee that you will enjoy this disc though, so consider yourself suitably warned.