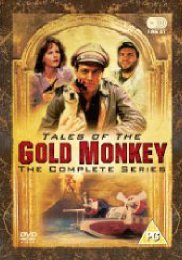 Article
They're back! Return of the Man from U.N.C.L.E.: The Fifteen Years Later Affair hits DVD in March

Tales of the Gold Monkey

It's 1982 and a couple of series appear on our TV screens centred on life in the late 1930's.  They're not inspired by, but nonetheless greenlit by, the success of Raiders of the Lost Ark.  One was the Bruce Boxleitner helmed Bring 'Em Back Alive, the other was Tales Of The Gold Monkey - originally presented to the ABC network in 1979 and turned down until they felt they needed a cash-in on the Harrison Ford vehicle.

Set in the Philippines in 1938, Tales of the Gold Monkey centres around the adventures of American expatriate Jake Cutter (Stephen Collins), a pilot for hire who only a year previously had fought for the Chinese against the Japanese air force as part of the Flying Tigers.  An ex-ace grounded from combat flying by the Tigers through injury, Cutter finds himself on the island of Boragora, ruled by the French and not too far from islands controlled by the Japanese. 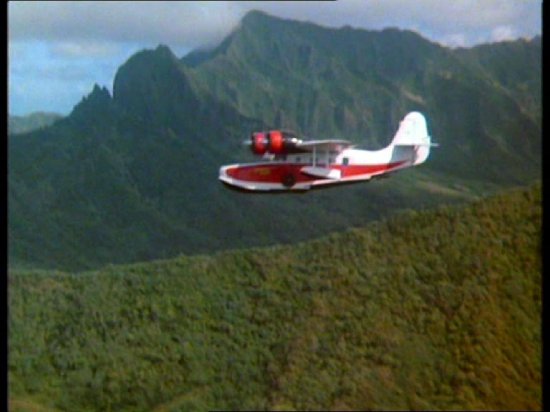 Aiding Jake in his adventures are Jack and Corky.  Jack is a one eyed Jack Russell dog who is Jake's constant companion despite never being able to forgive Cutter for losing his eye in a poker game.  Corky is Cutter's mechanic, an alcoholic who built Cutter's Goose (the Grumman Goose amphibious plane that Cutter flies) from a wreck the two found after Cutter was let loose by the Flying Tigers.

Cutter also has two good friends in Bon Chance Louie and Sarah Stickney-White.  Louie is an ex-criminal, currently the Magistrate du Justice and proprietor of the Monky Bar and Hotel.  Sarah is a US spy whose cover is as a singer in the Monkey Bar.  There's a chemistry between Cutter and Sarah, although Cutter still harbours feelings for an ex-love and therefore never crosses the line. 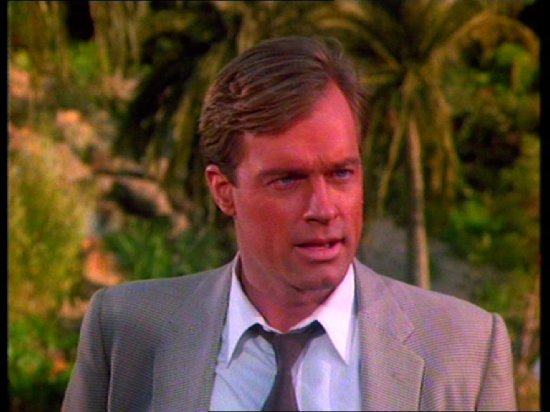 Also doing their bit to help out are two other accomplices.  Gushie (Lee Jankey) is Louie's right hand man, while Reverend Willi (John Calvin) is German (but no Nazi) spy with a cover as a Dutch preacher with a penchant for giving 'blessings' to the nubile and virginal island maidens.

On the Japanese side, and therefore supposedly the enemy, is Princess Koji (Marta DuBois) a half-Irish/half-Japanese member of the Japanese aristocracy who controls part of the Japanese side of the Philippines.  Koji has a soft spot for Cutter and more than often helps him out when he's in a bit of a spot.  Backing her up is Todo (John Fujioka), her Samurai bodyguard who is well hard but a little dim with it. 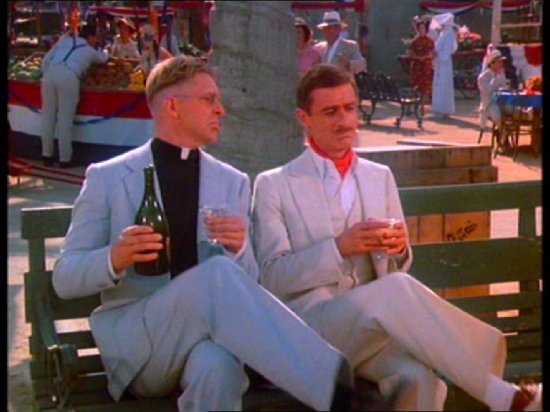 Picture is in pretty good nick considering its age, only real print damage is where stock footage is used.  Other than that, it looks rather superb in places with some real care shown on creating a 30's vibe to the series.

There are apparently 5 episode commentaries but I didn't see them on my excursion through the review discs.  There's also a 24 page detailed booklet on the series included, but sadly not with my discs.

The rest of the extras are text based and take you through a series synopsis, character biographies, cast biographies (sadly only Stephen Collins and Caitlin O'Heaney), some facts on the series and a stills gallery as well. 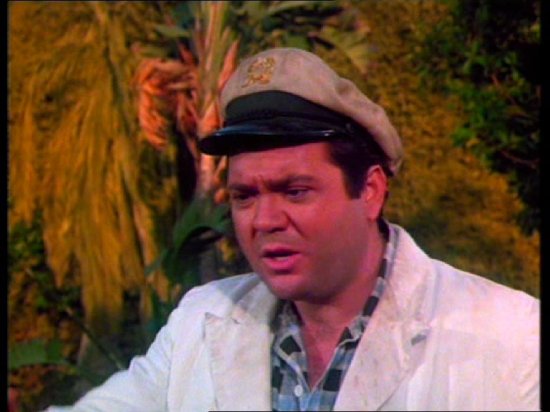 This series has a reputation of being a Raiders cash-in, but nothing could be further from the truth, for series creator Donald P.Bellisario anyway.  It is true that the studio green lit this project in the aftermath of the success of Raiders, but this series was first mooted in 1979 - a clear two years prior to the release of the Harrison Ford helmed flick.  The studio kind of got their way with the pilot which turned out to be a search for the Gold Monkey that became the title of the series but no more artefact driven stories came after this.

This was a fun tea-time serial that evoked the mystery and romanticism of the late 30's, a much simpler time and just prior to the major upheaval of World War II when just about everyone got on but there was mystery and intrigue abound as nations positioned themselves for what was to come the following year (or three in America's case…).  As befit series of the time, there was always the good girl assistant-type figure who never got close enough to the hero and a bad girl who lusted after him and felt obliged to help him whilst trying to seduce him across to the dark side where they have doughnuts (see Buck Rogers In The 25th Century for further evidence…).  Oh, and the bad girl also had a hard yet colourful and dopey bodyguard. 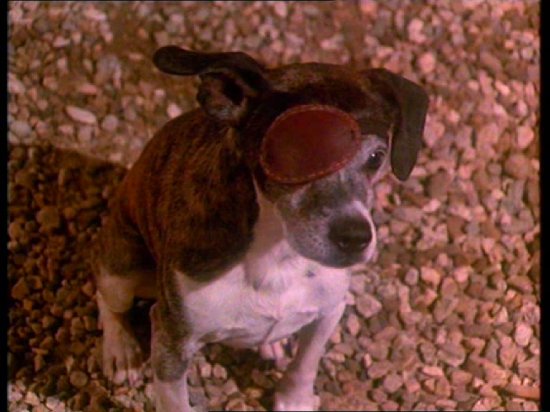 The cast was very much an ensemble piece, although not everyone appeared in every episode.  Roddy McDowall took over the role of Frenchman Bon Chance Louie from Ron Moody after the pilot, and I'd forgotten just how good Moody actually was, although in the long-term I agree with the decision to hire Roddy McDowall as he's such a great actor.  O'Heaney is a decent foil to Collins rough and ready hero, although she doesn't actually do much of the spying that is a major part of her character, she just seems to be about to pout and scream - not that this is a bad thing.  Comic relief is provided in turn by Jack the dog (who appears in the credits as a full cast member), mechanic Corky and superspy vicar Willi.  Despite him being a German spy, I did really like the gentle sleaziness of the pretend priest who despite being a spy, went on his very first secret mission in full German uniform - he never wore it again after the pilot though, so his cover was never broken. 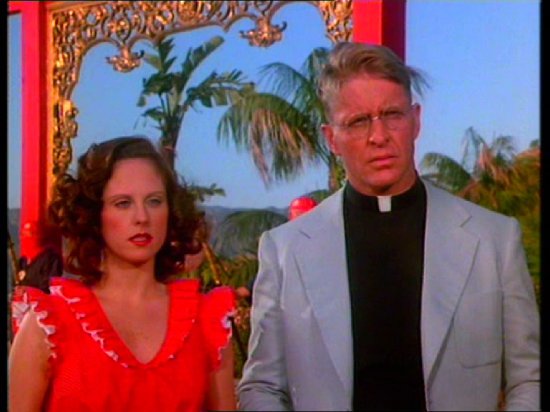 Despite being a rather formulaic series, this was and continues to be a lot of fun and I enjoyed my rather nostalgic view of nostalgia… 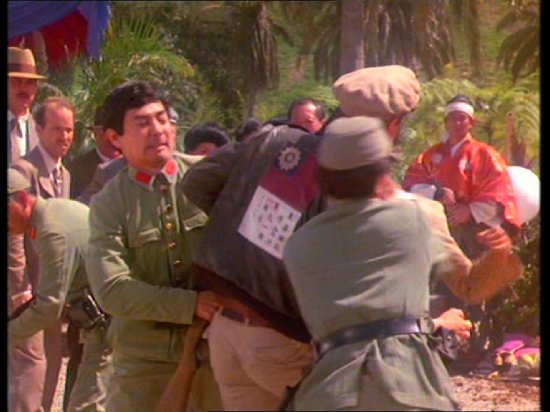