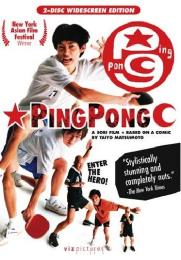 Article
Ichi out in August

Article
Why I Now Hate Seagate

You wouldn't expect it to happen in this globalised, information rich world, but you can still watch a movie on television, enjoy it, be thrilled by it, and then the next day quickly trawl through the online retailers, only to find it hasn't been released on DVD yet. It's not so much a problem with the mainstream Hollywood back catalogue, although Monte Carlo Or Bust still remains criminally absent from Region 2 shelves, rather it's the niche titles, the cult movies, the forgotten classics and most of all foreign cinema that remains under represented on UK shelves. It's been about five years since I first saw Ping Pong on a late night BBC4 broadcast, and I thank my lucky stars that had the presence of mind to put a video in the machine that night. For, try as I might to locate one the next day, a UK Region 2 disc of the film just wasn't forthcoming. One did turn up eventually in 2005, but a barebones disc with burnt in subtitles isn't that much of a promotion from a videotape recording of a TV broadcast. It's worth being patient though, as finally in 2007 a decent two-disc release of the film made its debut. The downside being that it is a Region 1 release. When I were a lad, there were 2 dollars to the pound, and buying this was like buying a budget DVD. With the way currencies are now, it may be worth going for the identical Region 4 release, which will probably be a PAL disc as well. Ping Pong is a live action adaptation of Taiyo Matsumoto's (Tekkonkinkreet) manga of the same name. It's directed by Fumihiko Sori, who later went on to direct Vexille, and it also happens to be one of my favourite films of all time. 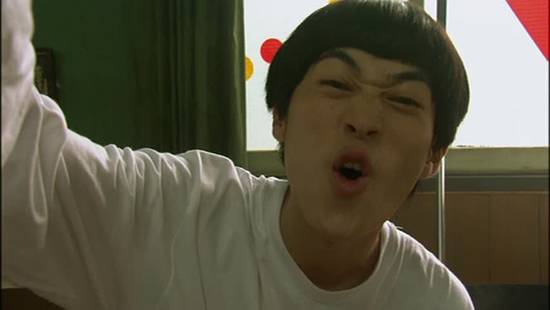 Ping Pong tells the story of two friends, 'Peco' Hoshino, and 'Smile' Tsukimoto, who have been best friends ever since Peco rescued Smile from a gang of bullies. Their friendship grew around a mutual appreciation of table tennis, and both of them have a heap load of natural talent. In a school that revolves around table tennis and the annual inter-High School tournaments, that is a big deal. But their personalities couldn't be more different. Peco is brash, cocky and reckless, eschewing practice and hard work, confident in the belief that his natural talent alone is enough to make him world champion, and hustling his way up the ranks at Grandma Tamura's table tennis dojo. He's not the perfect player for coach Butterfly Joe, who works with the school table tennis club, and who sees Smile as his ideal player, more amenable to training and discipline. But Smile is sullen, withdrawn and apathetic (he got the nickname Smile because it's something he never does), and he lacks motivation, despite his considerable talent, and he doesn't use the killer instinct in his matches. Peco looks forward to the next tournament as his way onto the national team, while Smile couldn't care less. The man to beat is Dragon of Kaio High School, the best player around, for whom table tennis is a personal battle. But before they can play him, they have the preliminary rounds to negotiate. In a final effort to motivate his star player who looks on the verge of quitting, Joe bets Smile that he will lose, the forfeit being he will surrender to his coaching techniques thereafter, while Peco thinks he has an easy match when he faces Demon, a friend from childhood who now trains with Dragon, but who lacks natural talent. Then it all falls apart. 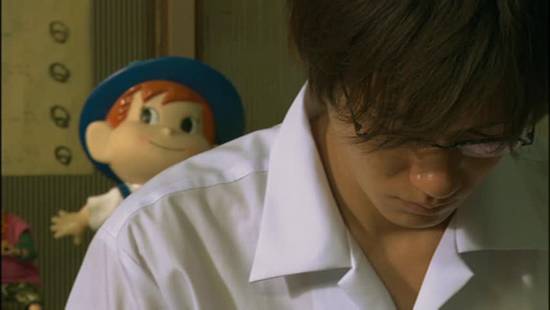 This being a Region 1 disc, you won't be surprised at the NTSC transfer, and the 1.85:1 anamorphic picture passes muster, presenting the film clearly, without any print damage and with a well-defined image. However, the colours are over-saturated, especially the reds, requiring a little adjustment to the television to get the best out of it. I also felt that the image was a little flat, lacking in depth and dimension at times. Most annoying of all was a persistent skew in the top of the image (probably the few lines that wouldn't be visible on an NTSC set). It's a little disappointing, as the film has some great cinematography and amazing effects work that really ought to be seen at its best. 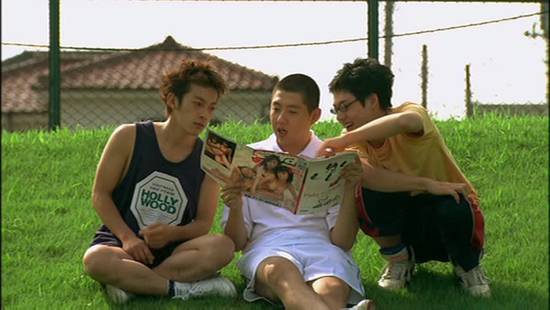 You have a choice between DD 5.1 and DD 2.0 Japanese, along with optional English subtitles. The dialogue is clear, and the film's j-pop soundtrack comes across strongly enough. The surround is definitely the way to go, as it comes alive during the table tennis matches, offering a Matrix-esque audio experience. The only quibble is the absolutely horrendous subtitle font. Mustard yellow is definitely not the ideal way to enjoy live action, but it must be Viz' experience with anime affecting this disc, as yellow fonts are ideally suited for television anime. 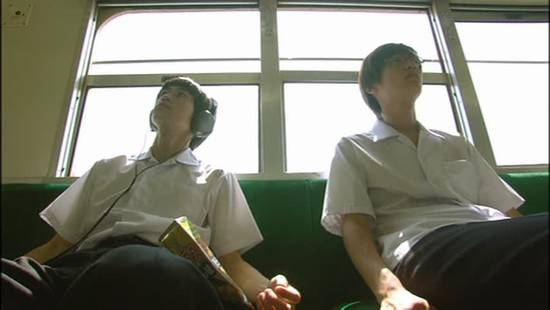 Both discs get animated menus based on a Ping Pong theme.

Disc 1 offers the text biographies for the Director and Cast, as well as trailers for The Taste Of Tea, Train Man: Densha Otoko, Linda Linda Linda, and Kamikaze Girls. Note: Kamikaze Girls comes out in the UK this coming January.

The most substantial contribution is the 54-minute making of featurette, which takes us from incept to completion, with input from the cast and crew. It's interesting to hear that playing table tennis without a ball is harder than you'd think, especially if you have to CG one in later and make it look real. 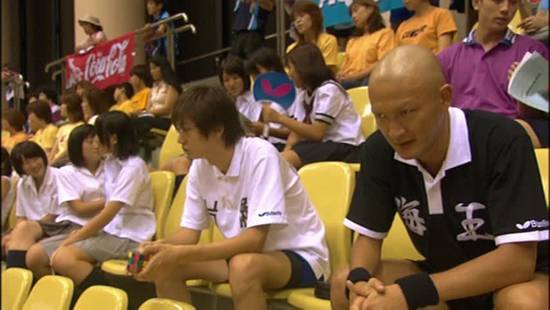 Ting Pong is a 15-minute parody, which gives Captain Ota his moment in the light. It turns out that Smile has a female admirer, and she wants Ota to deliver a confessional letter to him. The letter gets diverted on the way. This is presented in letterbox format.

How To Play Ping Pong offers 16 minutes of instructional material. There's a look at the game and how it's played quite obviously, but there is also a look at styles of play and how they applied to the characters in the film. There's also a detailed description of 'getting skunked'.

Finally there are three TV spots and the film's teaser trailer. 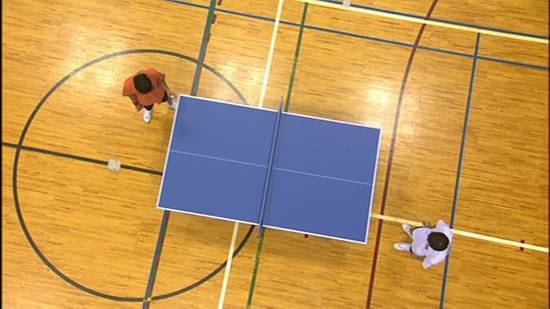 You can forget the Rocky movies, and Chariots Of Fire, or all those other 'against all odds' sports movies; Ping Pong is the perfect sports flick. In fact it transcends its genre, it's the Zen of Ping Pong, a meditative insight into human nature that stays with you long after the end credits have rolled, where the trials and travails of life, interpersonal conflicts and inner demons are all battled around a blue table, with a small plastic ball and two wooden bats coated with rubber as the weapons. It's terribly good fun too. 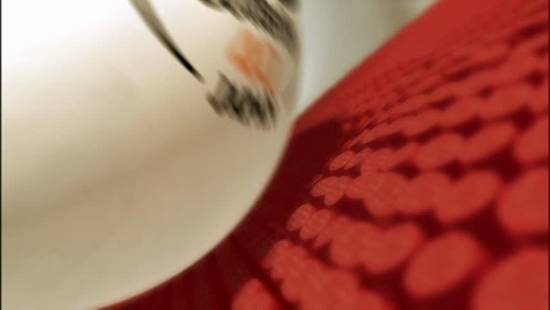 It follows the structure of a classic sports movie, with a major event for the protagonists to aim for, and a series of obstacles and life issues to resolve before getting there. Here it isn't the prestige of a world title, rather the down-to-earth annual inter-High School table tennis tournament, which for those who succeed could prove to be the first step in a new life. It may be smaller scale and less spectacular than a major competition, but it helps draw the viewer into the characters, as it's certainly more personal and immediate. 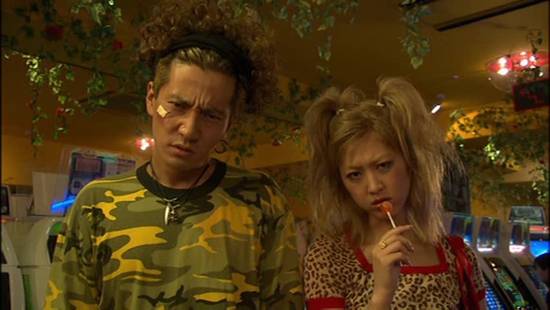 The characters are what most enrich this film, and make it such a joy to watch. Normally in the average sports film, you have your protagonist and a whole heap of antagonists and adversity to defeat before they can achieve glory. Ping Pong is refreshingly absent of any villain, and instead offers five very diverse characters that are aiming for the same goal, and all have redeeming features and flaws to empathise with. Peco is the hero of the film, at least he is the character that you would most likely root for alongside his best friend Smile, but the burden of heroism is one that he would rather not shoulder. But as he dreams of stardom and climbing to the top of his sport, he has to learn that living up to other people's expectations is part of the job. Smile on the other hand is all too ready to shoulder that burden, and he's been living with other people's expectations ever since he started playing the game and realised he had natural talent. The trouble is that he plays table tennis for the sake of something to do, he lacks ambition and the will to win, which infuriates his coach no end. 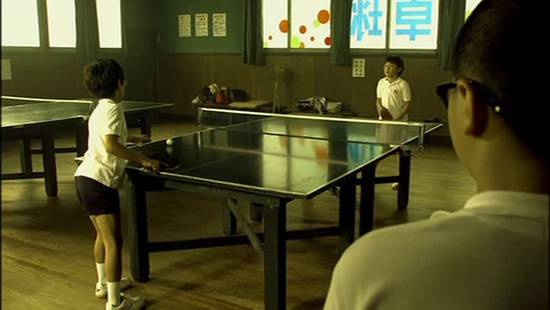 There are three characters whom you would normally take to be antagonists, but each have a depth beyond that. Demon is a childhood friend of Peco and Smile who went to a rival high school. He's worked hard at his game, trained constantly and is technically proficient. Naturally his attention turns to his old friends as rivals, but he's yet to learn that all the training in the world isn't enough without talent. China (imaginative nickname!) is a Chinese player who after failing to make his national team has come to Japan to reinvent his game. He outclasses most opponents that he plays, but he's always looking for a worthy adversary. But this is his last chance to gain standing before the sport leaves him behind. Finally there is Dragon, the man to beat. He embodies a combination of talent and determination, is brutal and merciless when he plays, and brooks no grandstanding or showboating. He trains relentlessly, seems to embody rage in his playing style, but only because he has no one to truly compete against but himself. 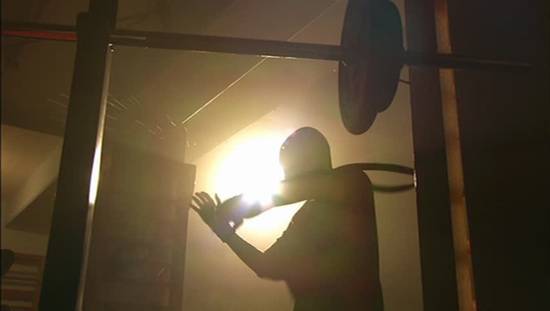 Smile's coach, and the coach of the school club is Butterfly Joe, who sees in Smile a potential champion, and as a consequence pushes him beyond breaking point. Of course he has transference issues, and his own past in the game is the cause of the pressure he puts on his star player. Then there is Grandma Tamura, Peco's own sponsor and the closest thing to Yoda there is in table tennis. All these characters could very easily have been archetypes of the genre, but thoughtful casting and sensitive performances leave all that behind, offering something fresh and interesting. Mari Natsuki who plays Grandma won a Japanese Academy award for the role. 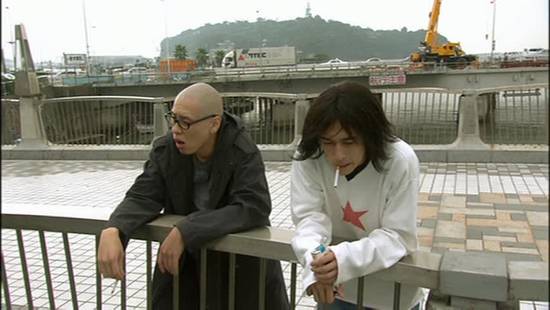 Of course the film would be nothing without the effects. Ping Pong does offer a Matrix meets table tennis experience at times, with multiple camera angles and occasional moments of absolute surrealism contributing to that Zen aspect of the film. But then again it also has the best possible use of CG in cinema, that which is invisible. I think the number of world-class table tennis players who can also act populate a miniscule Venn diagram subset. This film manages by training the actors to accurately portray a style and energy, and then carefully choreograph a rally from beginning to end. The balls were then added later in postproduction. The thing is that you would be hard pressed to tell which moments were enhanced and which were real. 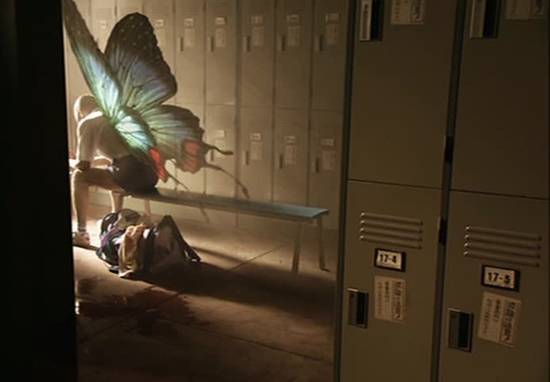 It goes without saying that I love Ping Pong; it's a sports movie that transcends sport. A complete novice could come to this movie and fall in love with it. And if a couch potato like me could love it, then this should truly appeal to as broad an audience as possible. In fact I can only see one problem with this film. After watching it, you may be tempted to play a couple of games for yourself. Don't be surprised if Nirvana eludes you.