Article
The Sanctimonious Self Righteous Tossers of the Internets

Article
The PR Company's Love Affair with the PDF

Article
If The Shoe Fits... The Odd World of Internet Sources

Why I Now Hate Seagate

This is a shame, we've had such a wonderful relationship for the last few years. All my drives have been Seagate, usually Barracudas, all worked pretty well without issue. Then I got one die on me, which isn't an unusual experience when you have spent a lot of years working with a lot of computer systems.

But all of that is okay, they have a 3 year warranty, yes you have to pay the £5 to send it their way but the rest is dealt with swiftly by them. Unfortunately that is where the niceness ends, because you don't get a new drive back for your hassle, oh no, you get a second hand "Certified Repaired HDD" in the post. In my case, one with a load of scratches over it, which hints that perhaps it hasn't been as well treated as it should have been.

The problem with this policy is obvious to anyone but clearly Seagate. Of all the things you trust inside your PC, the thing that holds the most of your precious data is the one you trust the most. Now I have a decent backup system, but that is all it is. I don't run RAID because in my experience it might save you data, but mostly it just wears out two HDDs in the time you'd usually wear out one.

So I accept the fact that occasionally I might lose some work I did between the automated nightly backups that take place, and when I've done something particularly important I make sure it exists off-site as well. Just in case of a fire, flood, tornado or something. 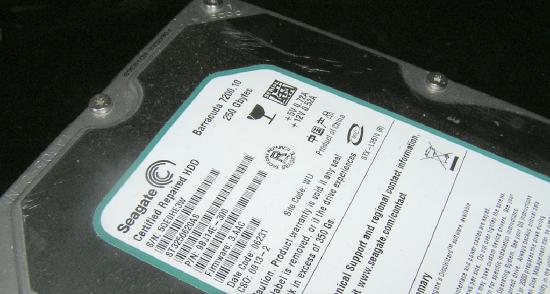 What I do not accept, is losing some work because a HDD dies, returning that HDD and getting a so called repaired one in its place. Already my trust alarm bells are going off, and I really feel I need to trust my PC not to lose my data. But hay, they say this is a refurbished drive, it should be fine, right?

Well no it wasn't, it went bad within 2 months. Yes you read that right, two sodding months, and it took whatever I'd been working on that day with it. And do you know what they said when I submitted a ticket? Yes you guessed it, they were so very sorry that this happened, but no I wouldn't get a new drive in return, I'd get another repaired unit.

So I now hate Seagate, and I hate them because clearly they do not care about me losing data. They care more about their profits, which is a stupid thing to do in the market they are in. If your product loses data when it's very job is to retain it, that is bad luck. When you are attempting to repair faulty products and failing, and then sending these out to people who have already suffered from your faulty products, you are only going to lose customers.

From now on I'll not be buying Seagate, this bias created by a bad warranty policy from the company themselves is purely to blame. People in this industry have very long memories, I still do not buy Hitachi drives, because they bought the business from IBM. As anyone will tell you, this business was doing great until the terrible disaster of the IBM Deskstar drive.

I had one of those too, it got the click of death, went all the way around the world to be repaired, came back still clicking and eventually completely dying. I know from first hand why these were nicknamed Deathstars, it is a memory that still lingers and will for a long time. You'd have thought Seagate would have learnt from that, especially when they recently had such a public failure caused by firmware bugs in the Barracuda 7200.11 unit.

But the obvious answer is no, and judging by their revenues falling by $496m recently, perhaps I'm not the only one who has decided to avoid them.

If you don't play World of Warcraft, skip this bit. If you do, last night I finally released the complete rewrite (it took many weeks, far too many hours) of my damage meters add-on MinnaStats. When Blizzard redesigned the combat log, it really screwed the original version over. I'd designed it completely for the way the old one worked, to be as fast as possible in deciphering it, and they changed it the buggers!

The new combat log system (now very mature) is excellent and much faster to process, but you can't take a motor car and patch it up for running on railways and expect it to do what it managed on tarmac. Plus the old version had fixed size windows, and to fix that required either more botch jobs or just start again from scratch. Which is what I did.

I also simplified the interface a lot, for all the people who can't work out you could right click things as well as left. And I got it tracking everything possible, whilst leaving the door open for future expansion.

For later versions I'll add a few UI tweaks, the ability to save and load entire combat records (say you want to keep last week's Naxx run but still start this week with a clean empty list), plus a full analysis centre which will let you narrow down stats to specific spells and targets. Say you wanted to see the crit percentage for all the fire spells cast against a particular boss, you should be able to do this in a later version, at least that's my aim.

Of course that will increase the cpu load, so I'll also be adding the facility to specify how much you want to track. An economy mode if you like, for those with slower systems.

Videos Worth a Watch

Sometimes the funniest things aren't planned, but sometimes they are. Occasionally everyone in a funny bit of film can be in on it, but often it is best when only a few are. Enter this first video of the day, an over-celebration from winning a game of Table Tennis. This guy has the moves baby!

And next, because you don't have to truly admire the sheer time and effort that went into it, or even have played the game to enjoy it, this wonderful mix of song (Queen's Don't Stop Me Now) and video (clips from Super Mario Galaxy), a Nintendo Wii piece.

Having completed the game... well actually that isn't true. I got every single star on every single level, saw the nice end credits, and then found out the game suggested I did the entire thing all over again as Luigi, just to see an extra bit of video I could have (and did) watch on YouTube.

Where was I? Oh yes. Having completed the game, and liking the odd bit of Queen (you can make of that what you will), this reminded me of how wonderful it was (see previous comment) and almost made me decide to go back and finish it all off as the other character. Maybe one day, it really was the most enjoyable Mario experience ever... but not now.