Blu-ray
Quatermass and the Pit

Article
The Internet is Wrong - Volume 3

Article
Why Do Studios Still Treat Reviewers As Potential Pirates?

If The Shoe Fits... The Odd World of Internet Sources

This is something I often don't get about The Internet. When people write a news piece or blog entry about something, they cite the source they got it from, and most of the time only that source. The thing is, that is rarely the original source which often doesn't get all the credit it deserves.

A few at least attempt to credit where the information or image first appeared, but even then they very rarely actually link to the true originating website. All of which makes me wonder, why do they bother at all?

As an example, we start with Twitter, or was it Facebook? Or perhaps it was something else entirely? But it links to an amazing never released shoe design by Alexander McQueen, inspired by HR Giger, on the site BoingBoing.net, and it is here our adventure begins. 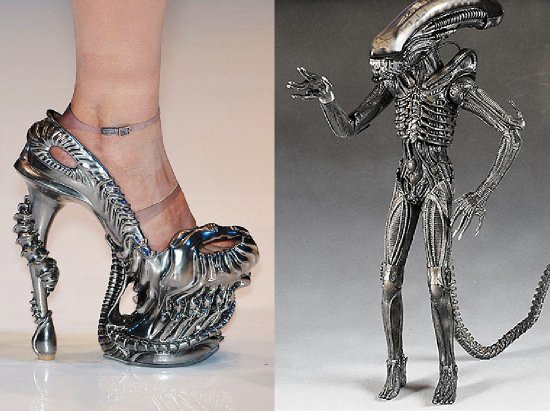 Alien/Giger Heels is the heading, the picture above is present along with a short descriptive paragraph and two links, the first to GeeksAreSexy.net, which has a very similarly small description below the picture, and the other states it came via Geekologie.com.

But this is far from the end source, as GeeksAreSexy link the pic as coming via SFX.co.uk, which includes it along with a slightly longer bit of info about where they got it from.

And that was Neatorama.com, which returns us to the small paragraph of information, and then links to a site called Great White Snark as it's source. Surely we are close to the end here now?

No, not quite, Great White Snark cite Star Wars and Wine as the place they got it from, who in turn cite WickedHalo, a place that has by far the longest most detailed description of information about this and other catwalk designs along with their inspirations.

Now, whilst obviously this site is not the technical original of this image, it is quite clearly the original Internet source that everybody should have linked to, but only one person did. From this one blog post came a huge chain of links, all claiming the previous website was the source, when from a little bit of checking, anyone can see it really isn't.

For things like Google, this matters, this is important semantics. When you search for some variation of "alexander mcqueen alien shoes", you don't get the website which has not only the original image everyone else (including us) borrowed, but also a lot of other relevant interesting information. What you do get is some of the other ones I mentioned here, and that isn't good for the Internet or its users.

We shouldn't be hearing things third, forth or in this case seventh hand, when we could be taken straight to the horses mouth and decide for ourselves. In the case above, all we lose out on is a collection of additional images that are culturally enriching. In others, we will end up with a coloured, watered down, distorted view of things, manipulated by ignorance, laziness and in some cases (yes Daily Mail and Fox News, I'm talking to you here) downright insidiousness.

This is becoming a real source of frustration for hard-working journalists who becoming increasingly annoyed with the lazy variety. The way you describe it is almost like a diluting/watering down of the credibility of a piece a link at a time...surely not a good thing. This is the first time I have seen this gripe articulated so clearly. It will undoubtedly get picked up by some young hack who may credit the observation initially, whose work will then get picked up and credited elsewhere and before long any claim to it you had will be long gone!! A fascinating world we live in!!
posted by Stuart McLean on 6/4/2012 11:01