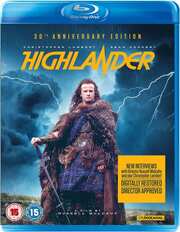 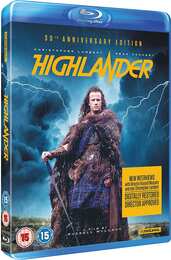 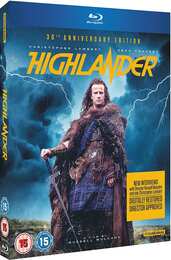 One of the annoyances of double-dipping classic movies to HD is ill-timed release announcements. I reviewed the lacklustre Immortal edition in 2015, and a few months after that, Studiocanal announced a 4k restoration. The Blu-ray based on that restoration came out a year later, but I’ve waited this long to re-watch the film to review the newer release. I still like Highlander enough to keep on upgrading to a better version. For the last couple of years, a UHD of Highlander has been rumoured to be imminent. Now that I’ve reviewed the 30th Anniversary Blu-ray, a UHD announcement will happen. That kind of annoying timing is practically natural law by this point. 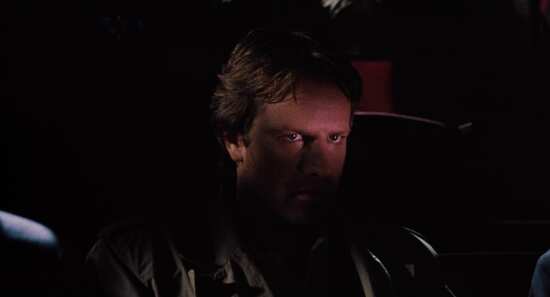 Russell Nash is a New York antique dealer with a difference. He was born 400 years ago in the Highlands of Scotland as Connor MacLeod and he is different from most men. He was mortally wounded in battle with a rival clan, yet when he didn`t die of his wounds, his clan cast him out as evil. He had to wait for the arrival of Juan Sanchez Villa-Lobos Ramirez to learn of his true potential. As passed down since time immemorial, they and a select few individuals are immortal, destined to live through the ages and battle for the prize. The only way that they can die is through decapitation, when the victor will claim the loser`s Quickening. Legends foretell of a Gathering in a distant land, where the few survivors will meet and fight to the last, the victor will have control over the destiny of man. 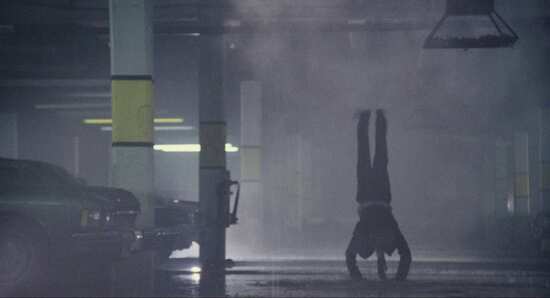 In New York of 1985, the police are baffled by a spate of decapitation murders and when they capture Nash fleeing from the scene of a killing they assume they have the culprit. But Nash is a cool customer and gives nothing away, and lacking evidence they let him go. However, forensic consultant Brenda Wyatt is tantalised by evidence of the sword used in the crime, a sword that by all rights shouldn`t exist, and she pursues Nash on her own initiative to learn the truth. The truth that she uncovers is beyond her wildest imaginings though and soon she is caught in the middle of a titanic battle for the future of mankind. For Victor Kurgan has pursued MacLeod down the centuries and is the strongest of all immortals. If he would win the prize, mankind would suffer an eternity of darkness, and in New York only two immortals survive but "there can be only one". 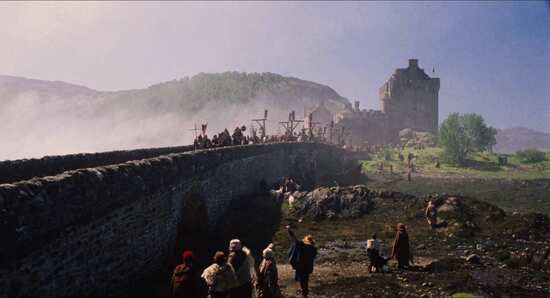 Highlander 30th Anniversary gives the film the presentation it always deserved. The Immortal Edition that preceded it felt like a glorified DVD, but this is proper HD as you would expect. The disc presents the film with a 1.85:1 widescreen 1080p transfer, and the choice between DTS-HD MA 5.1 Surround English and German, as well as DTS-HD MA 2.0 Stereo English, with the choice of English and German subtitles. The image is a spectacular improvement over the previous release, clear and sharp, and delightfully colourful. Compared to the relative monochrome of the Immortal Edition, colours are rich and bright here, the grass in Scotland is finally green, and Ramirez really does look like a peacock. The detail levels are excellent, with Ramirez’ costume particularly striking, including those peacock feathers. The film has a natural level of grain, strong contrast, and good dark detail. This is as good as it gets, but that does mean that the flaws are apparent as well, the less than stellar eighties film stock, the seams in prosthetics, an obviously polystyrene door kicked through by the Kurgan, and of course those infamous wires during the Quickening. The audio defaults to the stereo track, authentic to the original theatrical experience, and that is the right choice. Just like on the previous release, the surround track is overcooked, with the LFE sounding particularly forced. At least this time the stereo track is full bitrate, as opposed to the half strength 2.0 on the previous disc. That gives you that Queen/Michael Kamen music in all its eighties glory. 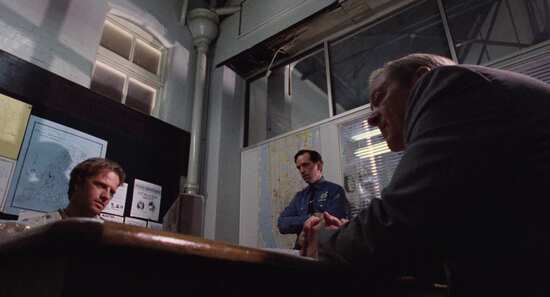 You get one disc in a BD Amaray style case, with the disc booting to a choice of German or English animated menus. Many of the extras are carried over from the previous disc, but there are a couple of new featurettes. 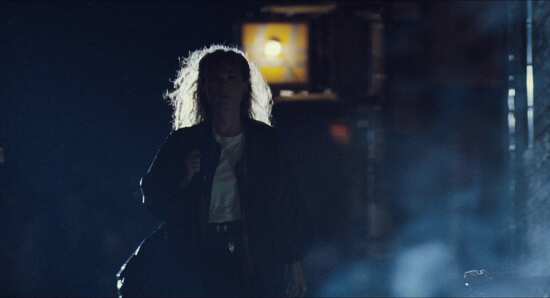 The Interview with Director Russell Mulcahy lasts 22:06.
The Interview with Christopher Lambert lasts 19:44.
The Making of Highlander lasts 115:41. Three of the four parts were on the previous release, A Legend is Born, The Visual Style, and A Strong Woman, but the final part, The Producer’s Point of View is new to this disc. 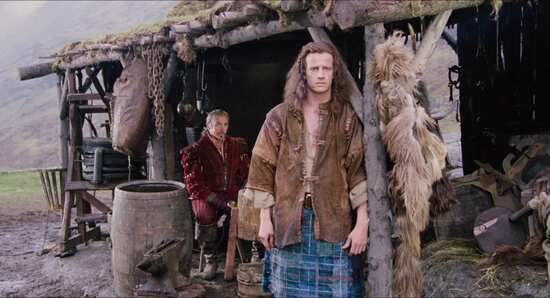 The audio commentary with Russell Mulcahy is brought over from the previous release, as are the following extras.
The Deleted Scenes lasts 6:13.
Archival Interview with Christopher Lambert lasts 8:32.
The Trailer lasts 2:31. 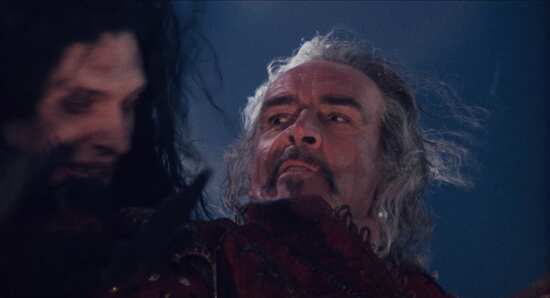 Before I turned my attention to Highlander’s 30th Anniversary Blu-ray, I pulled out the sequels to get me into the mood, although those VHS rips are hardly Blu-ray quality. After Highlander II: The Quickening, and Highlander III: The Sorcerer, I thought I had made a mistake. Those sequels really do suck, with the second going off on a weird alien trip to justify bringing Sean Connery back, while the third film was such a cynical and heartless remake of the first film that it might just well have been a parody. But last night, watching the original Highlander again, I had a grin on my face in a way that I haven’t had for years, certainly not the last time I watched the film. I felt like I was a teenager again, watching the cult classic that we all fell in love with on VHS. I must have been having a bad day the last time I watched this film. 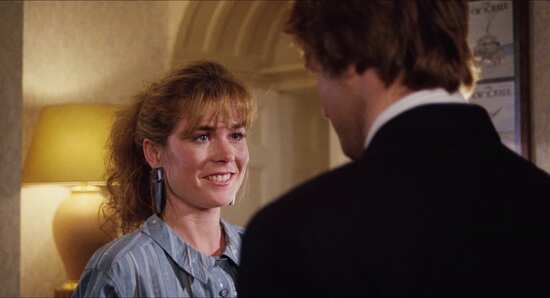 There’s something about the juxtaposition of epic fantasy in contemporary times that really appeals to me, the idea of a secret, underground world existing alongside our own. There’s also the romantic vision of immortality as both a blessing and a curse, the idea of people living today who have also lived through grand historical times. There’s something about history that is abstract when it comes from the history book and classroom lessons. In a sense history as a living, breathing set of events ceases to exist when those that experienced them directly pass on, but in Highlander those events still remain alive. It’s one of the strongest aspects of the first film that really works, but which became gimmicky in the sequels and the television series. But then again, the appeal of the film could just boil down to epic sword fights in Manhattan! 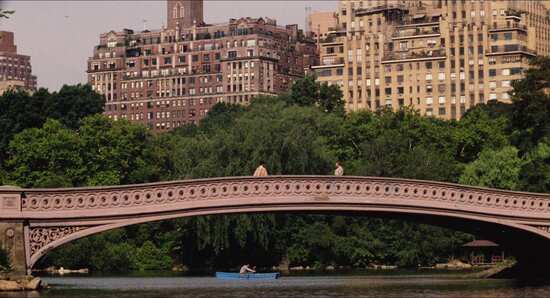 I think lightning struck for Russell Mulcahy with the original Highlander. The story, the cast, the music, the flashy and fast pop music direction and editing really did deliver an immortal cult classic, pun intended. You know that you’re part of an exclusive club when certain critics and listings magazines still don’t get the movie 35 years after its release. If I had a penny for every time I had seen Highlander described as a time travel movie, I’d have a lot of copper. 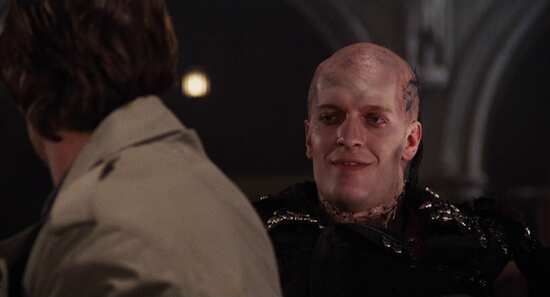 The previous Blu-ray release of Highlander, the so called Immortal Edition was a complete let down of a release; a marginal improvement over the DVD at best. This 30th Anniversary release offers the film as it should have been in the first place. The stereo audio is excellent, while the 4k restoration is sympathetically presented on this disc, delivering a wonderful filmic experience. I certainly wasn’t distracted by the weakness of the transfer, and instead could devote my full attention to the film instead, and it worked its magic on me once more. This is the version to own.

I've been looking at the comparison on Caps-A-Holic which shows the Director's Cut version as looking even better, which makes me wonder how bad my Immortal Version that I've not watch yet looks :(