Review of Highlander
added by
Jitendar Canth
Places to Buy 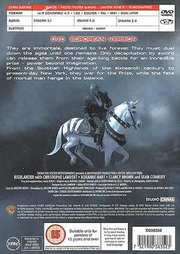 Back Cover of Highlander 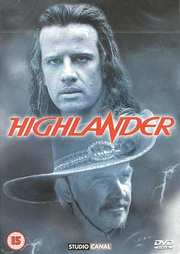 Synopsis:
The year is 1536. Scottish Clansman Connor MacLeod (Christopher Lambert) is mortally wounded in battle by a terrifying warrior - The Kurgan (Clancy Brown). When his wounds miraculously heal, Connor is cast out by the superstitious villagers to live a life of solitude.

Several years later Juan Sanchez Villa-Lobos Ramirez (Sean Connery) a nobleman of Egyptian / Spanish descent teaches him that like he and the Kurgan, MacLeod is an immortal who can only die by decapitation. He tells how the immortals are fated to duel down the ages to a mysterious distant time called `The Gathering`, when the last few will battle for `The Prize`.

So begins a romantic action-packed saga spanning four centuries to modern day Manhattan where a reign of terror grips the city and headless corpses baffle the police. The Kurgan has arrived in town as a one-man wrecking crew maddened by aeons of blood lust, slaughtering everything in his path searching for his ancient enemy - the Highlander.

It all comes to a climax with an earth-shattering showdown between to two old foes against the spectacular New York night sky - There can be only one.

Highlander is a cult film in every way. It has a very solid following and an equal amount of detractors. The direction is flashy and the soundtrack is 80`s rock at it`s best (courtesy of Queen).

So, how does it measure up in 2001?, really rather well actually!. The camerawork is just as fresh and fitting as it was back then, and the casting (although still baffling) seems easier to swallow. Lambert`s subsequent ventures show that this is the perfect role for him and one he will, sadly, never surpass.

I was very reluctant to buy this after owning the disgraceful R1 edition, which had terrible grain all over the picture and an over-elaborate soundtrack from THX (smashed windscreens sounding like explosions!). Happily I can report that all is well with this disc, the picture is the best possible transfer for the film and the sound is much more faithful to the original recording (5.1 too). Don`t get me wrong, the audio certainly isn`t demonstration quality, but It`s preferable to the constant whizzing & banging of the R1 release. In a perfect world they`d supply both soundtracks so the consumer can make their own mind up, if you wait for the Anchor-Bay release you just might get this choice. This UK R2 is the best option at the moment though and we should be thankful that it`s been encoded without the image flaws of the R1.

They`ve added a great interview with Lambert (in french) to this version which is anamorphic like the main feature. Some effort has gone into the "introduction" too, which is a brief collection of clips accompanied by techno-lite music (I liked it anyway!).

Basically, if you`re a fan of engaging fantasy movies and can forgive it`s flaws, Highlander is a superb buy. Don`t get any of the sequels though, because they are all lamentable and taint the image of this fine production.
posted by Tony Vado on 4/4/2001 06:05
8 / 10

One of the best films ever made (well, I think so). I was rather upset to see some of the sequels released first, as they are dreadful in comparison.

This disc worth getting simply because of the film. The extras are limited and the sound, I found to be below average - even for a film of this age it was poor. So poor in fact, that I turned off my Dolby 5.1 system and played it through the TV.

NOTE: I`m gonna break a rule or two here by reviewing the region 1 Anchor Bay release: "HIGHLANDER: THE IMMORTAL EDITION", in the hope that you will disregard the region 2 platter for it`s greater American relation! Get more bang for your buck, folks!

Russell Mulcahy`s hugely popular fantasy epic is back in a digitally remastered offering that proves, beyond question, that you can`t keep a cult legend down!

Often imitated, and regularly disgraced by an ever growing line of lesser sequels, "Highlander", for the few of you out there who are not in the know, follows a mysterious band of swordsmen, immortal save for a decapitation, who must battle down the ages from Sixteenth Century Scotland to New York in the (then) present day (1985) until only one remains, the victor receiving a power that transcends man`s wildest dreams.

Based on the screenplay "Shadow Clan" by (then) film student Gregory Widen, the movie was quite limply released to cinemas in the latter half of 1986, going largely unnoticed until it`s spectacular resurrection in the home video market some months later, where it garnered a heady (no pun intended!) combination of enthusiastic public reaction and soaring sell-thru figures!

Years pass, beauty fades, but pure genius endures, and this visceral treat is no exception! From the opening power chord of the unforgettable Queen soundtrack through to the very last frame, the movie hits you with a power that is as confident and exciting today as it ever was. Granted, this isn`t ideal entertainment for the Merchant-Ivory demographic, but if it`s a straight-to-the-heart shot of pure MTV-inspired adrenaline you`re after, then you could do one hell of a lot worse! There`s even an ultimately doomed love story in the mix for the lovely ladies and their handkerchiefs!

A bone of contention that will always damage the credibility of any art created in the 1980`s is that of it`s being a product of the decade that taste forgot, and "Highlander" does, I`m afraid, fall victim to an excessive inclusion of peroxide hairstyles and polished leather, but, in it`s defence, the plot`s more contemporary scenes are referred to as taking place in that very time, so overlook the flaw, and keep telling yourself: "It`s historical!"

On a technical level, the disc is as near matchless as it`s programme material, with a THX Certified 1.85:1 anamorphic presentation of the feature that is imbued with such realism and colour that you can almost smell the heather on the breeze. The soundtrack has been given an equally impressive dust off, and is available in both Dolby Digital 6.1, and DTS-ES (the latter of the two is an absolute benchmark).

On the extras front, we`re given a fun but informative commentary track from the show`s director and producers, two theatrical trailers (can anybody spot the spelling mistake in the totally wicked teaser ad?), talent bios and a terrific stills gallery.

"Highlander" is, to quote the late, great Freddie Mercury: "A Kind Of Magic!"

a man living in scotland who cant be kiled goes to new york and kils the kragen good fighting seens
posted by black_chuck on 4/3/2003 12:23