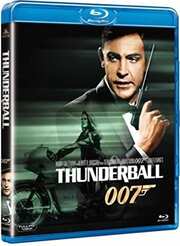 DVD
From Russia With Love: Special Edition (James Bond) (US)

A few years ago, I reviewed a childhood favourite of mine and found it lacking. That film was Raise the Titanic, which I thought was two hours of endless tedium, thanks to long, ponderous underwater sequences, punctuated by the long, ponderous music of James Barry, a cure for insomnia if ever there was one. You may be wondering what that has to do with the fourth James Bond movie, Thunderball, but when you hear that almost a quarter of the runtime of the film takes place underwater (according to one of the extras on the disc), and John Barry composed the music for the film, you can understand my trepidation at taking on this particular Bond movie. As it was, I only slept through one bit of the film, which when you consider it took me two nights and a day to forge my way through Raise the Titanic, is probably an endorsement of sorts? Thunderball also holds the unique status as the only Bond movie to be remade, thanks to the legal wrangling over who owned the rights to the original script. Somehow, Never Say Never Again has never made it into any official Bond Blu-ray or DVD collections.

S.P.E.C.T.R.E. have a new plan. They intend to steal a couple of nuclear bombs and hold NATO to ransom for (hold pinky finger to corner of mouth) £100 million. It’s sheer serendipity that James Bond is at a health spa near an air base where there are some odd shenanigans happening at night (aside from his usual shenanigans with one of the nurses). It’s his solitary lead to the hijacking of a Vulcan Bomber and the theft of the weapons. The sister of an observer on that doomed flight is ‘niece’ to the wealthy Largo, who is currently in Nassau in the Caribbean. And Largo wears an eye-patch, and has a swimming pool full of sharks. He can’t be up to any good.

With Thunderball, The James Bond series went full on widescreen, and that’s represented with the 2.35:1 widescreen 1080p transfer on this disc. You have the choice between DTS-HD MA 5.1 Surround English, DTS 5.1 Surround German and French, and DD 5.1 Surround Spanish and Portuguese, with subtitles in these languages and Danish, Dutch, Finnish, Norwegian and Swedish. You get the Lowry restoration again, and Thunderball looks pretty good when it comes to colour and detail on this disc. You have the typical, bright Technicolor film stock of the mid-sixties, although there is the occasional softness, and clearly a Lowry restoration doesn’t equate to cleaning all the dirt or repairing all the damage on the print, and little flecks and scratches remain. When it comes to the audio, no doubt you’ll lament the absence of the original mono track, but the surround isn’t too egregious an upmix, with the rears only occasionally making their presence felt. The dialogue may be a little low in the mix, but what surprised me with Thunderball is just how much ADR there is. The Bond movies were notorious for dubbing non-native English speaking actors, but even with Bond, you’ll note that his dialogue doesn’t always match his lips.

You get one disc in a BD Amaray case, with a UV code slipped inside. The disc boots to an animated menu.

The organisation of extra features appears to be common across the Bond Blu-ray discs.

You get two commentaries on this disc, one a patchwork commentary put together from interviews with director Terence Young, and some of the cast and crew. The second is a little more conventional, although still put together with comments from Editor Peter Hunt, Screenwriter John Hopkins, and others.

The Declassified: MI6 Vault is pretty loaded this time around with archive featurettes.

007 Mission Control is the usual glossary linking to appropriate points in the film, along with a 3:20 narrated travelogue.

If Dr. No was the prototype, then From Russia With Love was the first run at the real thing, establishing many of the Bond tropes, but closer to a conventional spy thriller than what was yet to come. It was Goldfinger that set the mould for the Bond franchise, giving us the Shirley Bassey theme song, and scenery chewing villains that were far more memorable and quirky than anything that had come before, as well as an outlandish global threat. The one thing that Goldfinger lacked was the budget. With Thunderball came the licence to print money, and every Bond since then, till the end of the Brosnan era did much the same thing; build big, blow up bigger, oodles of globetrotting glamour, and villains with daft plans and ridiculously extravagant secret lairs. Take the climax of Thunderball, with an underwater battle with harpoon guns, and transpose it to space, a battle between astronauts with lasers, and you have the climax of Moonraker. And both movies tend to send me to the land of Nod at this point.

I should like Thunderball. It’s got a great story, the action is more intense than ever before, and Sean Connery is at his best as the secret agent. Remember how in Dr. No, the sight of a woman in a bikini was enough to raise eyebrows and temperatures, here just a handful of years later, a beach full of bikinis and no one bats an eyelid. There’s more glamour and bigger production values than ever before. It’s pure good guys versus bad guys stuff, with S.P.E.C.T.R.E. effectively holding the world to ransom, and Bond in a race against time to thwart their evil plans. There are car chases, gun fights, fist fights, great stunts and action, and plenty of memorable set pieces, and ironic quips. And really, Thunderball might just be my least favourite Sean Connery Bond movie.

Two of the reasons I’ve already mentioned. The ADR is loose and obvious in this film, and it’s at such a level that I’m repeatedly distracted by it. Given that it’s the villains that have their voices replaced for the film, you need a good and accurate performance to sell to the audience, but Largo is no Goldfinger. Far worse is the whole underwater aspect of the film. There is just so much of it spent in the water, without dialogue quite naturally, and with the action in slow motion thanks to the viscosity of water. All that’s left to punctuate this half-rate action is the music, and John Barry slows things down whenever it comes to the underwater sequences, no doubt to add a sense of otherworldly wonder, but for me it always sounds like a lullaby.

Finally there is the editing. Certainly when it comes to the action, the fast paced, jump cuts may have been groundbreaking in 1965, but they seem a little clumsy now, but really, it’s in terms of the narrative that the editing falls down. Thunderball is long, maybe overlong at 2 hours and 10 minutes, but it feels to me that there is much of the story missing; certainly there are points in the film where we go from A to C and it seems we miss B altogether, and if a film makes you wonder if something is missing, while you are watching it, then something has gone wrong.