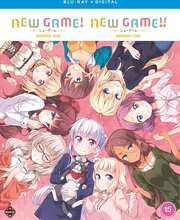 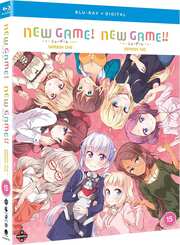 I went blind-buying anime again! Or as close to blind-buying anyone with Internet access to a World Wide Web of information can get these days. I haven’t seen a single episode of New Game, and neither have I seen a trailer. But I’ve read the blurb and a handful of opinions. It’s about a girl who gets her dream job in a videogame company. So far so Shirobako... Only I read that it’s nothing like Shirobako, which would be a shame, except it’s also described as one of the best slice-of-life shows in recent years. As long as no one is spirited away to another world, I’m willing to give this series a try, or rather two series, as for its UK debut, Manga Entertainment have collected New Game! Season 1, and New Game!! Season 2 (it’s all in the exclamation marks) together. 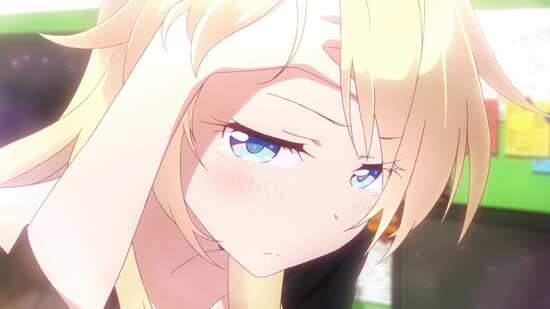 Aoba Suzukaze might just be the luckiest girl around. Just out of high school, and she’s already scored her dream job. As a kid, she fell in love with the Fairies Story videogame, and became a fan of the character art and the creators behind it. Now she’s starting work at Eagle Jump, the company behind the game, and she’s actually training as a character designer under her idol Ko Yagami. What’s more, her first project is to create characters for Fairies Story III. But there is a lot that Aoba has to learn about office life. 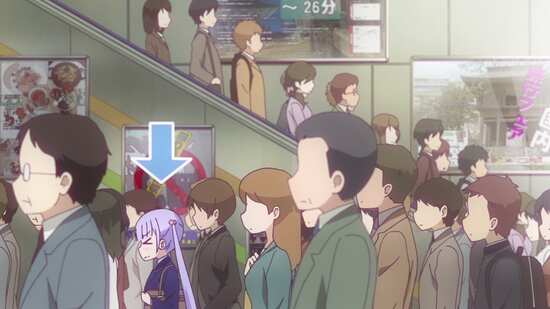 Disc 2
10. Full-Time Employment Is a Loophole in the Law to Make Wages Lower
11. There Were Leaked Pictures of the Game on the Internet Yesterday!
12. One of My Dreams Came True! 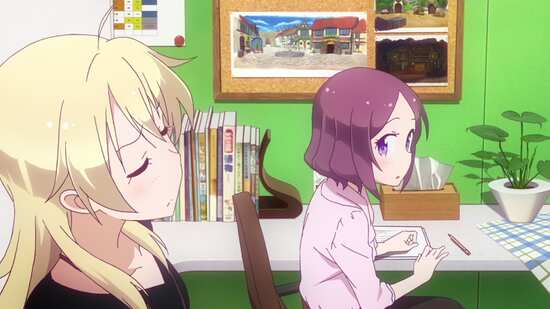 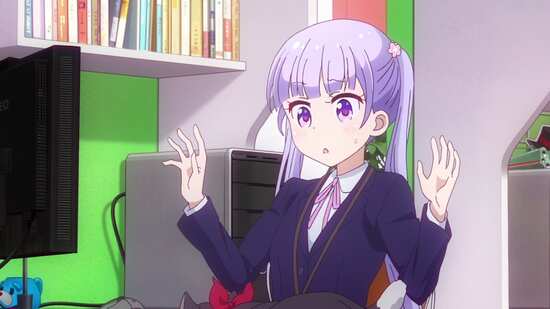 The two New Game series get 1.78:1 widescreen 1080p transfers on these discs, and the show looks pretty good. The image is clear and sharp, there is a whole lot of otaku detail in the background and settings, as you would expect from a show about video game developers, while the character designs are as cute and appealing as you would expect from a slice of life show. The girls are all distinctive and memorable, although there are one or two moments of out of place fan service to navigate. There are no problems like aliasing, compression or banding to mar the experience, and all in all, New Game is a delightful show to watch. 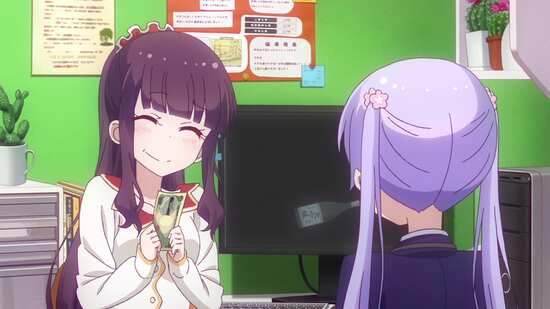 You have the choice between Dolby TrueHD 5.1 Surround English and 2.0 Stereo Japanese, with subtitles and signs locked during playback. I stuck with the Japanese audio throughout, and was happy with the experience. The actors were suited well to their roles, and the show gets some nice themes and incidental music. I was never tempted to skip a theme song. The audio is free of glitches and dropouts, while the stereo is adequate for what is mostly a dialogue focused piece. The subtitles are accurately timed and free of typos. 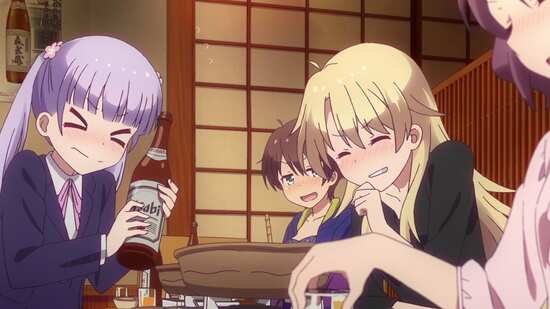 You get 4 discs on either side of two centrally hinged panels in a BD Amaray case. There is an o-card slipcover repeating the sleeve art and blurb, and there is some artwork on the inner sleeve. The discs boot to static menus. 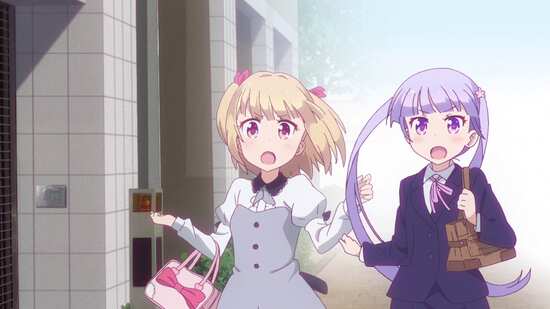 The extras on disc 2 comprise the textless credits and trailers for Castle Town Dandelion, Dagashi Kashi and No-Rin. 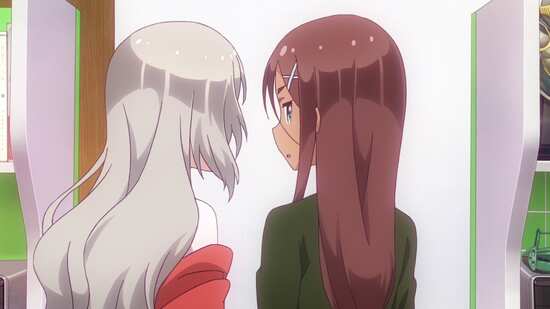 Disc 4 has the opening credits and two sets of end credits without text, as well as trailers for A Centaur’s Life, Tsuredure Children, Dagashi Kashi, and My First Girlfriend is a Gal.

It’s odd that such an entertaining show with such decent production values gets just the cursory, disposable extras, not even the usual Funimation sop of dub voice actor commentaries. 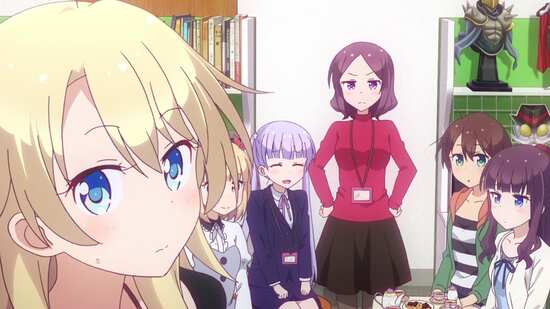 To be brutally honest, I didn’t need New Game in my life. It’s certainly not the exposé into the game industry that Shirobako was to anime. As a slice of life entertainment it’s not on a par with the genre leaders like K-On and Non Non Biyori. Then again, not every show has to be an exemplar of its genre or has to break new ground with its storytelling. I may not have needed New Game, but I certainly enjoyed every minute in its company, found the characters to be adorable, and hung on their every little adventure and interaction. 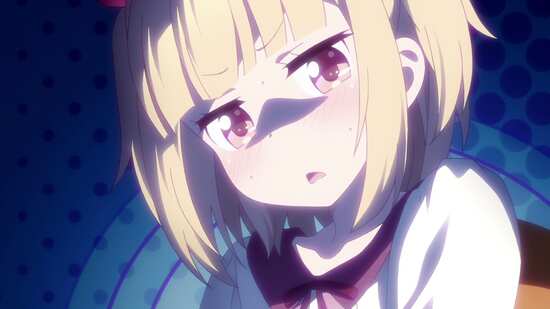 Certainly the show is about a video game company called Eagle Jump, and it gets to know the employees and some of their friends and family over the course of around two years, enough time to bring two new games to the market, and ostensibly we follow the creation of both of those titles. But we really only get a cursory look at the process, a little bit of code here, some debugging there, a fair bit of character design, but mostly shots of programmers crashed at their desks among empty tins of energy drink. Really New Game is all about the characters. 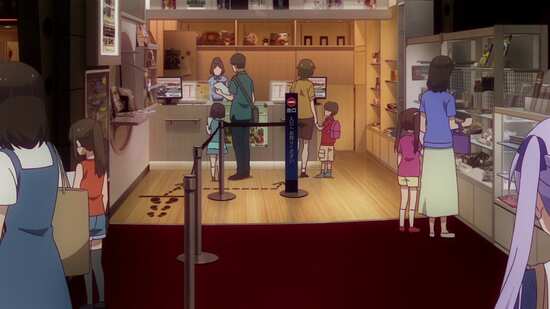 The show follows aspiring character designer Aoba Suzukaze from her first day at work at Eagle Jump. She’s a fan of Eagle Jump’s games and their top character designer Ko Yagami in particular, and she has her dream job, training as a character designer herself on Ko’s team. She’s the only new recruit in that particular year, and she joins shy and reserved (although communicative by text message) Hifumi, Yun is another character designer who is fairly conventional, although she has a rowdy friendship with the motion designer Hajime, an athletic and brash girl. Umiko is head of the programming department, a stern girl with an obsession with airsoft, and a tendency to ‘shoot’ people who introduce spec changes in the middle of a project. That would be the leader of the company Hazuki, an older woman who is quick to tease, and who likes working with young, cute girls, which explains why Eagle Jump is a wholly female workplace. There is also Rin, the art director who is Yagami’s best friend and in many respects keeper, essential given Yagami’s tendency to scruffiness, and sleeping in her panties in the office when she works late. 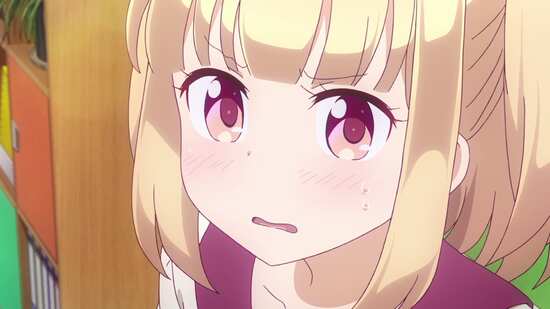 We also meet Aoba’s childhood friend Nene, an eternal child even if she’s a college student, who is probably the cutest thing in the show. She supports Aoba, and worries about the work environment, and goes as far as getting a part time job at the company play-testing and debugging to keep an eye on her friend. In the process she gets bitten by the programming bug herself, and by the second season she starting a proper job at Eagle Jump, and alongside her we get two new characters, Narumi and Momiji who join the programming and character design teams respectively, to add a little conflict into the story, and to give Aoba someone to mentor, and pass on what she learns. 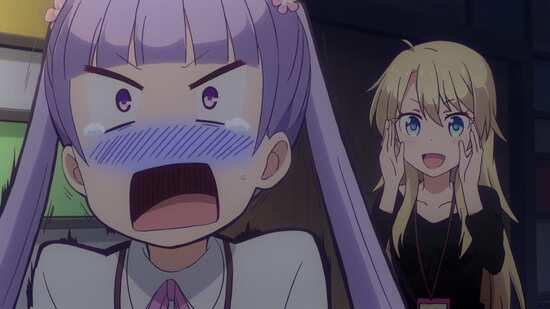 The show is really about the relationships that develop between these characters. The show begins when Aoba starts work, and we can assume that she joins a company that has been that way until her joining. She’s the new random element thrown into the mix, and the existing relationships have to shift and reform to accommodate her, and she starts to change in return. She starts as a fangirl, eager to meet her heroes, and instantly gets her illusions shattered when she’s introduced to Yagami’s butt as she lies sleeping under her desk. She makes the faux pas of actually speaking to Hifumi, a girl so wary of human interaction that she will communicate by text with the person sitting next to her. By the time she meets the company mascot, an overweight cat named Mozoku, she’s probably having second thoughts about working there, but gradually she starts to fit in and find her feet. 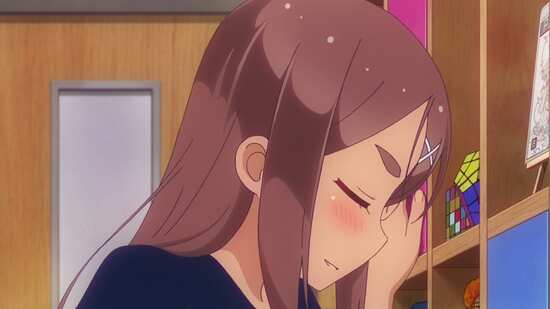 About the only real thing that we learn about the videogame industry is the plethora of long work days, with most days ending past 9pm. Generally the show feels like a short form sketch show, with each episode unfolding as a series of humorous interactions between the characters. When we do learn something new about the characters it comes as a surprise, such as Hifumi’s pet hedgehog, and her love of cosplay, or Hajime’s love of kids’ entertainment. The work is to New Game what music is to K-On! It’s authentic and believable when we see it, enough to make you interested in a fictional videogame, but it’s really only a garnish to a show where girls talk, have fun and occasionally drink tea. 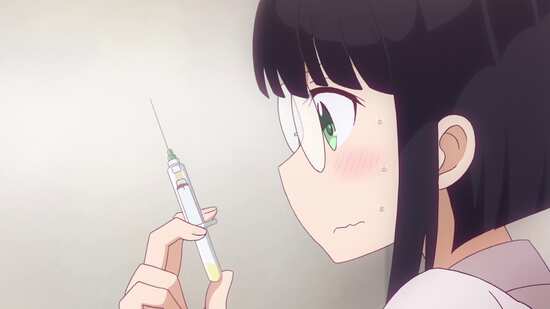 New Game may not be the best at what it does, but it’s still remarkably enjoyable, and the office setting coupled with the videogame industry perspective at least gives it something original for its characters to be cute about. And when it comes to entertaining the audience, and making us feel good, New Game does exactly what it needs to. It’s not original, but it is fun, and usually that’s all you need from a show. The Blu-ray presentation is excellent, although the discs are regrettably barebones. Shows like this tend to have short bonus animations, and I wonder if there were any for New Game that we are missing out on.